In a rough and tumble roundtable meeting at FERC headquarters in Washington, DC, electric generators and grid operators, most of them from the Northeast, said they want natural gas markets and infrastructure altered to meet their peak demand needs. Gas pipelines and producers who rallied to defend their market made it very clear that they don’t think it needs radical changes. 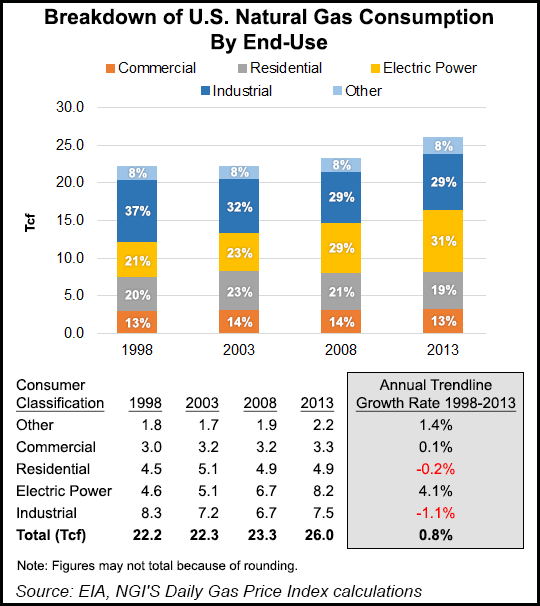 By the end of the nearly three-hour session of robust debate Thursday afternoon, Commissioner Philip Moeller — who had called the meeting and was the only commissioner in attendance — was taking pains to reassure the natural gas side of the debate that the Federal Energy Regulatory Commission is unlikely to take any drastic action anytime soon to resolve the differences.

“I don’t know what will happen next,” Moeller told the packed meeting room. “Let me be absolutely clear, this was a meeting that I called; it is not a FERC official proceeding, despite the fact that we have an eLibrary docket [AD14-19-00]…this could absolutely go into a docket and never get touched again.”

But, Moeller said, it would be better to solve differences between gas markets and northeast power generators by agreement now than to wait for FERC or Congress to mandate a solution.

Moeller convened the meeting to explore the concept of developing an electronic information and trading platform for natural gas that would contain bids and offers for the purchase and sale of both commodity and capacity for receipt and delivery points across multiple pipeline systems (see Daily GPI, Aug. 20). The meeting, which was attended by about 220 people, was not transcribed or available by webcast or telephone by FERC. Gathered from around the country were representatives of natural gas pipelines, producers, electric and gas utilities, industrial end-users, power generators, grid operators, commodities trading platforms and exchanges and more. More than a few were the somewhat aged, but familiar faces of industry members who helped FERC put the market back together after the Enron debacle more than a decade earlier.

At a FERC technical conference held earlier this year, Donald Sipe, an attorney with law firm Preti Flaherty representing the American Forest and Paper Association, who was added by Moeller to the speakers list that day, recommended that FERC “investigate and possibly order the implementation of an information trading platform for natural gas that looks somewhat like the RTO [regional transmission organization] trading platforms that you have for electricity, in the sense that you would have an operability region; you would take bids and offers for sale of capacity and commodity both; you would have, if not a clearing mechanism, at least a central confirmation mechanism that would manage offers on a short-term basis. You would do this across utility footprints” (see Daily GPI, April 1).

Much of the debate Thursday centered on Sipe’s proposal. Northeast grid operators and power generators argued that they need to know the price of gas that they have to buy at a moment’s notice. Revamping both the process of buying natural gas and the pipeline system that brings gas to them may be the answer to their problems, they said. Speakers from the natural gas side of the equation would have none of it.

“The problem we’ve got here is, who pays for what is desired?” said Don Santa, CEO of the Interstate Natural Gas Association of America. “Where is the wherewithal for those who want these capabilities, in terms of the infrastructure to support the services, to be able to pay for it, so that those who provide the infrastructure can respond to it? I think that until you solve that — and it’s another big chicken-and-egg aspect of this whole discussion — it’s largely academic…To me, that’s the fundamental nut that’s got to be cracked to solve this.”

That raised some hackles on the electric side of the table.

“We’re willing to pay for it, but if you’re going to say it’s working as it is, it’s just not,” said Michael Kormos, PJM Interconnection executive vice president for operations. “…Maybe it’s not the most economic solution, but if the gas side can’t be flexible enough to meet our needs, then our answer’s got to be…that we need to go to dual fuel and something else. And at the end of the day, we’d like to see the most efficient service, but we truly believe there has to be some changes…

The problem with Sipe’s proposal, according to many on the natural gas side of the debate, is a basic misunderstanding of natural gas markets and infrastructure, and a significant underestimation of the amount of investment needed to convert it to a system that would provide immediate, customized service to utilities and grid operators nationwide.

“The pipeline grid is a heterogeneous grid, and it’s been developed and customized to meet the needs of the end-users that are attached to each individual pipeline,” said Kinder Morgan’s Bill English. “To the extent that the generators are looking for more hourly or flexible service, there has to be a significant investment in order to provide that. The idea that you can have a bullet line and then just say, ‘well, I don’t need the next 12 hours of gas,’ I can see how as a pipeline person that does create a problem because they don’t have a place to put it, and it’s not their gas. The generator has to turn around and find somebody to sell that gas to. The pipelines don’t have title to this commodity. The commodity may be homogenous, but the grid itself is not, and it’s up to person who owns the commodity to move it.”

“If you’re trying to do everything to least cost dispatch in five-minute increments, at some point you do have to reconcile the fact that you are using a fuel that’s only moving at 23 mph, and electricity is moving at the speed of light, and there’s going to be a disconnect,” said Christine Tezak, managing director of ClearView Energy Partners LLC.

“We believe that natural gas markets work fairly well today,” said National Fuel’s Michael Novak, speaking on behalf of the American Gas Association. “Not that there isn’t always room for improvement, and we’re always open to working to improve them, but we think changes should be incremental…if the changes that are proposed are too radical, we feel there might be unintended consequences that may that would be destructive to the market.”

Utilities from the Southeast said natural gas markets are currently working well for them and said they were concerned about potential impacts from the changes Sipe is seeking. “We don’t see the type of weekend issues or off-peak hours issues that I’ve seen discussed here,” said Florida Power & Light’s Jerry Yupp. “We’re able to find the gas we need dealing directly with suppliers, not through an electric platform on the weekends.”

Several speakers said they hadn’t seen any detailed analysis of the problem Sipe is trying to address. “One of the things that hasn’t been intuitive to me is a real quantification of the problem,” Tezak said. “How much inefficiency are we really talking about as we look across the broad pyramid of natural gas in the market? Are we chasing $10 million in efficiency here, or are we achieving $1 billion in efficiencies? That’s really unclear.”

“I quite frankly was a little bit disappointed that Don Sipe didn’t supply more details about this proposal,” Santa said. “Because part of what has been concerning us about this is the fact that the proposal is at such a high level that we can’t help but be led to conclusions as to what is going to compel in terms of the changes needed on the gas side profoundly…there’s good reason to believe that this would not be fixing around the edges; there’s good reason to believe that this would effectively compel a restructuring of the gas industry. Is that where we really want to go?”

Sipe was unclear about whether participation in the trading platform would be voluntary or mandatory, saying only that he didn’t understand why traders wouldn’t want to participate. Gas marketers said they would want to be able to serve buyers even if they didn’t want to post their bids in a public forum. Some also said the products they sell are too complex and too unique to adequately describe in a trading platform.

Moeller encouraged speakers and others to file comments to be included in the docket, which was not yet available on the FERC website Friday afternoon. Comments are likely to be available through the docket around the first of October, a FERC spokesman told NGI.

Earlier this year FERC issued a notice of proposed rulemaking (NOPR) that would tackle the long-running and increasingly nettlesome issue of gas-power coordination by shaking up the natural gas day (see Daily GPI, March 20). Thursday the Natural Gas Standards Board weighed in with its own proposed revisions, which did not include references to the gas day, leaving that decision to FERC (see related story).