July natural gas futures charged like a lion Monday, surging 12.1 cents from Friday’s levels as a historic heat wave continued to smother the Pacific Northwest, leading to pipeline issues and amplified demand. Notable heat also blanketed the East Coast, and with forecasts pointing to more hot weather ahead, the July Nymex contract extended its streak of gains to five days, expiring at $3.617. August, which takes over the prompt-month position on Tuesday, jumped 7.3 cents to $3.593. 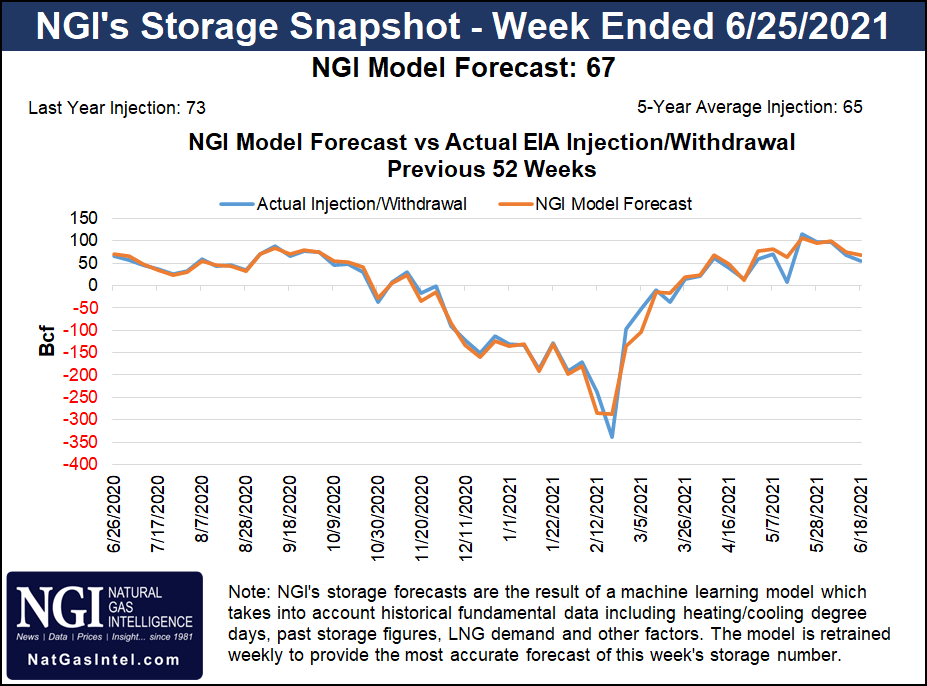 The scorching temperatures in the normally mild Pacific Northwest soared to “unheard of” heights beginning over the weekend, with Portland, OR, setting back-to-back records, according to AccuWeather. On Saturday, daytime temperatures climbed to 108 degrees and on Sunday, they hit a “staggering” 112 degrees. Before this weekend, the highest temperature ever recorded in the city was 107, set once in July 1965 and twice in August 1981, the forecaster said.

“Temperatures of 110 degrees or greater are virtually unheard of west of the Cascades,” AccuWeather senior meteorologist Randy Adkins said.

Records also were broken in Seattle, which shot up to 104 on Sunday. It was the second day in a row that temperatures crested the century mark, a record in itself.

The blistering conditions in the region combined with impressive heat on the East Coast to send futures prices higher early in the session. Although the prompt month opened the session slightly in the red, the July contract had climbed nearly 6.0 cents higher before 9 a.m. ET. The moderate gains occurred in the face of a slightly cooler outlook for the eastern United States beginning late this week. However, traders quickly brushed off the near-term data since weather models indicated that hot weather could return as soon as next week.

NatGasWeather said an upper high pressure is set to expand toward the eastern United States by July 6, resulting in highs in the mid-80s to 100s over most U.S. regions. The forecaster expects national demand to strengthen at that time and remain elevated through at least July 12.

Bespoke Weather Services said it is not uncommon for prices to rally on expiration day, regardless of any specific data point. That said, the market remains tight, in its view.

Recent storage inventory data has driven that point home. The Energy Information Administration (EIA) last Thursday reported that inventories for the week ending June 18 rose by only 55 Bcf. The smaller-than-average injection expanded the deficit to the five-year average to 154 Bcf.

Bespoke said the next couple of EIA stats will not be as tight. However, until the market can loosen enough to stop increasing the deficit to the five-year average storage level, it is difficult to build a bearish case. “Our projection is that the next few weeks still inject less than the five-year average.”

As for this week’s EIA report, NGI is modeling a 67 Bcf increase in storage stocks. This would compare with last year’s 73 Bcf injection and the 65 Bcf five-year average, according to EIA.

Spot gas prices rallied on Monday as most of the country was experiencing hot summer weather. California, the Rockies and Western Canadian markets recorded the largest gains as weather maps continued to show deep hues of orange across those regions through much of the week.

Temperatures could shatter more records in the days ahead, according to AccuWeather. The searing conditions are a result of a dominating area of high pressure, known as a heat dome, that is heating up all layers of the atmosphere and extending into Western Canada.

The magnitude of the heat in Western Canada may be rivaled only by the prolonged heat wave of July 1936 in Manitoba and Ontario. That particular heat wave lasted for nearly two weeks, AccuWeather said.

On Sunday, Lytton in British Columbia recorded the highest temperature ever in Canada’s history as the thermometer soared to 116 degrees (46.6 C). The previous record in Canada was 113 (45 C), set on July 5, 1937, in Midale and Yellowgrass, Saskatchewan.

The scorching temperatures were having major impacts on the gas market.

Wood Mackenzie said pipelines in the Northeast and West regions had posted operational flow orders and capacity constraints in preparation for the sweltering heat and high demand.

In the Northeast, Dominion Transmission, Iroquois Gas Transmission and Tennessee Gas Pipeline announced restrictions that were to be in place for several days this week. In the West, Gas Transmission Northwest said it would continue to restrict capacity at the Flow Past Kingsgate (LOC# 3500) location. However, it raised the available capacity to 2,400 MMcf/d for Monday and to 2,052 MMcf/d for Tuesday’s gas day through the July 9 gas day.

Meanwhile, some utilities in the Pacific Northwest over the weekend called for energy conservation to cope with the strong demand. Despite the efforts, a few thousand customers of Oregon’s Portland General Electric and Washington’s Puget Sound Energy remained without power on Monday afternoon.

Prices along the Gulf Coast posted similar gains despite heavy rains in the region. Thunderstorms in the region could produce up to 4 inches of rain in a very short amount of time, according to the National Weather Services (NWS).

Meanwhile, an area of low pressure approaching the Southeast has been highlighted by the National Hurricane Center as having a medium chance of tropical cyclone formation, the forecaster said. Regardless, the system is expected to swing onshore by Monday night and produce isolated pockets of heavy rain over southeastern Georgia and southern South Carolina.

The NWS also was monitoring another tropical disturbance over the central Atlantic Ocean. As of 2 p.m. ET, the tropical wave was producing disorganized showers and a few thunderstorms. Some slow development was possible after the middle of the week while the system moves westward to west-northwestward. It was likely going to reach the Lesser Antilles by Wednesday night, according to the forecaster.