Oklahoma City-based Roan Resources Inc. has raised its oil and natural gas production guidance for 2019 even as capital spending is coming down. 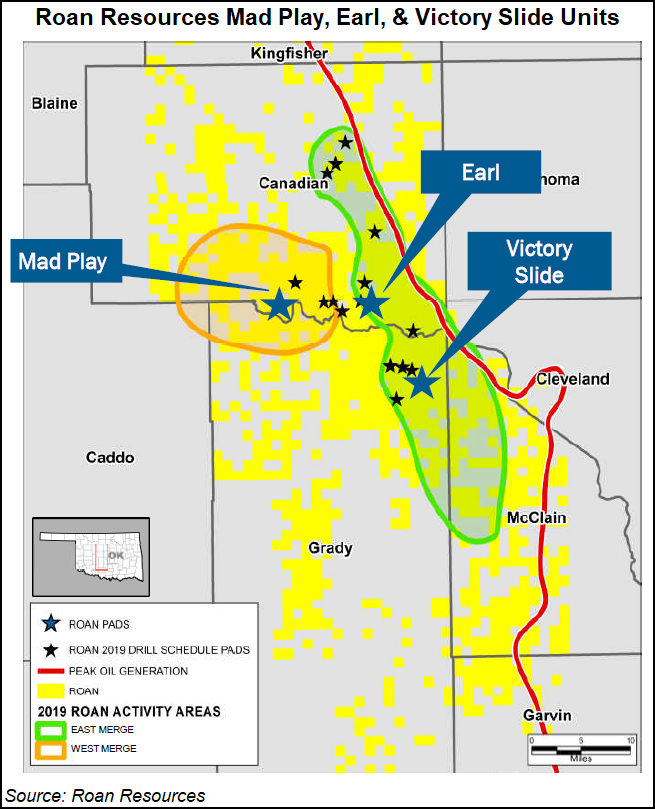 Roan expects to produce at least 50,000 boe/d during the second quarter, which, accounting for ethane rejection, is equivalent to 49,000 boe/d.

Because of decreasing drilling and completion costs, the independent producer, which concentrates its exploration in the Midcontinent, mostly Oklahoma, is now projecting capital expenditures to be about 10% lower than the original second quarter projection of $155 million.

“We remain focused on executing on our development program and achieving free cash flow by the fourth quarter of 2019 while still growing production 20-25% year over year,” said Executive Chairman Joseph A. Mills. “With respect to operations, based on preliminary results, our second quarter production results are outperforming on a lower capital spend.

“We are expecting several strong wells to come online through July that will further exemplify the meaningful operational optimizations the company has made. In addition, the company remains very engaged with the strategic initiative process with its advisers,” he said, and has executed “multiple” nondisclosure agreements “with interested parties.”

According to management, the Mad Play unit, along with the Mayes wells from the Earl and Victory Slide units, continues to see strong production. A four-well Mad Play unit had an average 30-day initial production (IP) rate of 1,602 boe/d per well that was 44% weighted to oil, 36% to natural gas and 20% to natural gas liquids (NGL) on a 10,000 foot lateral.

Roan said 14 gross operated wells could be turned online this month and into July. These wells, said management, are spaced and being completed as part of its development program this year.