Hurricane Rita weakened slightly Thursday afternoon, dropping to a Category Four with 145 mph winds from a peak of 175 mph, and with a track moving away from Houston, the National Hurricane Center has reported. The hurricane continued on a northwesterly track through the Gulf of Mexico, but its path continued to edge more north than west, pointing the storm through the heart of the offshore oil and gas production area and aiming toward landfall late Friday or early Saturday Near Port Arthur, TX near the Texas-Louisiana border.

Even with the weakening, the NHC is forecasting Rita to be a dangerous Category Three hurricane when it comes ashore. Hurricane warnings are up from Port O’Connor, TX to Morgan City, LA. Tropical storm warnings are in effect on either side of the warnings. The projected landfall of the storm has been steadily moving to the east, from a point originally near Corpus Christi, far south along the Texas Coast early in the week to Galveston Bay and Houston Thursday morning and closer to the Louisiana border Thursday afternoon.

Of the 819 manned platforms in the GOM, 605 had been evacuated as of 11 a.m. Thursday, and 87 of the 134 rigs were evacuated, according to the Minerals Management Service, which also had been evacuated from its temporary office in Houston. The MMS survey staff, shunted off to Houston by Katrina now has left Houston ahead of Rita and is operating out of the MMS headquarters office in Herndon, VA outside Washington, DC. Other MMS Gulf Coast offices also have been shut down. Industry can continue to submit shut-in reports by e-mail to evacstats@mms.gov or fax reports to 703-787-1284 or 703-787-1093. Contact Jason Mathews at (703) 787-1250 with questions.

Most of the rest of the industry also had evacuated their coastal facilities and Houston offices, with critical operations being relocated to other points in Texas and as far away as Baltimore, MD and Phoenix, AZ.

The latest MMS stats Thursday had shut-in gas offshore in the Gulf at about 6.6 Bcf/d, but a survey both off and onshore by Bentek Energy put shut-in volumes at 8.3 Bcf/d while only about 5,541 MMcf/d was scheduled to flow Thursday compared to 13,820 MMcf/d on Aug. 26.

“We continue to live history as this incredible Hurricane Season of 2005 unfolds more stunning surprises,” said Dr. Jeff Masters of The Weather Underground. “Rita has peaked in intensity as the third strongest hurricane of all time, with a pressure of 897 mb and 175 miles per hour winds. She is on the decline now, as the 7:30 a.m. hurricane hunter mission found a pressure of ‘only’ 907 mb and winds five mph weaker. The hurricane hunters also found evidence of a concentric eyewall forming outside of the main inner eyewall, and the inner eyewall had begun to take on an elliptical shape.

“All these signs indicate that Rita will continue to weaken today as her inner eyewall collapses and an eyewall replacement cycle begins. Additionally, Rita is about to leave the vicinity of a warm eddy of Gulf water called the Loop Current that has been aiding her intensification. Also, 10 knots of shear has developed on her south side, thanks to the fact that the upper-level high pressure system that was providing such excellent outflow for Rita has now shifted to the southeast of the storm. All these signs point to a substantial weakening trend for Rita that will continue through Friday and probably reduce her to a Category Four hurricane. The GFDL forecast model predicts that this weakening trend will continue until landfall Saturday, when Rita will be a Category Three hurricane.

“While this is cause for some relief, Rita, like her weaker sister Katrina did, will still bring a Category Five level storm surge along a 60-80 miles stretch of coast to the right of where the storm makes landfall on Saturday. Storm surge heights will peak at 20-25 feet in some bays, and bring the ocean inland up to 50 miles from the coast. Large sections of Interstate10 between Houston and Beaumont will be inundated, and the flood waters will reach the cities of Beaumont, Orange [TX] and Lake Charles [LA]. Wind damage will be severe, and Houston can expect a hazardous rain of glass from its high rise buildings like what was experienced during Hurricane Alica in 1983. If the eye passes just west of Galveston Bay, the storm surge will push 1-3 feet of water into some of Houston’s eastern suburbs, such as Deer Park.”

Duke Energy, Kinder Morgan, El Paso and other energy companies said facilities in Houston were to be staffed by essential employees only on Thursday and Friday. Duke Energy Gas Transmission (DEGT) was securing facilities that potentially lie in the storm’s path. DEGT’s offshore system continues to operate, and the company’s gas control operations in Houston are being relocated to back-up facilities. DEGT anticipates having certain Texas facilities unavailable for service.

Duke Energy Field Services (DEFS), based in Denver, is shutting down its natural gas gathering and processing facilities in the Mobile Bay, AL, Houston and South Texas areas because these facilities are in the projected path of the hurricane. DEFS has also relocated its gas control operations to back-up facilities as well. Other natural gas gathering and processing facilities in west and central Texas, and southeastern New Mexico also are being shut-in because refineries and fractionators along the Gulf Coast affected by the hurricane are discontinuing their operations, resulting in a lack of natural gas liquids take-away capacity.

Duke Energy North America has no operating facilities in the path of the hurricane. However, critical staff, power and gas traders and schedulers were being relocated temporarily to other sites so those obligations could be met.

Kinder Morgan reported that it has evacuated workers from two compressor stations in Cameron Parish, LA, and Liberty County, TX, but is continuing to operate its natural gas pipelines at reduced levels, resulting in some curtailments in firm transportation, particularly on Natural Gas Pipeline Co. of America’s (NGPL) Louisiana Line.

Texas Eastern said it has or will be evacuating facilities in its South Texas and West Louisiana zones, meaning multiple compressor stations in the zones will be shut down and capacity will be reduced. Tetco is restricting receipts at certain locations in order to protect the integrity of its system.

Columbia Gulf Transmission said Thursday that it was experiencing a significant loss of supply.

El Paso said the business systems for its El Paso Natural Gas, Colorado Interstate Gas, Mojave, Wyoming Interstate Company and Cheyenne Plains pipeline systems are supported through a data center in Houston, which may have to be evacuated. However, it was not expecting to have to switch to a backup location. The company said a number of liquids handling facilities along the Gulf Coast have been or are likely to be shut down, which is likely to impact supply availability. Processing plants in the West frequently send their liquid products to the Gulf Coast. As a result, some western gas supply has been shut in for lack of processing. If this trend continues, El Paso said it would work with processing plant operators to maximize flow, but its ability to absorb the problem is “very limited.” El Paso’s pipelines were accepting nominations for the entire weekend on Thursday.

Southern Natural said the force majeure for receipt points upstream of Toca in Louisiana continues until personnel can verify the integrity of its facilities following damage from Hurricane Katrina, however progress has been halted due to Rita. “In addition, we expect that some reassessments of our facilities will be required as a result of Hurricane Rita.” Southern said that it completed the depressurization of all lines entering and leaving its Main Pass 298 junction platform, which suffered major structural damage during Katrina. “We are continuing to work on plans that will address the damage on a temporary and permanent basis.”

Trunkline LNG said it has shut down its LNG terminal, and ship unloading and sendout would not be available until further notice.

Sea Robin personnel at the Erath compressor station were ordered to evacuate and the offshore system may have to be shut in. 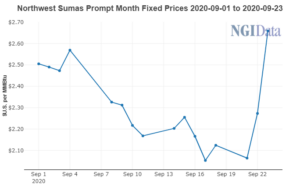 After sliding for much of the month, natural gas forwards rocketed higher during the Sept. 17-23 period as export demand steadily increased and on cooler changes to the long-range forecast. October prices jumped an average 17.0 cents during that time, while November launched 23.0 cents higher on average, according to NGI’s Forward Look. Strong, double-digit…