Fermaca’s crossborder Wahalajara pipeline system connecting the prolific Permian Basin to the city of Guadalajara and connections is driving energy demand in Mexico’s central-western region and turning the Waha hub in West Texas into a pricing point in Mexican natural gas transactions. 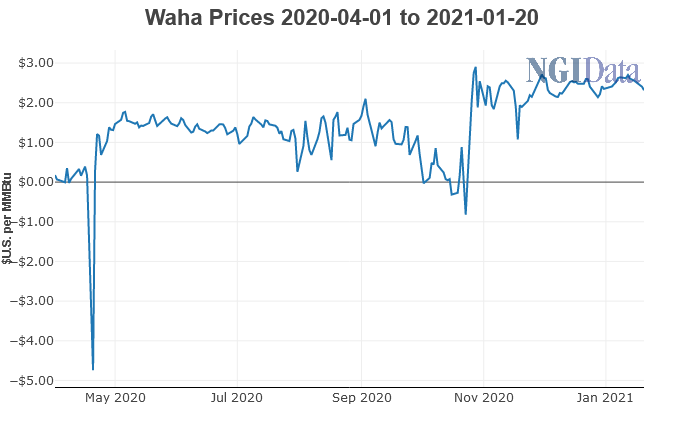 That’s according to Santa Fe Gas LLC’s Santiago Garcia, who is CEO of the marketing affiliate of Fermaca. Santa Fe was the first marketer to gain rights to commercialize natural gas in Mexico after the country’s landmark 2013-2014 energy reform.

“We are seeing growing natural gas demand in Guadalajara and Bajío, which used to be areas with supply issues and critical alerts,” he said Thursday at Industry Exchange LLC’s 6th Mexico Infrastructure Projects Forum. “Right now, Houston Ship Channel is the index most used in Mexico, but Waha has entered the picture and we are seeing good acceptance of it.”

Garcia said demand in particular in the central Bajío is being spurred by greenfield fertilizer and power projects, as well as increased industrial use as companies migrate to natural gas and expand their productive processes.

In October, Genscape Inc. projected that with the commercial flows beginning from the Wahalajara system’s lower leg, Villa de Reyes-Aguascalientes-Guadalajara (VAG), West Texas border flows to Mexico were expected to average around 1.5 Bcf/d for 4Q2020, up by almost 590 MMcf/d from 3Q2020.

The Santa Fe executive said as a result of gas flows from West Texas he expected three indexes to develop along the system at Encino, Guadalajara and Villa de Reyes within the span of about five years.

While it’s taking time for local indexes to emerge, “what we are seeing with Waha, which wasn’t thought of a few years ago but is now being accepted,” demonstrates flexibility and a willingness for indexes in the market, Garcia said.

The interconnection of the Wahalajara system with Mexico’s Sistrangas national pipeline grid in Guadalajara has helped marketers as well as local distribution companies, Viñas said, by providing stability and greater reliability to the system.

Waha volumes are now displacing Mexico’s liquified natural gas imports at its Manzanillo terminal, and should see greater access in the Mexico market with the commercial startup of Grupo Carso’s 472 MMcf/d Samalayuca-Sásabe pipeline. The pipeline is in the testing phase and slated to enter service early this year, connecting West Texas gas supply with the Sásabe area of northwestern Mexico.

Although natural gas prices across the board are expected to rise this year, RBN Energy LLC analyst Jason Ferguson said production in the Permian has recovered from the coronavirus-induced slump to 11.5-12.0 Bcf/d, on par with 2019. It’s forecast to be around 12.5 Bcf/d by late 2021.

Speaking at the Mexico Infrastructure event, BP Energy Co’s Pedro Elio said the gas market in Mexico continues to advance, with clients renewing their contracts in 2020 and even opting for longer term commitments, “which speaks to the benefits of natural gas.”

He said despite the lack of a robust secondary market and open seasons on the Sistrangas, BP now markets on some of the new pipelines, including the 2.6 Bcf/d Sur de Texas-Tuxpan marine pipeline and Wahalajara.

“We’re entering our fifth year in the market,” Elio said. “They have been interesting years and each month we have learned and got new information. Sometimes we’ve had to be creative, but gas has flowed to users, and the market has shown great results.”

BP is transforming to a low- carbon future, with natural gas central to the energy transition.

Mexico’s Alfa’s Robert Blanco, president for Gas and Power, said during the event that Mexican gas buyers are also benefiting from the market opening and are seeing more commercial options.

“We’ve seen a slow and favorable evolution in terms of options for users, and there are lots of options for importing gas,” including Wahalajara, he said. Challenges for buyers, said Blanco,  include securing long-term natural gas supply contracts and lining up seasonal nomination cycles in the United States and Mexico.