After multiple setbacks, liquefied natural gas (LNG) demand ramped up in a big way during the Oct. 15-21 period, tightening up supply/demand balances and boosting natural gas forward prices across the country, according to NGI’s Forward Look. 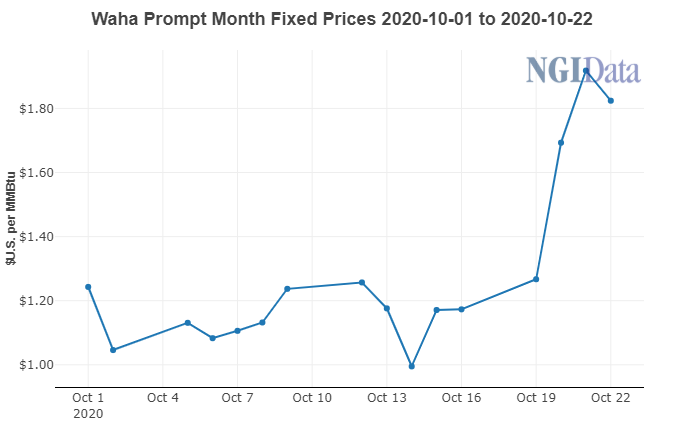 November prices jumped an average 26.0 cents for the period, with double-digit gains extending through the winter months (November-March). Prices for next summer (April-October) and the 2021-2022 winter each climbed an average 6.0 cents.

Markets across the Lower 48 closely tracked benchmark Henry Hub prices, which hobbled along early in the Oct. 15-21 period and then rallied Tuesday on word that LNG traffic soon would be able to resume from two major Gulf Coast facilities. Various obstructions were blocking deep draft traffic near the Sabine Pass and Cameron terminals over the past couple of weeks.

“LNG demand has been volatile, weather modeling runs have been erratic and even usually stable production has been fluctuating by several Bcf/d,” said EBW Analytics Group.

At least on the LNG front, feed gas flows appeared to be stabilizing. Feed gas flows on Monday were at a weekly low of 7.26 Bcf but jumped above 8 Bcf on Tuesday and remained above that level on Friday, NGI data showed.

The same can’t be said for weather, however. After a turn colder on Wednesday, the latest models dropped some demand from the 15-day outlook. Bespoke Weather Services said there was plenty of cold weather on the way over the coming week, especially from the Rockies to the Midwest and even down into parts of the South. Some heating degree days showed up all the way into Texas.

However, the pattern finally looks to be progressing in the warmer direction after the opening days of November, as models advertise a lack of blocking on either side of North America, according to Bespoke. The data also builds a stronger, warmer upper level ridge over the middle of the nation late in the period.

“We are about to the time of year where weather changes will be the primary driver of price action. Yes, the balance is still very tight, but will likely loosen somewhat with higher prices, relative to how super tight we have been, not to anything close to ‘loose,’” the forecaster said.

However, the potential for a higher-end warmer change in the coming days keeps its sentiment at slightly bearish. “Perhaps any reaction to warm weather, should our forecast ideas come to fruition, waits until after November expiration, but it is just hard to envision sustaining a rally higher than where we are now in the face of a truly warm, low-demand regime, at least for a while yet.”

The more tempered weather demand outlook for early November may bode well for storage. Although U.S. inventories maintained a hefty 400 Bcf-plus surplus over historical levels throughout the summer, the last two government inventory reports have reflected a quick reversal in that trend.

“Market attention is quickly turning to the upcoming winter withdrawal season as the current weather outlook and underlying supply and demand dynamics indicate a breach of 4 Tcf could now be off the table,” Mobius Risk Group said.

Participants on The Desk’s online chat Enelyst said the latest EIA figure, which was slightly below consensus, may lead them to revise their estimates slightly lower for the coming weeks. However, with gas prices above $3.00, Bespoke expected to see some loosening going forward, as higher prices impact power burns.

Gelber & Associates Inc. natural gas analyst Dan Myers agreed that power burns would likely decline over the next few weeks as cheaper coal replaces gas in the generation stack. “The market could lose around 1.5-2 Bcf/d of power demand compared to last year at these prices.”

Analysts at Tudor, Pickering, Holt & Co. (TPH) shared a similar view. They see the inflection point for winter demand hitting in the next week or two, allowing local pricing in regions like the Northeast to appreciate meaningfully. As this happens, a swift gas-to-coal shift is expected to take place in the power stack, and TPH is modeling a year/year drop in power generation of around 3.5 Bcf/d over the winter.

“This will nearly wipe out the estimated 4 Bcf/d undersupply” that’s been reflected over the past month and “allow the market to find a new equilibrium around current strip pricing, resulting in winter draws roughly in line with the five-year average,” TPH analysts said.

Still, there are several risks to the gas outlook going forward, according to EBW. The firm said November weather is “critical” to the price trajectory because of its effect on market perception of supply adequacy for the balance of winter. Last year for example, transient cold shots in late winter had a limited impact on prices as the market had already concluded that elevated storage inventories would be sufficient to last the season.

“In November, a cold shot can quickly lower the anticipated seasonal storage trajectory, whereas the market has to more seriously consider the notion of running low on gas supplies in late winter,” EBW said.

With the warmer changes in the latest weather data, the November Nymex futures contract slipped back below $3.00 on Friday. The prompt month settled 3.6 cents lower at $2.971.

Meanwhile, the extent of likely production increases early next month is subject to a wide range of uncertainty, according to EBW. EQT Corp. said Thursday all its previously curtailed volumes have been returned to sales. The Appalachian pure-play, and the Lower 48’s largest natural gas producer, curtailed about 400 MMcf/d beginning Sept. 1, cutting 15 Bcf from third quarter production volumes. All volumes have since ramped back up.

If the market anticipates further increases from Cabot Oil & Gas Corp. and CNX Resources Corp. that don’t materialize, prices could rise, EBW said. “In our view, it seems that 0.5 Bcf/d has already come back online in recent days, leaving only 1.0 Bcf/d to ramp higher in early November.”

After trading in negative territory in recent week, Permian Basin cash prices enjoyed quite the jump this week. Although spot prices remained under $1.00, the bounce spilled over into forward markets.

There may be some downside risk ahead for forward prices. El Paso Natural Gas (EPNG) issued a force majeure Wednesday impacting key takeaway throughput meters in the Permian Basin. The outage essentially bottlenecks up to 300 MMcf/d of Permian production for an indeterminate amount of time.

The restriction dragged Permian pricing down in a big way Thursday, with key hubs plunging around 80.0 cents on the day. And although the force majeure was lifted by Friday, cash prices continued to tumble, averaging nearly $1 below zero.

Maintenance also wreaked havoc in the Pacific Northwest. After starting off the week near $3.00, cash prices at Northwest Sumas shot above $5 by Wednesday. Basis finished the day at the third-highest mark of 2020, and only the fourth time this year that it had rallied to more than $2.00, NGI data showed.

Genscape said maintenance on both Westcoast Transmission and Northwest Pipeline (NWPL), together with colder weather and surging demand, has driven the rally. Flow issues on the upstream Westcoast pipeline in British Columbia translated to a drop of around 200 MMcf/d in imports at the Sumas border. Westcoast encountered unexpected compression issues on its T-South system that required a decrease in flow capacity through Station 4B, effective starting with Wednesday’s evening cycle and lasting through at least Friday’s gas day, Genscape analyst Joseph Bernardi said.

Maintenance on NWPL also played a role in the Sumas price rally. The pipe has finished highly restrictive work that cut east-to-west flows to zero through the Goldendale area. Bernardi said a “less-restrictive” event in the same area is still cutting flows at the Roosevelt Compressor upstream of Goldendale, and this work is scheduled to last through Nov. 2.

“It limits Roosevelt’s capacity to 388 MMcf/d, which is roughly 140 MMcf/d below the average flows during the second half of October in the last two years,” Bernardi said.

Meanwhile, Pacific Northwest demand has climbed to six-month highs, driven by cold weather. NWPL’s demand for Idaho, Oregon and Washington crossed the 1,500 MMcf/d threshold in Thursday’s initial cycles for the first time since April 13, according to Genscape. The firm’s weather team was forecasting colder-than-normal weather for the region for the next week, with the coldest temperatures expected Sunday.Forward prices have also rallied. Northwest Sumas’ November contract jumped 39.0 cents from Oct. 15-21 to reach $5.151, Forward Look data showed. December climbed 28.0 cents to $5.741, and the full winter package rose 26.0 cents to $4.970. Smaller gains of less than 10.0 cents were seen for next summer and winter.