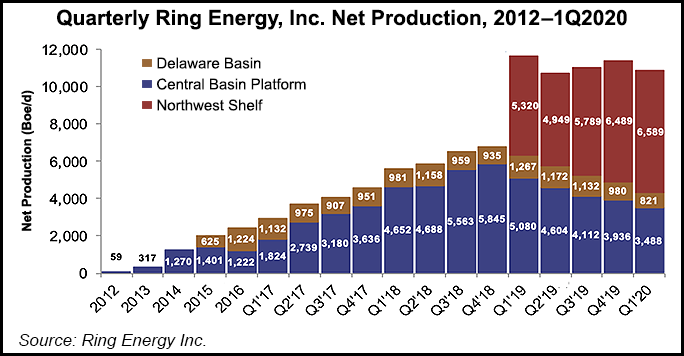 In an update late Wednesday, the Midland, TX-based independent said it began flowing oil again in early June when commodity prices were improving and price differentials were decreasing. By the end of June, output had returned to near April levels.

“In the absence of any new drilling and the shutting in and curtailment of essentially all the company’s production, our six month 2020 estimated production was less than 4% below 2019 six month production,” he said.

“Assuming no additional drilling or curtailments in 2020, we estimate our 2020 annual production to decrease approximately 20% compared to 2019.”

While output was curtailed, Ring upgraded some field operations to improve costs and efficiencies. Four conversions were made to rod pumps from electrical submersible pumps (ESP), upgrading two in the Northwest Shelf and two in the Central Basin Platform. Through the first half of the year, 13 rod pumps replaced ESPs.

“As we move forward with our rod conversion program, we continue to be encouraged by the lowering of our failure rates and overall expenses,” CFO Danny Wilson said. “Overall run times across the fields have increased dramatically. In addition, the lower costs to work on the rod pumped wells is leading to greatly reduced capital needs.”
Ring, which reacted early in March to the beginning impacts to demand from Covid-19, has set capital expenditures (capex) for 2020 at $25-27 million. Last year’s capex was set at about $154 million.

Ring’s spring redetermination of the senior credit facility recently was completed to determine borrowing power, and it was reduced to $375 million from $425 million, Hoffman noted.

To help prop up the bottom line, a planned sale of a portion of the Permian Delaware in West Texas, announced in April for $31.5 million, is set to be completed in early August.

“We remain cautious but optimistic that the company can restart its drilling and development program in early 2021,” Hoffman said. “If improved commodity pricing continues through the second half of 2020, and we realize a sustainable received price/boe in the low to mid $40’s, we could drill 18-20 new horizontal wells in 2021, all drilled and completed within existing cash flow.”