Ring Energy Inc., which is working on its first horizontal drilling program in the Permian Basin’s Central Basin Platform (CBP), is continuing to “aggressively look for and acquire additional acreage” after doubling down in the play, CEO Kelly Hoffman said Thursday. 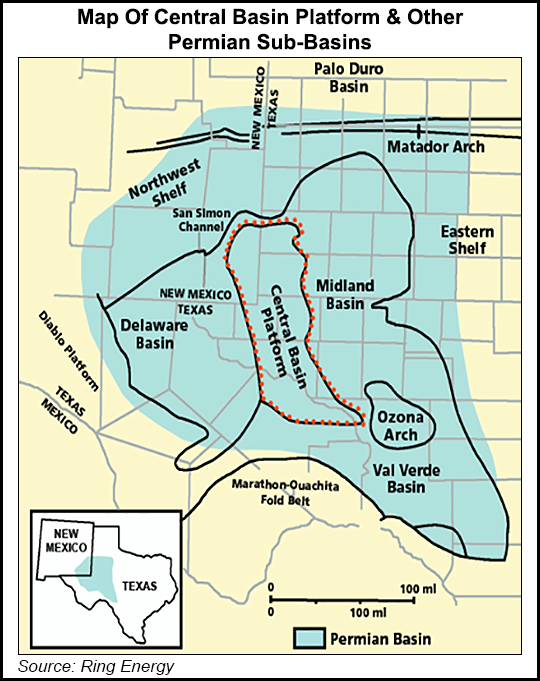 The Midland, TX-based independent, a longtime vertical driller in the CBP, said it has doubled its net acreage position in the CBP to about 16,500 acres. No financial details were disclosed.

“During our second quarter conference call we stated the possibility of dramatically increasing our footprint in the CBP based on prospects we had identified and/or were in discussions with,” Hoffman said.

“The result…is we have doubled our net acreage within our horizontal development area, which conservatively represents an additional 137 potential gross horizontal drilling locations.”

Staff “continues to aggressively look for and acquire additional acreage, as it is important for us to expand this area, which we believe offers tremendous upside opportunities.”

Ring also is looking for prospects to complement its existing Permian assets in the Delaware sub-basin after striking a $75 million deal last year (see Shale Daily, May 26, 2015).

During the quarterly conference call in August, Ring President David Fowler said the company had “not only seen the number of acquisition opportunities expand, but we’re pleased to see a good number of those that are in our backyard. Since the downturn and crisis, we saw only really a limited number of deals. But of those limited number of deals, the majority of those were outside our area of interest.

“And I’d simply say, we’ve seen probably more quality deals in the last two-plus months than we’ve seen in the last year-and-a-half, and are hopeful that one or more will lead to something meaningful.”

The Permian has been a hotbed of activity for buyers and sellers of late, which NGI reviewed in the special report Permian: ”The Mother Lode’ — Texas Play Heats Up as Industry Looks to Get Back to Work.

In a preliminary update of the first horizontal program in the San Andres formation of the CBP, Ring drilled three wells, two that were about 1.5 miles long and the third drilled 1.25 miles. Production casing has been set in all three, with the completion process scheduled to begin before the end of the month.

According to the National Energy Technology Laboratory, about 6 billion bbl of oil have been produced to date from the San Andres zone, with 2.15 billion bbl from the CBP’s San Andres. The play is a mixture of limestone and dolomite, with average well depths to date of around 4,800 feet, zone thickness of 200 feet and porosity of 8-16%.

Hoffman said during the August conference call that Ring also was refracturing some existing wells in the CBP. It also is upgrading infrastructure in the CBP to support the San Andres program.

Ring, which also has operations in Kansas, produced an estimated 194,590 boe in the second quarter, a nearly 7% increase year/year. Average output was 2,138 boe/d net.