Permian Basin explorer Ring Energy Inc. reported results exceeding expectations in the San Andres field of the Permian Basin during the third quarter as it drilled into recently acquired assets. 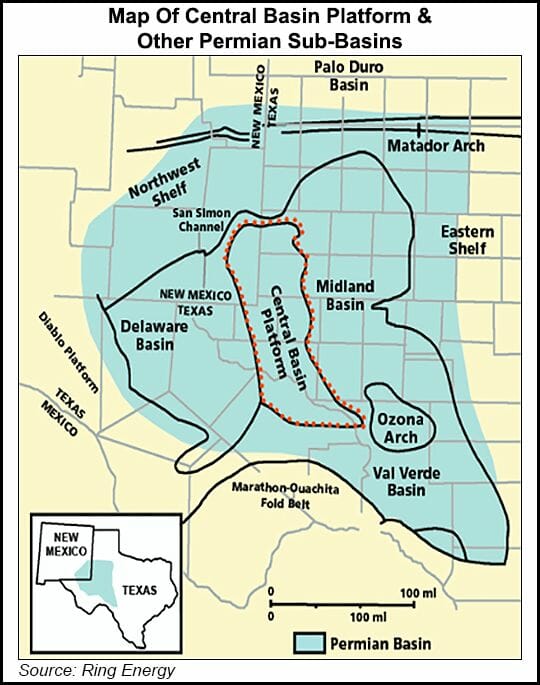 Early this year Ring paid $300 million to Wishbone Energy Partners LLC to acquire a substantial leasehold in the Permian’s third major formation, the Central Basin Platform (CBP), as well as the Northwest Shelf (NWS), which doubled proved reserves and production.

“This is the first full quarter of drilling and development on our newly acquired NWS property,” CEO Kelly Hoffman said. “Since moving a drilling rig onto the property in mid-April, we have focused on rebuilding our inventory of new wells. The current results reflect that effort.”

The Midland, TX-based independent drilled six one-mile horizontal wells in the San Andres field and completed three. In addition, testing on eight additional wells was completed, five in the CBP and three in the NWS, with average initial production (IP) rates of 475 boe/d and average laterals of 4,741 feet.

The results “exceeded expectations” in the quarter, COO Danny Wilson said. “Although the NWS wells tend to take a little longer to reach peak rates, we continue to be encouraged by the higher IP rates and flatter declines” versus legacy Central Basin Platform (CBP) wells.

“We continue to communicate with other operators in the area, sharing information and ideas in an effort to constantly refine our completion and production techniques with the ultimate goal of lowering costs and improving recoveries.”

After working the NWS assets for the past six months, “we firmly believe the horizontal San Andres play on the NWS yields superior returns and has the potential to get even better.”
The better results have led management to update decline curves and expect improved economics on its Permian assets.

Drilling costs in the NWS continue to be set at $2.4 million per well “even though there have been significant cost reductions,” management said. Ring is using the completion cost reductions to increase the size of fracture jobs to more than 800 pounds/feet from 600 pounds.

In the CBP, the oil IP remains at 305 b/d, while the gas IP rate was increased to 95 Mcf from 74. Drilling costs have decreased to $1.9 million from $2.2 million because of lower service costs. During 3Q2019, Ring received an average realized oil price of $53.09/bbl and 98 cents/Mcf for its natural gas.

The company also performed nine conversions from electrical submersible pumps (ESP) to rod pumps to reduce future operating expenses because of lower electric use. The conversions, said management, eliminate monthly rental costs on ESPs and future pulling costs by as much as 80%.