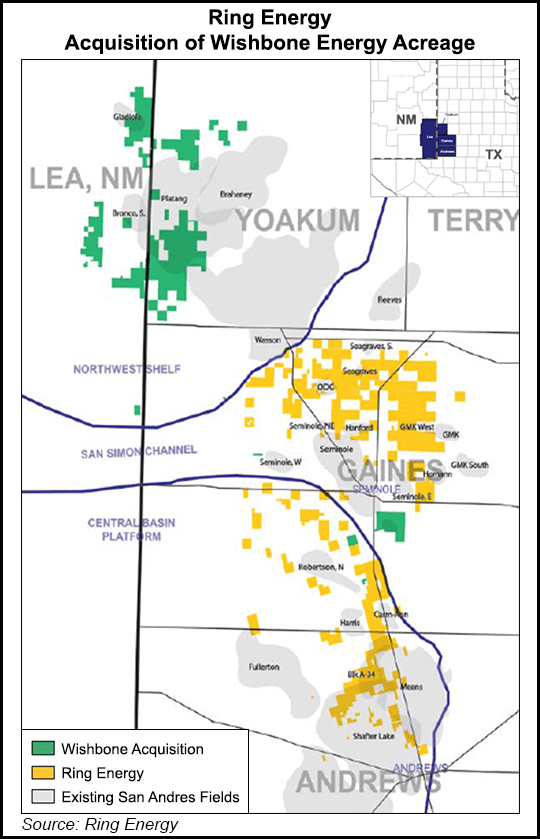 In an operations update Monday, the Midland, TX-based independent reported net production of 569,130 boe up 12.3% from the year-ago quarter. It deployed one rig in 1Q2019.

All six CBP wells drilled in 1Q2019 targeted the San Andres formation. Five were drilled with one-mile laterals and one was a 1.5-mile lateral. During the quarter, Ring drilled a single horizontal well with a one-mile lateral targeting the Brushy Canyon formation in the Delaware sub-basin. The company also said it drilled four saltwater disposal wells.

The average estimated price received for production in the first quarter was $47.40/boe.

“In our opinion, this transaction is a ‘game changer,'” Hoffman said, noting it doubled estimated production and proved reserves.

COO Danny Wilson said company was in the process of laying a saltwater disposal (SWD) line in northern Gaines County, TX, to connect two wells completed last year, which should “allow us to do more testing and development at a much lower cost due to a reduction in our SWD costs from approximately $2/bbl to less than 20 cents/bbl.”

“We are in the process of finalizing our capital expenditure budget for 2019 and will release it shortly,” Hoffman said. The 1Q2019 earnings call has not been scheduled.