Ring Energy Inc., whose exploration focus is trained on the Permian Basin’s Central Basin Platform (CBP) and beyond in West Texas, said net production in the first quarter climbed 90.6% year/year and increased 20% sequentially to 507,000 boe. 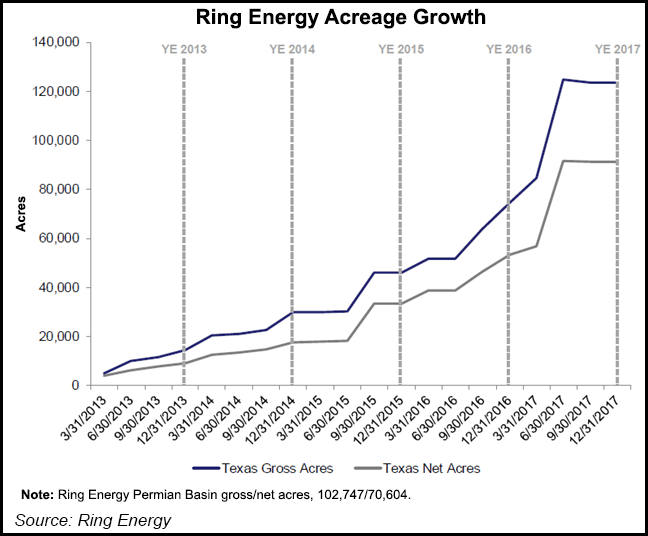 “The momentum of 2017 has continued into 2018,” said CEO Kelly Hoffman. “We are on track to drill 60 new horizontal wells this year, and with results exceeding all of our expectations, that growth looks to continue for years to come.”

Ring also has completed a natural gas gathering pipeline and is beginning to sell its associated gas, “instead of flaring it, which will significantly increase our gas sales going forward,” he said.

“We have also started to re-stimulate some of our older horizontal wells that have gone through their normal production decline and have seen great results. This is very cost effective, and we have seen daily production increases of over 50% in some wells.”

During 1Q2018, the Midland, TX-based independent drilled 12 horizontal wells in the San Andres trend in the Central Basin Platform (CBP) of the Permian, along with one horizontal Brushy Canyon well in the Delaware sub-basin.

In addition, Ring drilled three saltwater disposal wells during the quarter and was in the process of drilling two additional horizontal San Andres wells at the end of the quarter. Of the 13 drilled wells, 12 were about one-mile long and one was about a half-mile long.

“The first horizontal well on the North Gaines property has been drilled, and management is determining the most optimum completion technique,” Hoffman said of the CBP leasehold. “Results have been encouraging, and we are in the process of evaluating the best technique to maximize our returns.”