The U.S. rig count as of Friday had fallen by double digits for the second week in a row, with the week’s losses focused in Oklahoma and Texas, according to data from Baker Hughes, a GE Company (BHGE). 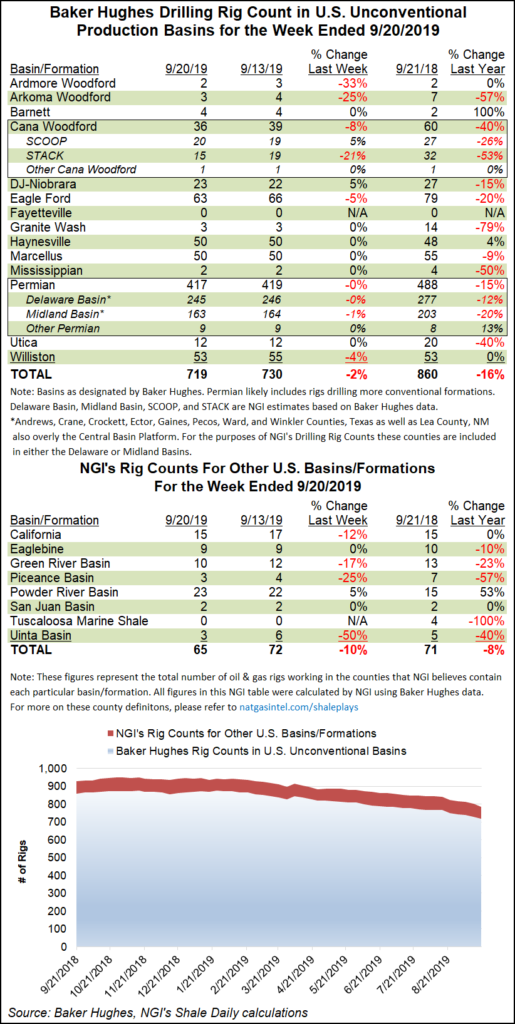 Eighteen rigs in total exited the U.S. patch for the week ended Sept. 20, including 14 oil-directed rigs and five natural gas-directed, partially offset by the addition of one miscellaneous rig. That dropped the combined U.S. count to 868 as of Friday, down from 1,053 a year ago.

The total number of active domestic rigs has undergone a precipitous decline in recent weeks, with 67 rigs exiting the patch since mid-August. The recent fall-off represents an acceleration of a downward trajectory that extends to late 2018.

The most recent week’s declines occurred primarily on land, where 18 rigs packed up shop. Two offshore rigs exited, while one was added in inland waters. Declines included 20 horizontal rigs and two vertical rigs, partially offset by the addition of four directional units.

In Canada, 15 rigs in total exited for the week, including 11 oil-directed and four gas-directed. That left the Canadian count at 119, down from 197 a year ago. The combined North American rig count fell to 987, down from 1,250 at this time last year, according to BHGE.

Among major plays, the Eagle Ford Shale and Cana Woodford saw the largest net declines for the week, each dropping three rigs from their respective totals. As of Friday, 36 rigs were operating in the Cana Woodford, down sharply from 60 a year ago. The Eagle Ford ended the week with 63 rigs, down from 79 a year ago.

Also among plays, the Permian and Williston basins each saw two rigs exit, while the Ardmore Woodford and Arkoma Woodford each dropped one. The Denver Julesburg-Niobrara added one rig for the week.

Among states, Oklahoma dropped 10 rigs from its total during the week, falling to 66 active units, less than half of the 136 units active in the year-ago period. Texas dropped seven rigs for the week, while three rigs departed in Utah.

Also among states, two rigs each departed in California and North Dakota, while one each exited in Louisiana and Wyoming. Alaska and New Mexico each added one rig for the week.

While the rig count continues to fall in the U.S. onshore, production is expected to continue climbing, at least in the near-term.

The Energy Information Administration (EIA) said earlier in the week it expects production from the nation’s most prolific onshore unconventional plays to continue a longstanding upward trend in October. Natural gas output is expected to reach 82.36 Bcf/d and oil 8.84 million b/d.

EIA has been reporting consecutive month-to-month increases out of the seven plays since January 2017, when their total gas production was estimated at 47.51 Bcf/d, and total oil production was an estimated 4.54 million b/d.

If the latest forecast holds true, total gas production next month from the seven plays — the Anadarko, Appalachian and Permian basins, and the Bakken, Eagle Ford, Haynesville and Niobrara formations — would be up 0.6% compared with 81.89 Bcf/d this month, EIA said in its latest Drilling Productivity Report.