The North American rig count stabilized further on Friday when Baker Hughes Inc. (BHI) reported a net change of zero in the United States and the departure of one rig from Canadian activity. 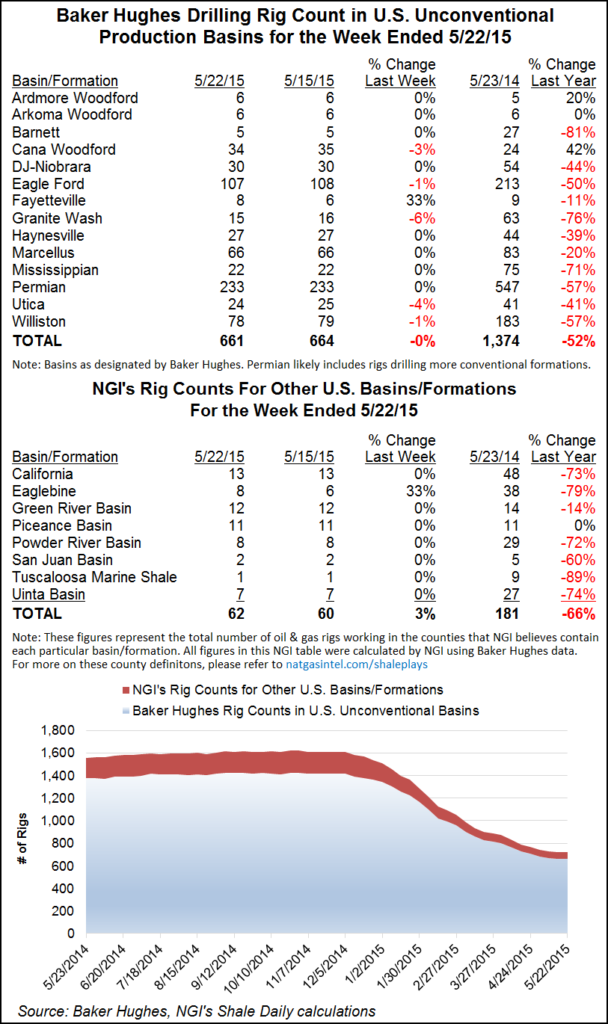 For the week ending May 27, one rig departed U.S. land activity, bringing that count to 374. That departing rig was offset by the return of one to inland waters where six rigs were left running. There were 24 rigs active in the U.S. offshore, the same as the previous week.

In Canada, two oil-directed rigs left while one gas rig returned, leaving the Canadian tally at 14 oil, 28 gas and one miscellaneous.

The weekly count came in more stable than it has been in recent memory. BHI weekly reports of late have been hinting at a calming in the oil/gas patch, as have analysts (see Shale Daily, May 20).

Jefferies analyst Brad Handler and colleagues said in a Wednesday note that “…the pace of decline has slackened and the E&P tone does not suggest (much) further weakening (in fact, some Permian operators talked of adding rigs in 2H16).”

The Permian Basin ended the week at 137 active rigs, the same as the previous week, after gaining three units in the tally for the week ending May 20.

“The Northeast continues to be forecast as the only U.S. region showing year/year production growth in 2016,” Barclays analyst Nicholas Potter said in a Wednesday note. “Our forecasts point to Northeast production growing 2.7 Bcf/d year/year. However, growth in the region is increasingly dependent on its backlog of drilled but uncompleted wells. The gas rig count in the region has fallen from 106 rigs at the start of 2014 to just 36 rigs during the first week of May.”

For the week ending May 27, the Marcellus Shale had 26 active rigs, the same as the previous week; and the Utica Shale had gained one rig for a total of 11 active, according to BHI.

Texas preliminary production data for March reported to the Railroad Commission of Texas (RRC) showed output of 77.7 million bbl of crude oil and 638.4 Bcf of total gas from oil and gas wells. These preliminary figures will be updated as late and corrected production reports are received. Production reported to the RRC for the same time period last year was 71.6 million bbl of crude oil, which was later updated to a current figure of 94.7 million bbl; and 614. Bcf of total gas, which was updated to a current figure of 750.7 Bcf.

In the last 12 months, total Texas reported production was 1.024 billion bbl of crude oil and 8.4 Tcf of total gas. Crude oil production is limited to oil produced from oil leases and does not include condensate, which is reported separately.