Continued growth in oil-directed drilling, including gains in the Permian and Williston basins, helped lift the U.S. rig count seven units higher to 439 for the week ended Friday (April 16), according to the latest figures published by Baker Hughes Co. (BKR). 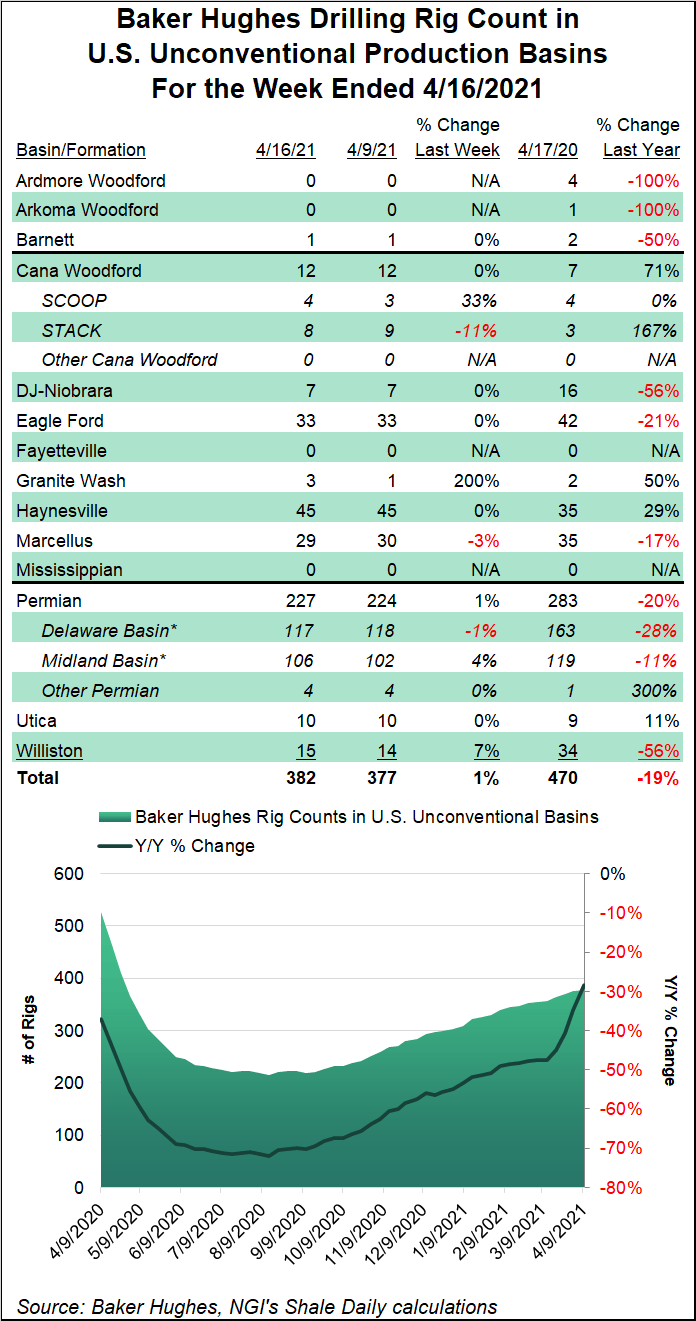 An increase of seven oil-directed rigs and one natural gas-directed rig offset the departure of one miscellaneous unit in the United States for the week. The combined 439 rigs active as of Friday compares with 529 rigs in the year-ago period, according to the BKR numbers, which are based partly on data from Enverus.

Land drilling increased by five units in the United States during the week, along with one rig in the Gulf of Mexico and one in inland waters. Horizontal rigs increased by four, with two directional rigs and one vertical rig also joining the domestic patch.

The Canadian rig count dropped two units — both oil-directed — to fall to 56 for the week, up from 30 in the year-ago period.

Among plays, the Permian saw the largest weekly gain, picking up three rigs to up its total to 227, down from 283 in the year-ago period. The Granite Wash added two rigs for the week, while the Williston added one. The Marcellus Shale saw a net decline of one rig for the period.

Texas operators applied for more oil and gas drilling permits during March than a year earlier, with the Permian still the go-to place for activity, the Railroad Commission of Texas (RRC) said recently. The RRC said it issued 798 original drilling permits last month, versus 744 in March 2020.

This comes as the Organization of the Petroleum Exporting Countries during the week formally raised its expectations for global oil demand in 2021, citing expectations for a recovery from the pandemic and stronger economic growth.

In its Monthly Oil Market Report, the cartel projected demand would rise by 5.95 million b/d this year, a nearly 7% increase from 2020. The estimate is up 70,000 b/d from the group’s earlier outlook in March.