Rockies Express Pipeline LLC (REX) on Tuesday sought to tamp down concerns raised recently by the Denver-based Public Service Company of Colorado (PSCo) that a proposal to expand the Cheyenne Hub will raise PSCo’s costs for purchasing gas there. 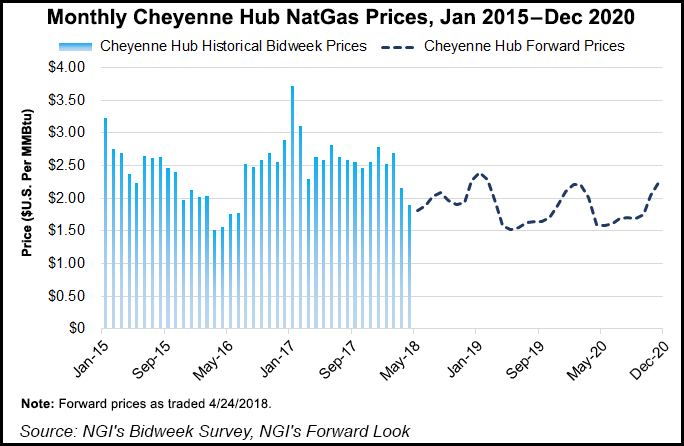 In a filing with FERC, REX, an affiliate of Leawood, KS-based Tallgrass Energy Partners LP, asked the Commission to reject the limited protest PSCo filed earlier this month, arguing that the proposed Cheyenne Hub Enhancement project, if anything, will push down prices at the Weld County, CO, hub.

In March, Tallgrass affiliates filed with the Federal Energy Regulatory Commission seeking certificates for the Cheyenne Hub Enhancement and the related Cheyenne Connector Pipeline after holding an open season last year. Together the projects would enable REX to tap additional volumes of natural gas from the Denver-Julesburg Basin for transport west-to-east.

The Cheyenne Connector proposes building a 70-mile, 36 inch-diameter pipeline that would deliver gas into REX’s Cheyenne Hub, allowing access to markets in the Midwest, Midcontinent and Gulf Coast. The Cheyenne Hub Enhancement would increase capacity at REX’s existing facility by around 1,000,000 Dth/d by adding 32,100 hp of compression via six booster units.

The projects each have 10-year commitments totaling 600,000 Dth/d from affiliates of Anadarko Petroleum Corp. and DCP Midstream LP.

PSCo had told FERC that it “does not generally oppose” the Cheyenne Hub project but said it “appears to impose higher costs on the gas that PSCo purchases from producers for delivery from” REX at the Cheyenne Hub, “without any demonstration that the project will provide any benefits or incremental capability to that purchasing ability.”

In its filing with FERC Tuesday, REX said PSCo is not a shipper on REX and that its concern about commodity prices falls outside of FERC’s purview.

“Any suggestion that FERC take action simply to influence PSCo’s commodity purchase price would be inappropriate and beyond FERC’s authority,” REX said. “The access to additional supplies will put downward pressure on natural gas prices, benefitting not only PSCo, but also the market overall.”

REX also pushed back on PSCo’s suggestion that it had not provided enough detail in proposed tariff language and service agreements. The pipeline argued that “contrary to PSCo’s claims, Rockies Express’s proposal to list the points subject to the new services on its interactive website is entirely consistent with Commission precedent and policy.”

Tallgrass is seeking FERC authorization for the Cheyenne Connector and the Cheyenne Hub Enhancement by February 2019 in order to place the projects in service by October 2019.