Three months since it was put into service, the 800 MMcf/d east-to-west Zone 3 capacity enhancement of the Rockies Express Pipeline (REX) has effectively erased a noticeable advantage Marcellus Shale pricing had enjoyed compared with the neighboring Utica Shale, an analysis of NGIprices shows. 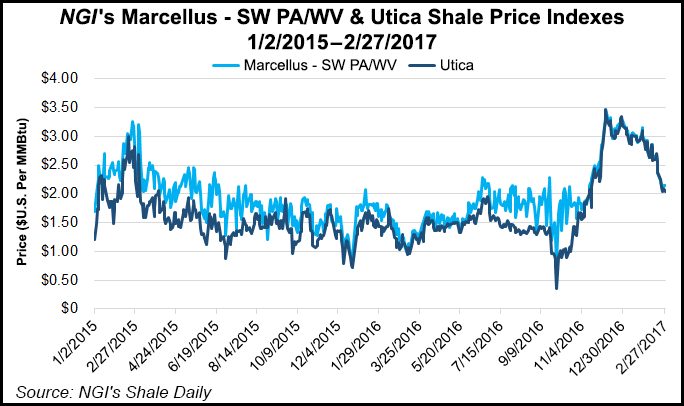 By the time the REX Zone 3 enhancement went fully into service, the differential between the two indexes all but evaporated, with the Utica mostly trading even or within a dime of the Marcellus. As recently as Feb. 21, the Utica traded a penny higher than the Marcellus at $2.25/MMBtu.

“The change occurred around the beginning of December 2016, which is in line with when REX began to make its first capacity additions on Section 390 of Zone 3,” NGI Markets Analyst Nate Harrison said, pointing to flow data available at the time on NGI’s daily REX Zone 3 Tracker.

“Not only did the premium of the southwestern Marcellus to the Utica disappear, but both points rallied higher, presumably due to better access to markets for the produced gas,” Harrison added. “While winter may have played a small role in this rally, it should be noted that both southwestern Marcellus and Utica gas have been trading visibly higher than they had since at least 2015, and the 2016-2017 winter was all but a no-show weather-wise.”

According to Harrison, the shrinking differential between the Southwest Marcellus and the Utica means well costs are likely to play a greater role relative to market access in influencing producer activity moving forward.

“The rally from the new takeaway capacity also appeared to increase the price correlation between the gas produced in these two geographically similar locations, as both appear to be enjoying similarly improved market access,” Harrison said.

Fourth quarter earnings calls have offered a glimpse into recent well economics differences between the Marcellus and Utica and how producers are prioritizing their capital.

Antero Resources Corp., one of the largest Appalachian players, said it will be ready to fill up the 800 MMcf/d it has committed to on Rover when the pipeline goes into service, scheduled for later this year. As executives outlined a strategy for taking advantage of improved natural gas liquids pricing, management of the Denver-based exploration and production (E&P) company said currently the best economics are in the liquids-rich Marcellus acreage compared to the dry gas Utica.

In an investor presentation, Antero said it costs $7.8 million to drill a 9,000 foot lateral in its highly-rich gas area of the Marcellus, with estimated ultimate recovery (EUR) of 22.1 Bcfe (24% weighted to liquids) yielding a pre-tax rate of return (ROR) of 57% based on Dec. 31, 2016, strip pricing.

Rice Energy Corp. also recently provided investors with a snapshot of the comparative economics between its Utica and Marcellus acreage.

While REX’s Zone 3 enhancement had an almost immediate impact on regional pricing, the production response to the new capacity has differed from previous expansions in the Northeast, revealing the diminished role of drilled but uncompleted wells in pacing Appalachian output, BTU Analytics Senior Analyst Matt Hoza told Shale Daily.

The new capacity on the Zone 3 enhancement filled up almost immediately, but “because that backlog wasn’t there to turn on wells really fast, we didn’t see that new incremental production come online. It’s not to say that we don’t expect 800 MMcf/d of incremental production because of REX, but because the backlog has been exhausted, it takes time now to really get that production up.

“We saw producers shift their volumes from, say, delivering into Dominion South to moving it westward. And those volumes that were shifted, we haven’t seen more come on to backfill that.”

As a point of comparison, Hoza noted the overall production response to Tennessee Gas Pipeline Co.’s Northeast Upgrade Project and Marcellus Pooling Point Project from late 2013, when incremental Appalachian production went up to match the new available capacity within days.

“When REX’s expansion came online in December, we had pretty strong Dom South pricing, so if I was a producer and I had $2.50/MMBtu Dom South, that’s a go-ahead to start producing, but we didn’t see that pop, that incremental production come online,” Hoza said.

For years pipeline capacity has predicted production increases in the constrained Appalachian Basin, but Hoza said the timing is likely to be different moving forward after a period of “lackluster” drilling activity and backlog drawdown.

“It really points toward drilling activity being increasingly important,” Hoza said of the potential producer reaction to upcoming expansions, such as the 3.25 Bcf/d Rover Pipeline Project.

“We build in a six- to nine-month lag in spud to sales time. It’ll come down to each producer and their risk tolerance. With all this backlash against infrastructure that we’ve been seeing, it’s easy for a producer to want to wait until a lot of that risk is mitigated and you can say with a pretty high confidence level that the project’s going to come online,” he said. “You don’t want something like with [the Dakota Access Pipeline], where it’s 99% done and then gets held up for months.

According to Hoza, the production response to new Appalachian takeaway projects hitting the market may follow a pattern similar to REX. There may be some more pipe-on-pipe competition as producers take time to ramp up to fill new capacity, he said.

“We’re going to get there…We believe we’re going to get to that point where we do have incremental production associated with these new projects coming online, it’s just going to be a slower process because of the backlog situation and really a focus on drilling activity and spud-to-sales time,” he said.