Rex Energy Corp. plans to put a newly contracted rig to work at the beginning of next year in its Moraine East area in Butler County, PA, which it received in a $120 million deal last month with Royal Dutch Shell plc affiliate SWEPI LP (see Shale Daily, Aug. 13). 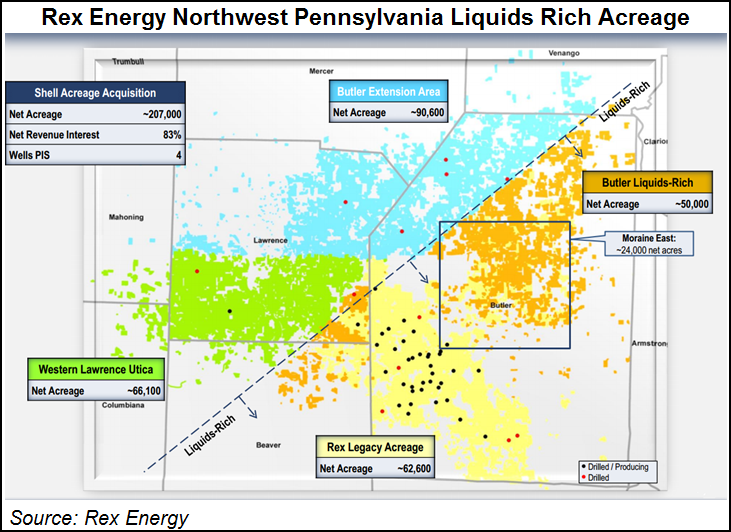 The company said last week it had closed on the 207,000 net acre acquisition that gave it new land in eight counties in Pennsylvania and northeast Ohio. The Moraine East area includes 24,000 net acres in the northeast block of its core Butler Operated area, which has led to steady production gains in recent months (see Shale Daily, July 29; March 28; Jan. 16). The new rig will join two others currently drilling the company’s legacy acreage in Butler County.

Meanwhile, Rex’s six-well Grunder pad in its Warrior North Prospect of Carroll County, OH, was recently placed into sales. The company said last month that it had completed drilling there and expected to turn the wells into sales sometime in the third quarter.

The wells were drilled with an average lateral length of 4,800 feet and completed with 24 horizontal hydraulic fracturing (frack) stages. The company reported an average five-day sales rate, on restricted choke, of 1.2 million boe/d, or 2.1 MMcf/d of natural gas; 454 b/d of condensate and 433 b/d of natural gas liquids (NGL).

The Grunder pad is a significant one for Rex as it is the latest to test reduced downspacing in Ohio. Last year, the company said it would begin downspacing tests there and in its Butler Operated area as part of a broader effort to reduce costs and maximize its available drilling locations.

The Grunder wells tested 500 and 600 foot downspacing. During its second quarter conference call, Rex said its six-well Baillie Trust pad in the Butler area, which tested a similar technique, had been performing consistently for eight months with no communication, or interference, between laterals (see Shale Daily, Aug. 7).

The company’s three-well Jenkins pad, also located in the Warrior North, tested wet as well. Rex said the three wells, drilled with an average lateral length of 5,350 feet and completed with 33 frack stages, were recently placed into sales on restricted choke. They tested at an average five-day sales rate of 1.6 million boe/d, or 2.7 MMcf/d of natural gas; 609 b/d of condensate and 563 b/d of NGLs.

CEO Tom Stabley said the condensate and NGLs coming from the pads demonstrate the long-term value of the Utica Shale.

With additional field compression online that was previously lacking and cutting into production in the company’s Butler Operated area, and a processing expansion under way at MarkWest Energy Partners LP’s Keystone complex (see Shale Daily, Aug. 26), Rex said that third quarter production is expected to be at the high end of its previously announced quarterly guidance of 159-165 MMcfe/d.