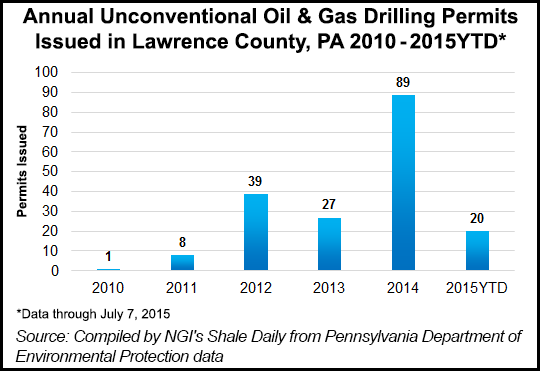 Rex said it would drill the well’s lateral to 7,000 feet in western Lawrence County, near the state’s border with Ohio in an underdeveloped area where few well results have been publicly released. Rex has several permits in the county, where privately held Hilcorp Energy Co. has been most active.

The company plans to drill and complete the well and place it into sales in the fourth quarter. Gathering and processing infrastructure for the region is already in place, with 50 MMcf/d of firm transportation available. CEO Tom Stabley said the company has 200 drilling locations in the county.

It has since been focused on a bolt-on from that acquisition in Butler County north of its legacy acreage, the Moraine East. Last month, two of four wells on its first pad tested at initial production (IP) rates over 24 hours of 8.2 MMcfe/d and 6.6 MMcfe/d, respectively (see Shale Daily, June 11). On Wednesday, the company said the other two wells produced at average IP rates of 9.3 MMcfe/d.

Those results, Rex said, were in line with the performance of wells in core acreage further south, where it recently placed the two-well Harvey pad into sales at an average IP rate of 9.8 MMcfe/d. A 400 MMcf/d gas gathering system for the Moraine East under construction is expected to be complete later this year (see Shale Daily, June 4).