Rex Energy Corp. said Monday it would begin moving half of its natural gas production in Western Pennsylvania to premium markets on the Gulf Coast and in the Midwest in November. 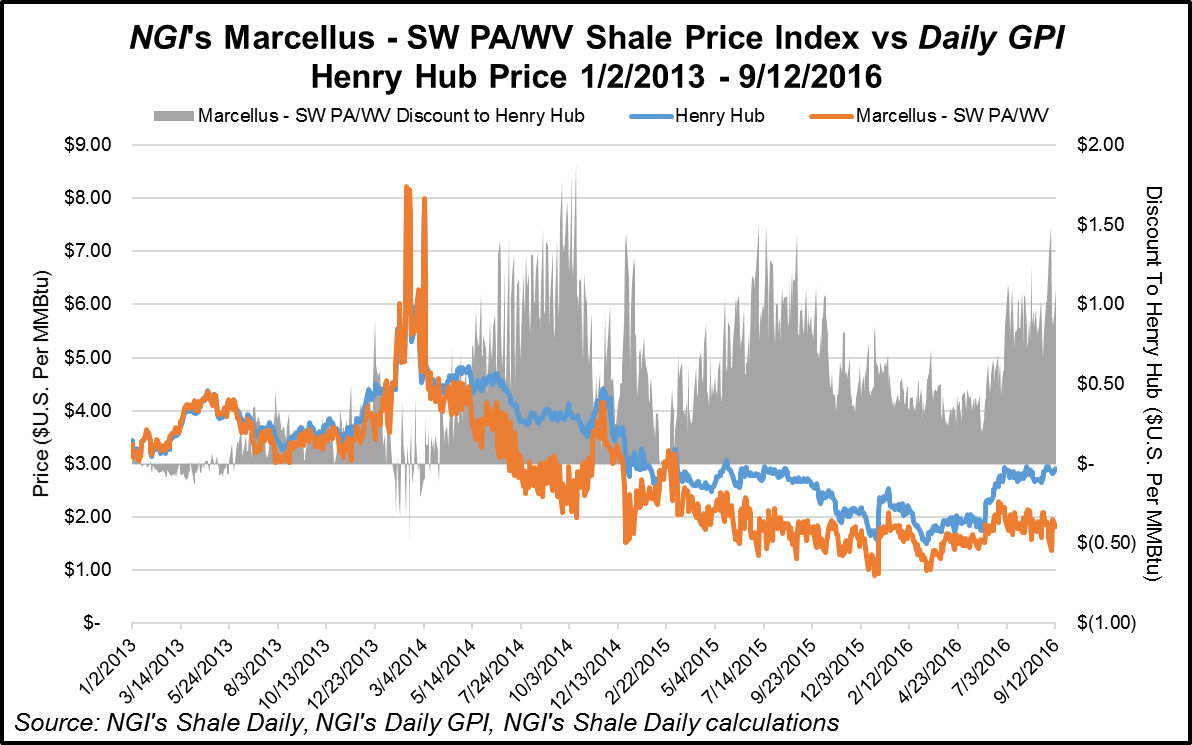 The company plans to move 130 MMBtu/d on Dominion Transmission Inc.’s Lebanon West II pipeline, which expands service from the MarkWest Liberty Bluestone Interconnection in Butler County, PA, to the Lebanon-Texas Gas Interconnection with Texas Gas Transmission Corp. in Warren County, OH (see Daily GPI, Nov. 23, 2015). Rex said it would move 100,000 MMBtu/d to the Gulf Coast and another 30,000 MMBtu to the Midwest before all of its capacity to the Gulf Coast becomes available in April 2017. The firm transportation would allow it to send 50% of its natural gas volumes to the new markets, while the remainder would be sold locally, where its basis has been hedged.

The company also said Stonehenge Energy Resources II LP has commissioned a high pressure gathering system in its Moraine East area of northern Butler County, allowing it to decrease high field pressures there and bringing operational efficiencies closer in line with its legacy Butler operated area to the south. The company said in August it had delays in starting up the high pressure system during the second quarter and said it could take until October to get it running (seeShale Daily, Aug. 4). The reduction in pressures allows for more consistent flow rates and an improvement in liquids recovery, Rex said.

Rex has primarily focused on the Moraine East this year, where it’s been drilling to hold by production the acreage it acquired from a Royal Dutch Shell plc affiliate in 2014 (see Shale Daily, Aug. 13, 2014) Investment firm Benefit Street Partners LLC (BSP), which is one of the company’s joint venture (JV) partners in Ohio and Pennsylvania, has elected to participate in the next four wells in the Warrior North area of Carroll County, OH, boosting its capital commitment to date from $98.1 million to $120.1 million. The company announced that JV earlier this year, which could ultimately net it up to $175 million (see Shale Daily, March 2).

BSP is to participate in the next four wells at the Vaughn pad. Rex said it is currently drilling the second well there and expects to place all of them into sales by December.

Also in the Warrior North, Rex brought online its three-well Goebeler pad and its two-well Perry pad during the second quarter. Both wells have produced more than 70% liquids, with the Goebler reporting a 30-day sales rate of 1,381 boe/d and the Perry reporting 1,197 boe/d over the same time period. Another four wells in the Moraine East at the Fleeger II pad are scheduled to be placed to sales during the first week of October.

Given the performance of the recent Warrior North wells and reduced downtime in the Moraine, Rex said it expects third quarter production to be at the high-end of its 190-195 MMcfe/d guidance for the period.