Rex Energy Corp. said it would look to raise more money with a joint venture (JV) or the sale of its legacy assets in the Illinois Basin, adding another element to a strategy geared toward offsetting leverage and bolstering liquidity as oil and gas prices remain depressed. 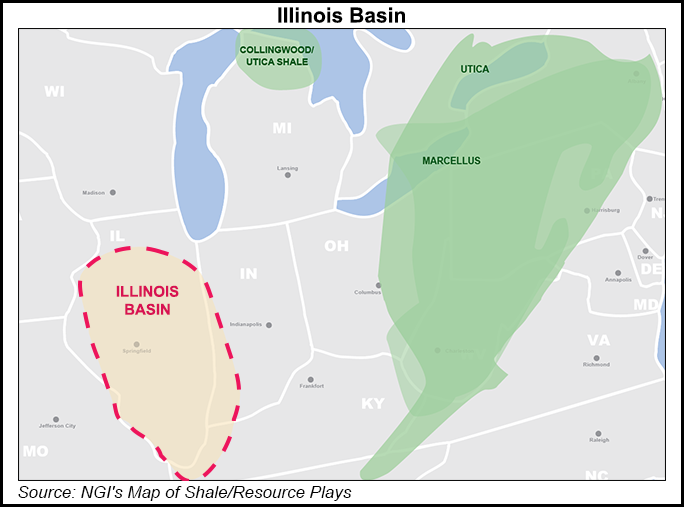 Rex said Monday that it has enlisted Evercore Group LLC to advise and help it pursue the monetization or JV of its 80,800 net acres in Illinois, Indiana and Kentucky. Earlier this year, Rex said it would monetize a 60% stake in its water distribution subsidiary Keystone Clearwater Solutions, search for a JV partner to help it develop core assets in the Marcellus Shale and sell non-operated acreage in Pennsylvania’s Westmoreland, Clearfield and Centre counties (see Shale Daily, Feb. 19).

The company has spent little in the Illinois Basin in recent years. Rex allocated 9% of this year’s $135-145 million operating budget to the region, where it produced 1,873 b/d of oil in the first quarter. Rex also took a $132.6 million write-down on those assets in the fourth quarter as a result of the steep drop in the price of oil.

The company said a sale would help improve its liquidity and increase flexibility in its 2015 and 2016 development plans. Last month, Rex announced a JV with ArcLight Capital Partners LLC to help fund development of its key assets in Pennsylvania’s Butler County (see Shale Daily, March 31). It also said Monday that the monetization of its water subsidiary “is on track” and expected to close by the end of the second quarter.

After announcing its JV with ArcLight, the company cut its 2015 capital budget by $60 million and also reduced this year’s production forecast from 196-205 MMcfe/d to 185-195 MMcfe/d. Rex produced 196 MMcfe/d last quarter, flat from 4Q2014 and an increase of 60% from the year-ago period. Oil and natural gas liquids accounted for 34% of first quarter production.