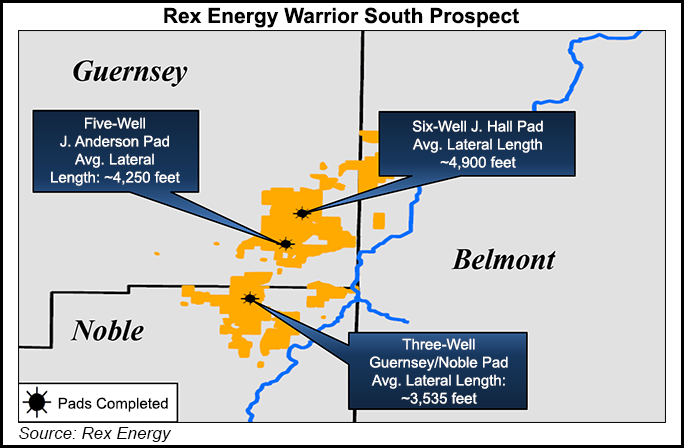 The company has been discussing selling the assets since 2015 in its ongoing search for more cash to bolster liquidity and keep rigs running. The sale to Antero includes 4,100 net acres in Guernsey, Noble and Belmont counties, where 14 gross wells were producing 9 MMcfe/d, or less than 5% of Rex’s overall production.

The sale leaves Rex with its Warrior North area in Carroll County, OH, nonoperated properties in Pennsylvania’s Westmoreland, Clearfield and Centre counties, and the Moraine East area in Western Pennsylvania, which sits to the north of the company’s core Butler operations.

“With limited opportunity to expand our development in Warrior South and high quality assets located in near proximity to Antero’s operations, we view this transaction as a win-win for both parties,” said CEO Tom Stabley.

While the transaction would seem nominal, Rex has been working to generate more cash since commodity prices began their downward spiral in mid-2014. The company remains highly leveraged, with analysts at Wells Fargo Securities estimating that its pro-forma liquidity remains at only $45 million after the sale and speculating that more restructuring is ahead.

Rex began divesting noncore assets in 2015, with the sale of its 60% stake in water distribution subsidiary Keystone Clearwater Solutions LLC for $66 million. More recently, the company sold its Illinois Basin assets in Illinois, Indiana and Kentucky, agreeing last year to divest 76,000 net acres to a land broker for $40 million. The company also has discussed selling its nonoperated properties in Westmoreland, Clearfield and Centre counties.

“This transaction is another in a series of initiatives we’ve undertaken in the last 12 months to strengthen our balance sheet and enhance Rex’s liquidity position,” Stabley said. “Once completed, the sale of the Warrior South assets, plus our previous sale of the Illinois Basin and other noncore assets, will have generated over $71 million of additional liquidity.”

The latest sale is expected to close by the end of March. Rex’s bank group has agreed to reaffirm the company’s $190 million borrowing base once the deal closes. Proceeds would be used to pay down debt and for general corporate purposes. It plans to soon update the market about its 2017 and 2018 development plans.

The company also has inked two joint ventures since 2015 with Benefit Street Partners LLC and ArcLight Capital Partners LLC to help fund its capital expenditures. Rex has focused for much of the last year on drilling to hold acreage in its Moraine East and Warrior North areas.

For Antero, the deal solidifies its consolidation efforts in the Appalachian Basin, where it remains one of the most active operators with six rigs running. The company had 629,000 net acres in Appalachia as of last month, and it has spent millions since last year to bolt-on acreage, picking up 66,500 net acres — not including its latest purchase from Rex.