Rex Energy Corp. on Tuesday released a two-year financial and operational plan, highlighting a clearer strategy to grow within cash flow as it looks beyond the squeeze it has faced during the downturn. 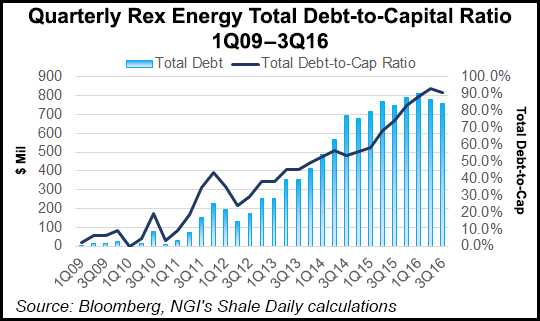 While analysts said the details are likely to be well received by investors, they also acknowledged that more balance sheet restructuring and asset sales will be necessary for the company to continue reducing debt. The plan is aimed at reducing leverage by 35-40% this year and 15-20% in 2018. Rex intends to increase earnings before interest, taxes, depreciation, depletion and amortization (EBITDAX) by 80-85% this year and by 10-15% the following year.

This year’s capital expenditures of $70-80 million would be funded through cash flow from operations and more asset sales. Most of the budget would be spent on the company’s Moraine East and Butler Operated areas in western Pennsylvania, with the rest allocated to the Warrior North area in Carroll County, OH. Rex plans to run one drilling rig in the Butler and Warrior North in 2017, when it expects to drill 21 gross wells, complete 26 and place 23 into sales, with most of those scheduled to come on in the second half.

Rex has focused for much of the last year on drilling to hold acreage in the Moraine and Warrior North areas. It said most of that work would be completed by the end of this year. The company is targeting 194-204 MMcfe/d of production in 2017, or 5-10% above 2016 guidance.

Capital expenditures in 2018 would range from $20 million to $40 million, with all of it dedicated to the Moraine and Butler Operated areas. The 2018 capital budget, Rex said, would be funded with cash flow from operations and cash on hand. The company plans to run one drilling rig in the Butler next year and drill four gross wells, complete six and place nine into sales. For the full year, Rex is targeting 223-233 MMcfe/d of production. Liquids would account for 38% of 2017 production and increase to 45% in 2018.

Rex will realize its first full year of Gulf Coast transport in 2017, where it will sell half of its natural gas volumes. That’s expected to improve natural gas differentials to 53-63 cents off the New York Mercantile Exchange and to 48-58 cents off Nymex in 2018.

Since the commodities downturn, Rex has been working on a series of financial initiatives to generate more cash, reduce debt and keep rigs running. It has thus far sold a water distribution subsidiary and noncore assets in the Illinois Basin and Southeast Ohio.

The company has also discussed selling its nonoperated properties in Westmoreland, Clearfield and Centre counties, PA. It had offered few details about last year’s drilling program and at times did not provide updates on its financial initiatives as it worked through the challenges of the downturn, which makes Tuesday’s release key in addressing investors concerned about its leverage.

The company has also inked two joint ventures since 2015 with Benefit Street Partners LLC (BSP) and ArcLight Capital Partners LLC to help fund its capital expenditures. Rex said BSP elected into another five wells this year for $15.8 million, bringing its total capital commitment to date to $135.9 million. BSP’s latest commitment, along with proceeds from the Southeast Ohio sale this month, provides Rex with $46 million of liquidity.