Rex Energy Corp. said late Tuesday that it has finally reached an agreement to sell its legacy assets in the Illinois Basin for $40 million to land broker Campbell Development Group LLC. 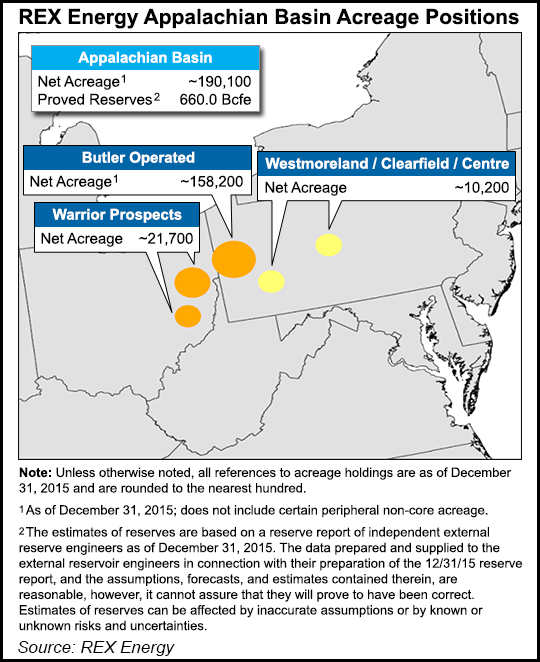 The company has been marketing the assets, located in Illinois, Indiana and Kentucky, since early last year as part of a broader initiative to boost liquidity, save more money and pay down the debt it has accumulated during the commodities downturn (see Shale Daily, April 20, 2015).

“The sale of the Illinois Basin assets is another important step for Rex Energy toward improving our liquidity position and providing greater capital efficiency as we continue with the development of our core Appalachian Basin assets, in particular our Moraine East area,” said CEO Tom Stabley.

Included in the deal, which is expected to close sometime in 3Q2016, are 76,000 net acres. The assets, Rex said, are currently producing 1,700 b/d of oil. The sale price does not include closing costs, but Rex said it could realize another $10 million in proceeds over the next three years depending on commodity prices. It didn’t provide other details on that aspect of the sale.

Rex is selling all of its interest in the basin, transitioning the company to an Appalachian pure-play with all of its assets now located in Ohio and Pennsylvania. The company acquired its Moraine East assets in a larger 2014 deal with an affiliate of Royal Dutch Shell plc for $120 million (see Shale Daily, Aug. 13, 2014). They are located in Western Pennsylvania’s Butler County, which lies to the north of Rex’s core legacy acreage there.

Proceeds from the Illinois Basin sale would be used to pay down the company’s revolving line of credit and for general corporate purposes. Rex has been short on cash as of late. Since the beginning of 2016, the company has received a delisting warning from Nasdaq, had its borrowing base reduced twice and seen its debt climb significantly (see Shale Daily, March 15).

It has also entered two joint ventures (JV) since last year to help fund its capital expenditures budget and keep rigs running in the Moraine to protect its acreage there with production (see Shale Daily, May 11).

Rex said in April 2015 that it would look to raise more money with a JV or the sale of its assets in the Illinois Basin. It’s also been marketing non-operated assets in Pennsylvania’s Westmoreland, Clearfield and Centre counties, and management has not ruled out a sale of its Warrior South prospect in Ohio’s Noble, Belmont and Guernsey counties (see Shale Daily, May 6, 2015).

That would still leave it with the Warrior North prospect in Ohio’s Carroll County. Earlier this year, the company exchanged some of its senior notes and swapped a portion of its preferred stock for common stock, saving about $75.4 million on interest and dividend payments.

Rex has largely neglected the Illinois Basin in recent years. In 2015, the company invested $13 million in conventional drilling, water flood enhancement and facility upgrades there, compared to the $171 million it spent in the Marcellus and Utica shales. In 1Q2016, Rex spent next to nothing in the basin, allocating about 3% of its budget for the period to those assets. It has also recorded impairments on the properties in recent quarters with the decline in oil prices.

As a result of the sale, Rex said it expects its borrowing base to remain unchanged at $190 million during the regularly scheduled redetermination that it’s currently undergoing.