Following its Chapter 11 reorganization last year, Houston-based Vanguard Natural Resources Inc. plans to cast off noncore assets and keep its focus on growth from the Piceance Basin in Colorado, the Pinedale Anticline in Wyoming and Arkoma in Oklahoma. 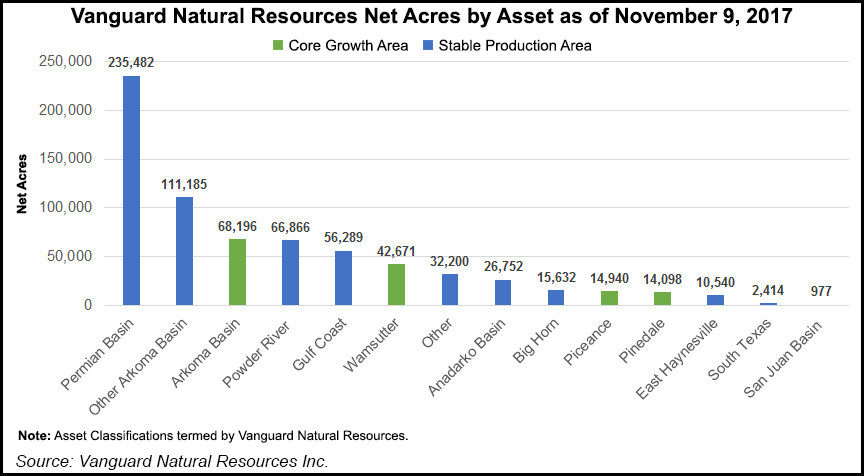 CEO R. Scott Sloan described the shift from an upstream master limited partnership to a more traditional exploration and production company as a “remarkable turn” for the company as it seeks organic growth and more financial discipline.

Sloan, a former BP plc senior executive who joined Vanguard as CFO last September, in January was named CEO, replacing Scott Smith. Vanguard plans to spend up to $160 million on capital spending this year, with more than 80% directed to the three basins.

It also will continue to shed noncore assets, as it did last year with the $38.5 million sale of Williston Basin assets.

“We are showing our commitment to organic growth as we look to efficiently develop these assets to maximize value for the company,” Sloan said.

Vanguard has budgeted $20-26 million this year for drilling and completing 14 natural gas wells in the Piceance south of Silt, CO, where it has nearly 15,000 net acres and 272 Bcfe reserves, two-thirds weighted to natural gas. Production in 3Q2017 was averaging 70 MMcfe/d.

In the Pinedale, Vanguard is working 14,000 net acres where it has an estimated 305 Bcfe in reserves, 87% natural gas, with production averaging 100 MMcfe/d. In the gassy Arkoma, the company will focus development on 68,196 acres, where reserves total about 111 Bcfe and recent production was 29 MMcfe/d.

Part of Vanguard’s strategy is to “simplify and refocus” its portfolio while cutting debt, said Sloan.

Vanguard also has hired Jefferies as lead adviser to explore “potential strategic alternatives,” which may include selling Wind River property in Colorado, more Williston acreage in North Dakota, as well as assets in eastern Montana and in Mississippi-Alabama, which collectively total about 75,000 net acres with 92 Bcfe in reserves.

In 4Q2017 production averaged 362 MMcfe/d, down 7% year/year. The company said production in late 2017 was impacted by curtailments in the Permian Basin and a temporary refinery shut down in the Big Horn Basin.