Although high pressure that started building across the country eased natural gas demand and prices on Tuesday, early signals for more cold weather later this month limited any significant declines. The Nymex May gas futures contract slipped 2.4 cents to settle at $2.684. June fell 2.7 cents to $2.722. 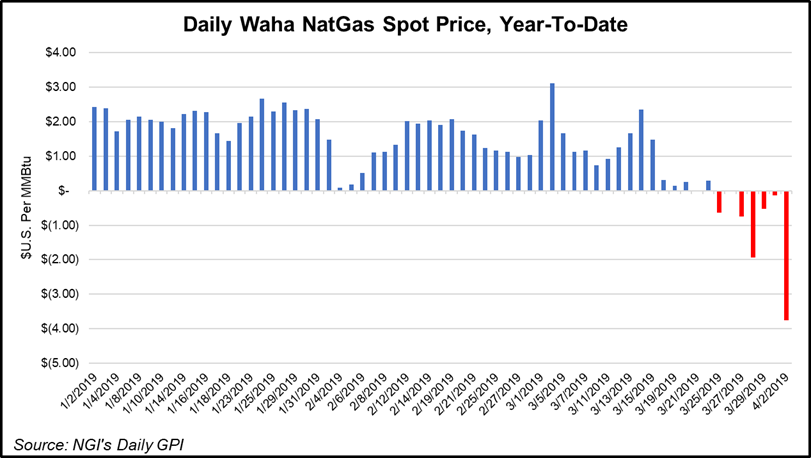 Spot gas prices were mixed as Tuesday started off chilly for the majority of the country ahead of the milder temperatures on tap for the remainder of the week. Led by a steep drop in the Permian Basin, the NGI Spot Gas National Avg. fell 18.5 cents to $2.205.

April traditionally has been finicky when it comes to weather, with late-season cold snaps often sweeping through the country before more sustained warmth moves in. The latest weather data confirmed that trend as overnight models showed mixed changes compared to Monday afternoon runs, with American data moving colder again and European ensembles holding relatively flat to the prior run, according to Bespoke Weather Services.

“All of the modeling continues to advertise a strong blocking regime setting up as we head into the middle third of April, keeping risks to the current forecast skewed to the colder side,” Bespoke chief meteorologist Brian Lovern said.

As of now, cold is not expected to be as extreme as the frigid air seen last April, as the cold air source in Canada is not as strong and some storm-induced variability was likely because of the El Nino-Southern Oscillation. Still, it could be enough to push demand up to above normal levels after the very warm six- to 10-day period, according to Bespoke.

“Similar to many of the cold shots we saw through the winter season, the coldest risks appear likely to be focused primarily in the middle of the nation stretching from the Rockies over toward the Midwest,” Lovern said.

Midday American data backed off the long-term cold a bit, but the possibility of chilly air returning could keep prices somewhat supported until more confirmation from weather models. Last year’s extension of cold, coupled with a hot summer, prevented storage inventories from fully recovering ahead of the winter and by December, inventories were more than 700 Bcf below historical levels. Interestingly, storage inventories peaked last November at the lowest level in more than a decade, according to EBW Analytics.

As they predicted last year, analysts expect robust production growth and looming mild weather to easily refill stocks, with some touting a surplus by the end of May. EBW said the next 30-45 days will mark the start of a sustained period of much higher-than-normal injections that could push the forward curve for the 2019 injection significantly lower.

“At current strip prices and if current weather forecasts validate, starting with the April 11 storage week, injections could average more than 100 Bcf/week over a 13-week period, potentially adding as much as 1.4 Tcf to storage versus 900 Bcf over the same period last year,” EBW CEO Andy Weissman said.

This string of mega-injections could create a huge year/year storage surplus and slash the deficit versus the five-year average to near zero, pushing end-of-season inventories far above acceptable levels and moving the forward curve down by 20-25 cents, according to EBW.

In the firm’s most likely scenario, storage is expected to peak near 3,500 Bcf in mid-November, suggesting the 2019 injection season is oversupplied at current Nymex futures prices by 1.0 Bcf/d.

Energy Aspects pegged gas stocks hitting 3.57 Tcf by the end of October, but that estimate is tied to no price-induced disruptions to U.S. liquefied natural gas (LNG) exports. Given the recent weakness in global LNG pricing, there is growing concern that European prices eventually will fall to levels that could begin to make U.S. exports uneconomic.

Even if the arbitrage closes, “U.S. balances do not suggest a tank top situation, as actual lost cargoes are likely to be limited, and we expect some of the gas not exported to be diverted to price-induced domestic coal-to-gas switching,” Energy Aspects analysts said. “Of course, that implies global price weakness bleeding into the U.S. market.”

After a brief rally on Monday, spot gas prices quickly reversed course as high pressure was expected to strengthen, sending temperatures to much milder levels for the remainder of the week. The milder setup was expected to curb demand, with the day/day losses most pronounced in the Permian Basin, where negative spot gas prices have become commonplace so far this spring.

Waha’s lowest trade on March 18 was in negative territory and its lowest trades have remained negative since then, according to NGI data. On Tuesday, prices fell further into the red as Waha next-day gas trades went as low as minus $6.60 on the way to averaging minus $3.75.

The history-making discounts have occurred as average monthly Permian production for March represented an all-time high, according to Genscape Inc. The same was true for each of the three previous months, back through and including December 2018.

Meanwhile, Transwestern Pipeline is conducting planned maintenance at Station 8 in central New Mexico, limiting operational capacity for total westbound flow by more than 250 MMcf/d. This limit is about 135 MMcf/d lower than the year-to-date average, according to Genscape.

Other pipelines across the country are also ratcheting up maintenance ahead of the summer. Transcontinental Gas Pipeline (aka Transco) on Monday limited capacity at its Scott Mountain interconnect with Gulf South Pipeline in Choctaw County, AL, to 750 MMcf/d. Flows averaged 1.03 Bcf/d and maxed at 1.27 Bcf/d for the two weeks prior to the event, Genscape said.

Receipts at Scott Mountain dropped to 512 MMcf/d for Tuesday, which is 238 MMcf/d below the maintenance operating capacity, and no significant reroutes have been seen at Transco’s other interconnects with Gulf South, according to the firm.

“As such, our Gulf South production sample has dropped to 2.91 Bcf/d for April from a two-week max of 3.42 Bcf/d, mostly from Louisiana gathering systems. Reroutes may still come into play, as this event will last until April 20,” Genscape analyst Josh Garcia said.

On the pricing front, the restrictions and production impact appeared to have little effect on spot gas, as prices along that portion of the Transco system fell just over a nickel. Further downstream, however, losses were more pronounced as Transco Zone 5 next-day gas tumbled nearly 15 cents to $2.655.

With increasingly milder weather on tap for the remainder of the week, two simultaneous unexpected outages that occurred Monday along the Texas Eastern Transmission (Tetco) system also had little impact on prices. First, capacity at the Heidlersburg, PA, compressor station (CS) was reduced by 130 MMcf/d to 1,720 MMcf/d. Flows for Tuesday were at 1,740 MMcf/d, which is the 14-day max and immediately constrains the Southern 36-inch diameter line, according to Genscape.

Next, capacity at the Armagh, PA, CS was reduced by around 240 MMcf/d to 2,674 MMcf/d. Flows through Armagh have averaged 1,900 MMcf/d and maxed at 2,550 MMcf/d over the last 14 days, meaning the Northern Penn-Jersey Line is not as constrained as the Southern 36-inch line, Genscape said.

“These outages occurred after Monday trading had closed” and therefore had no price impact, but warming weather limited bullish pressure on the cash market Tuesday, with Texas Eastern M-3, Delivery prices slipping about a dime to average $2.53.

Temperatures were expected to reach the 50s and 60s across the northern United States during the next few days, with daytime highs in the 70s late in the week and this weekend from Chicago to near New York City, according to NatGasWeather.

“Tetco has resolved their unplanned outages relatively quickly this past winter with the exception of the Berne explosion,” which is expected to return to service between Wednesday and Saturday (April 3-6), Garcia said.

In the Northeast, spot gas in New England continued to retreat at a faster pace than other regional pricing hubs. Tenn Zone 6 200L dropped 22 cents to around $2.80, while Transco Zone 6 non-NY fell 15 cents to $2.57.

Markets in the western half of the country moved against the pack, posting gains of as much as 65.5 cents on Transwestern San Juan, which averaged $1.955, and another notable increase along El Paso Natural Gas Pipeline.