A sea of red spread across U.S. natural gas markets during the Aug. 16-20 week as comfortable temperatures and heavy showers moved into the Northeast. With the Pacific Northwest also getting some relief from the unrelenting heat, NGI’s Weekly Spot Gas National Avg. plunged 21.0 cents to $3.810. 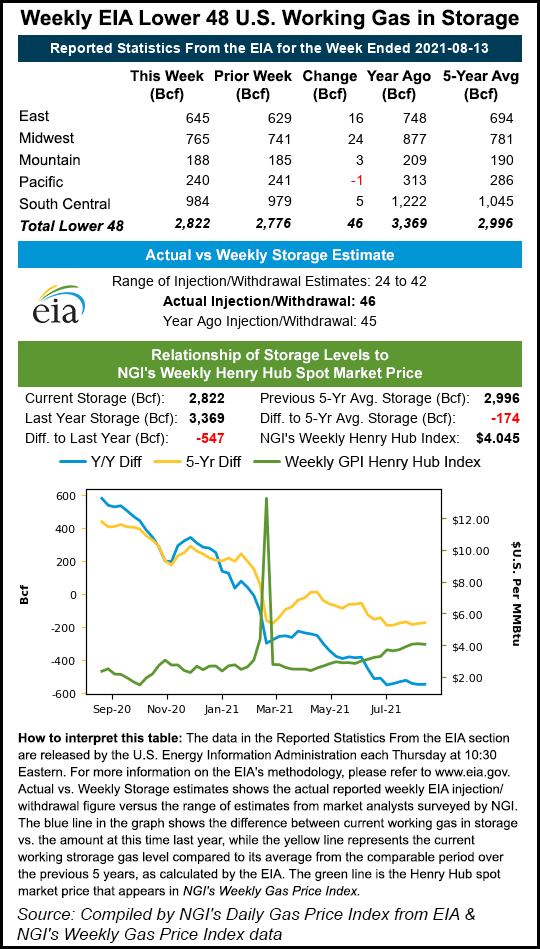 Futures prices, meanwhile, fluctuated quite a bit more. The Nymex strip whipsawed back and forth throughout the week as macro factors came into play and some fundamentals caught the market off guard.

At the same time, tropical activity ramped up this week, with Hurricane Grace making an initial landfall early Thursday near Tulum, Mexico. A second landfall was expected over the weekend along the Mexico coast.

Tropical Storm Henri was heading toward the Northeast. The storm was expected to strengthen to hurricane status ahead of landfall Sunday in southern New England. With heavy rains and cool temperatures ahead, Algonquin Citygate spot gas prices averaged 41.5 cents lower on the week at $3.870.

Waha plunged 27.5 cents to $3.555, following in line with points in California that earlier in the week had been impacted by an explosion on Kinder Morgan Inc.’s El Paso Natural Gas Pipeline. Two people died in the blast, and another was injured.

The blast occurred at around 5:45 a.m. MT Aug. 16 on Line 2000, near Coolidge, AZ. The pipeline remained shut down and the site secured as of Monday. An electronic bulletin board notice indicated the operational capacity through the Cimarron constraint of 567,300 Dth/d would be reduced to zero and remain in effect until further notice.

Though prices initially spiked after the blast, they came crashing down soon after. El Paso S. Mainline/N. Baja dropped 23.5 cents on the week to average $5.070. KRGT Del Pool plunged a far steeper $4.820.

Up, Down And All Around

Traders had a tough time this week pinning down a fair value for September gas, not to mention the rest of the near-term Nymex curve. Volatility was on full display amid a backdrop of competing fundamentals, including weak power burns, below-average storage, softening equity and oil markets and strengthening export demand.

When the dust settled at the close of Friday’s session, the September Nymex gas futures contract was down 9.5 cents from Monday at $3.851.

The weakness along the curve is not completely unexpected. Even with the forecast heat looming, the peak of summer is firmly in the rearview mirror. Soon enough, any lingering warmth is likely to give way to cooler temperatures that would put the kibosh on air conditioning demand.

What would likely be several weeks, or months, of moderate weather would bode well for storage inventories that have struggled to replenish enough gas ahead of the winter. The latest government storage report offered a glimmer of hope that as long as the stars align, injections could come in higher than expected.

The Energy Information Administration (EIA) said inventories as of Aug. 13 climbed by 42 Bcf, which is near historical levels but at the high end of wide-ranging expectations. The net increase in stocks was actually 4 Bcf higher because of a reclassification in the South Central region.

Elsewhere, the Midwest reported a 24 Bcf injection into inventories, and the East added 16 Bcf, EIA said. Mountain stocks rose by 3 Bcf, while the Pacific withdrew 1 Bcf.

Wood Mackenzie natural gas analyst Eric Fell said the reference period in the latest EIA report was the first loose week since the week ending Jun 10. It ended a streak of eight in a row of weather-adjusted tightness versus the five year average, which largely corresponded with nuclear/renewable generation coming in much lower than expected.

The latest injection, according to Fell, “is a warning to those who assumed that the tightness over the previous eight weeks was ‘structural’ and didn’t realize that unusually low renewable generation was a major driver (something we have pointed out repeatedly).”

Total working gas in storage reached 2,822 Bcf for the period, 547 Bcf below year-ago levels and 174 Bcf below the five-year average, according to EIA.

Mobius Risk Group said the Labor Day holiday is just around the corner and the typical season decline in cooling degree days is on deck. This means the market would need more “undeniably bullish indicators” over the next two weeks if a retest of $4.00 were to occur.

Just as cooler weather was starting to make it feel like fall (everywhere but Texas, at least), temperatures are set to crank back up again in the days ahead, driving spot gas prices higher on Friday.

NatGasWeather said moderately strong national demand was forecast for the weekend as most of the southern United States remains “very warm to hot.” As upper high pressure expands to rule most of the country in the next few days, though, the heat wave could expand to the important East region. Temperatures were expected to climb into the 80s and lower 90s, driving up gas demand for power generation.

The late-season hot weather may be short lived, according to NatGasWeather. The latest data continued to favor the hot upper ridge weakening Aug. 28-Sept. 3, although up to two days slower based on the European weather model.

Meanwhile, the Northeast on Friday also was monitoring Tropical Storm Henri. The storm was expected to strengthen to hurricane status by Saturday and be near that strength when it makes landfall in southern New England by late Sunday.

New York utility Consolidated Edison Inc. said Friday it was mobilizing extra crews to respond to any outages or other service problems that may occur as Henri moves through the area. The company secured 1,200 mutual aid workers to restore service to any customers that were affected by the storm. Those workers would supplement the utility’s crews.

On the pipeline front, Columbia Gulf embarked on another round of maintenance on the Shelburn and Alexandria compressor stations for the Louisiana Xpress Project (LAXP). The work would cut up to 365 MMcf/d of southbound flows until Sept. 3.

Elsewhere across the United States, Houston Ship Channel cash climbed 14.0 cents to average $3.890 for gas delivery through Monday. In the Midwest, Chicago Citygate spot gas picked up 12.0 cents to $3.770.