A relentless chase to capture and develop more land in the Permian Basin has led Resolute Energy Corp. to rethink keeping its legacy Aneth Field holdings in Utah’s Paradox Basin. 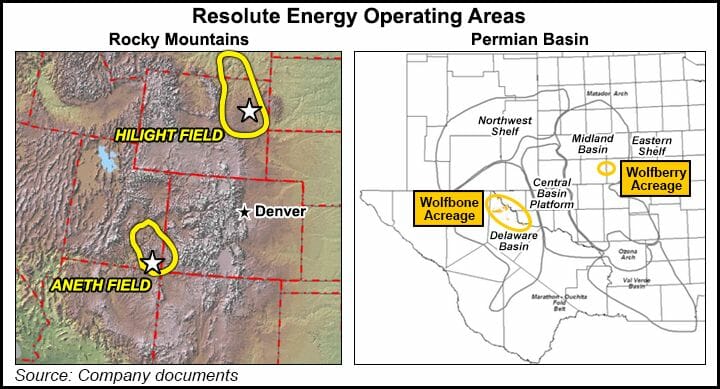 The independent is exploring sale of Aneth while it continues to extend its position in the Delaware sub-basin of West Texas. Earlier this month it paid $160 million to increase its holdings in Reeves County by 28%, adding 4,600 net acres in the Orla and Southwest Rim projects, adding to a string of acquisitions in the region.

“2016 was a transformational year for Resolute,” CEO Rick Betz said. “Today we are positioned as one of the premier Delaware Basin operators with a strong balance sheet and an operational footprint in one of the best areas in the basin.

“With the completion of our 14-well 2016 program, we exited the year producing 20,800 boe/d, more than double fourth quarter 2015 average production,” with lease operating expenses falling by 52%. Year-end Permian production was 14,500 boe/d, representing more than 70% total.

“Operationally, 2017 is off to a fast start for Resolute. Since the beginning of the year, with two rigs running in Reeves County, we have finished drilling operations on three wells, completed three wells, we have two wells waiting on completion and have three wells in various stages of drilling.”

To complete its repositioning as a pure-play Permian operator, the board has given a green light to dispose of the Aneth assets, Betz said.

A predecessor Resolute company and a partner in 2004 acquired assets in the Greater Aneth Field in southeastern Utah from a Chevron Corp. legacy company. The Paradox Basin, which straddles southeastern Utah and southwestern Colorado, traditionally has been a conventional producer; Aneth was discovered in 1956.

Last year a proposed master leasing plan by the Bureau of Land Management for southeastern Utah to balance development and conservation was criticized by industry, which said it would put a damper on oil and gas exploration.

The “primary focus” this year is to derisk the inventory in the Delaware, said the CEO. This would include evaluating downspacing in Wolfcamp as well as expanding activity to the Wolfcamp B.

In late February, Resolute brought on the Renegade wells, a second downspacing test in the Upper and Lower Wolfcamp A zone. It now is testing the Lower Wolfcamp A and the Wolfcamp B within the Mustang area.

“While we are not ready to announce plans and provide guidance for 2018, we currently expect to keep our existing two rigs, continue with a third rig on the newly acquired acreage, and potentially add a fourth rig to our legacy position,” Betz said. “These activities should continue our significant growth in production, cash flow and proved reserves.”