Denver-based Resolute Energy Corp. is increasing its position in West Texas after striking a $160 million deal to capture 4,600 net acres within the Permian Basin and adding 800 boe/d in output. 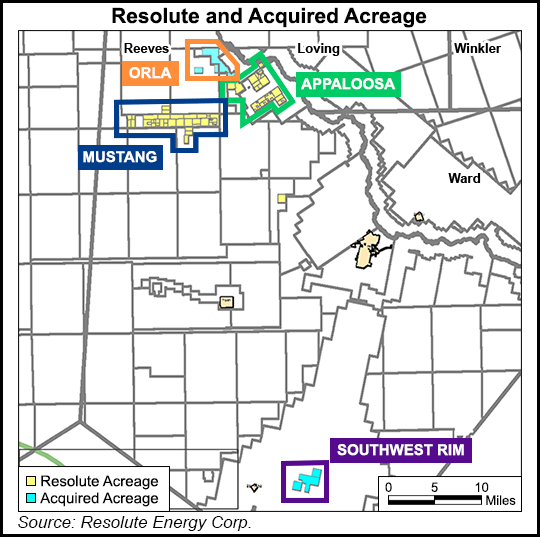 The agreement announced Friday with undisclosed private sellers would boost the explorer’s leasehold in Reeves County within the Delaware sub-basin by 28% to 21,000 net acres. The transaction, set to close in mid-May, also includes six drilled but uncompleted (DUC) laterals and one well now being drilled.

“This is exactly the kind of targeted, focused, consolidating opportunity that leverages the strengths of our team and our assets,” CEO Rick Betz, who took over Jan. 1, said.

Betz in December had hinted that additional acquisitions were in the works after Resolute paid Firewheel Energy LLC $135 million for about3,300 net acres in Reeves County.

“Upon closing, we will have approximately 21,000 net acres in Reeves County, where we have been drilling some of the most successful Wolfcamp wells in the Delaware Basin,” he said. “This part of the basin is one of the most exciting and economically attractive oil and gas plays in the U.S…As with our Firewheel acquisition in October 2016, this transaction allows us to add acreage, production and opportunity without either the uncertainty associated with acquiring acreage outside of Reeves County or adding significantly to our staffing and infrastructure needs.”

Once the DUCs are finished, development from the combined leasehold is set to accelerate, “with a third rig later this year,” materially adding to production beginning in the second half of 2017, Betz said.

The purchase includes 2,187 net acres adjacent to Resolute’s existing Orla project, and 2,405 net acres in its Southwest Rim project area. Nearly all (95%) of the acquired acreage would be operated by Resolute.

The Southwest Rim acreage being added is about five miles east of some successful Wolfcamp wells, along with Barnett and Woodford development in the nearby Alpine High in the Delaware that Apache Corp. has touted. The leasehold has an average 70% working interest with more than 2.5 years of primary term left on the leases.

Resolute plans to complete all of the DUCs sequentially once the acquisition is closed, with all of them online by mid-July. Two rigs now are running in the Delaware, and a third rig may be added later this year to accelerate the Orla development.

“After adjusting for flowing production as well as the six DUCs, per acre math comes out to $26,000/acre,” said Wells Fargo Securities LLC analyst David Tameron. “However, the real focus area of the acquisition is the Orla block, given that it is adjacent to the company’s existing Appaloosa position, where results have been very strong. Running the same per/acre math but assigning no value to the Southwest Rim area (conservative as it’s certainly worth something), we get to a value of $55,000/acre or approximately $2.2 million/net location.”

Given Resolute’s results to date in Appaloosa, acquiring adjacent acreage “makes sense,” Tameron said. “And while the price per acre and per location is high (again conservatively giving no credit to the Southwest Rim assets), we believe the acquisition is 5% accretive to net asset value, assuming results are similar to the company’s stated mid-length lateral type curve. Additionally, we believe the company’s intention to add a third rig to the Orla area will help bring value forward rapidly, while putting some incremental pressure on liquidity.”

“While this is a rather high price for acreage, we argue the fact that Resolute is adding high-value inventory to its asset base and so far the company has shown the ability to generate top-tier returns, even by Permian standards, in this region,” Wangler said.