With oil and natural gas production essentially flat in North Dakota’s Bakken Shale play, state officials have noted an uptick in drilling interest on the Fort Berthold Reservation while a statewide effort to reduce wellhead flared gas has hit a wall. 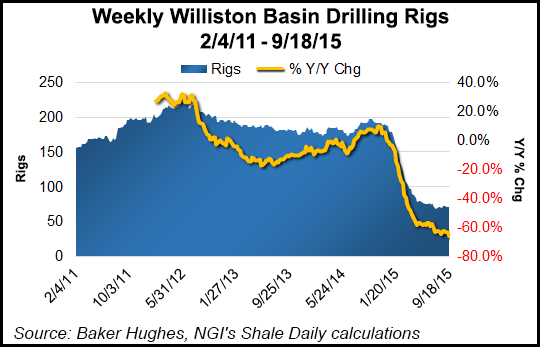 Lynn Helms, director of the state Department of Mineral Resources (DMR), urged the oil and gas industry last Monday to “hang in there, baby,” evoking a picture of a famous poster from the 1970s featuring a cat literally hanging on the end of a rope by a couple of outstretched paws.

Oil production was down by a fraction of 1% in July compared to June (1.201 million b/d vs. 1.211 million b/d), while natural gas was up slightly (1.657 Bcf/d vs. 1.651 Bcf/d), according to Helms, who noted the rig count on Monday dropped to 68, its lowest since it was 63 in November 2009. In the midst of this, the rig count on the Fort Berthold reservation lands increased by two, and gas capture to curb flaring dropped back to 81%, compared to 82% during the previous month in the Bakken.

“As you look at the fundamentals of the oil and gas industry, that ‘hanging in there’ seems to be what is happening…” Helms said. “Well numbers are up, but only slightly, and all that in the face of oil prices, permitting and rig counts that are down significantly.”

Calling the portion of the Bakken on Fort Berthold “some of the best geology in the play,” Helms said two rigs were added on the Native American lands. Production there increased for the most recently reported month by 11,000 b/d, compared to the rest of the state where production was down 10,000 b/d. “Drilling permits on all of the Fort Berthold lands were actually up over the past three months.”

Helms attributed the upward trend on Fort Berthold to the reservation’s tribal council putting aside plans for more regulation and taxation of oil and gas production. “This was encouraging to industry and caused operators to move back in,” he said.

“In addition, Fort Berthold happens to have some of the best geology in the play. About 10% of the state’s oil wells are on the reservation, but it accounts for 30% of the state’s production. These wells are just three times as good as in other places.”

On the flaring side, however, the state has lost ground, and there is more bad news likely coming, according to Helms. He oversees the statewide gas capture program aiming at 85% by Jan. 1 and 90-95% in the long term. “This is the beginning of the problems we are seeing from the delays in the Hess gas gathering/processing system through federal rights-of-way permitting delays that have put a lot of pressure on gas capture,” he said.

Gas capture percentages have been getting better, but volumes of flared gas have been steadily rising. This is because of the increased drilling concentration in the parts of the Bakken where the crude has high percentages of natural gas.

“Less gas flared [not percentages] is the goal,” Helms said. “We think it is due to the migration of drilling and completion activity into the high gas-concentration area.”

Helms said there is just a lot more flared gas coming into the system than was anticipated early last year.

Sufficient new gathering and processing infrastructure and interstate pipeline takeaway infrastructure is not going to come online in the next 18 months, according to Helms and Justin Kringstad, executive director of the North Dakota Pipeline Authority.