University of Houston (UH) research that was coordinated by the Environmental Defense Fund (EDF) has found some Barnett Shale natural gas wells, compressor stations and gas processing plants leak more methane than previously estimated, but many of the problems can be addressed through easy measures. 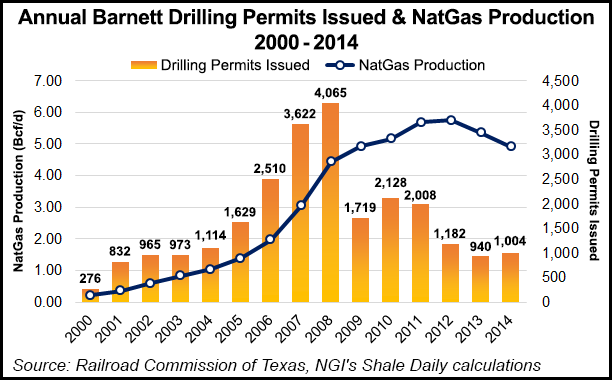 Some emissions can be attributed to human error, compounded by the fact that the sites are often left unattended for long periods of time, said Robert Talbot, UH professor of atmospheric chemistry. “A lot of them are a broken valve, or someone leaves a hatch open. It’s human error. And nobody goes back to the site for a month or so.”

The study is one of 11 papers published in the July 7 edition of Environmental Science & Technology, all looking at fugitive methane emissions in the Barnett Shale. The studies were coordinated by the EDF, with funding from the Alfred P. Sloane Foundation. All field measurements were conducted over 15 days in October 2013.

Natural gas burns more cleanly than other fossil fuels, producing more energy per carbon dioxide molecule than oil or coal, but methane is a potent greenhouse gas. The UH paper said methane has a global warming potential over a 100-year time frame as high as 34 times that of carbon dioxide.

Talbot authored the paper, along with Xin Lan and Azucena Torres, who were graduate students in his UH lab at the time, and former postdoctoral research associate Patrick Laine.

There are natural sources of methane, including wetlands and landfills. The UH researchers measured emissions from a dozen landfills, as well as testing from public roads next to natural gas well pads, compressor stations and processing plants. All testing was done with a mobile laboratory.

The emissions were measured and reported in several ways; the researchers also calculated measurements to gauge what percentage of the natural gas produced escaped through emissions.

A few individual sites had very high methane loss rates that would make natural gas from these sites worse for the climate than coal in the short term. That finding drives interest in determining the prevalence of high-emission sites.

Methane releases from compressor stations and processing plants were considerably higher than that at the well pads, the researchers found.

According to a recent EDF blog post on the 11 Barnett emissions papers, at any given time, roughly 75% of the methane emissions from production sites in the Barnett tend to come from “a set of elusive and dispersed sources. Higher emissions from these sites are often a result of avoidable operating conditions such as equipment leaks and tank venting that are relatively easy to prevent with frequent monitoring and repair practices.”

EDF said there are many cost-effective ways to find and fix high-emitting sources. The organization cited a 2014 report by ICF International that found that by adopting already available technologies and operating practices, industry could cut methane emissions by 40% over five years for just one penny per thousand cubic feet of produced gas.