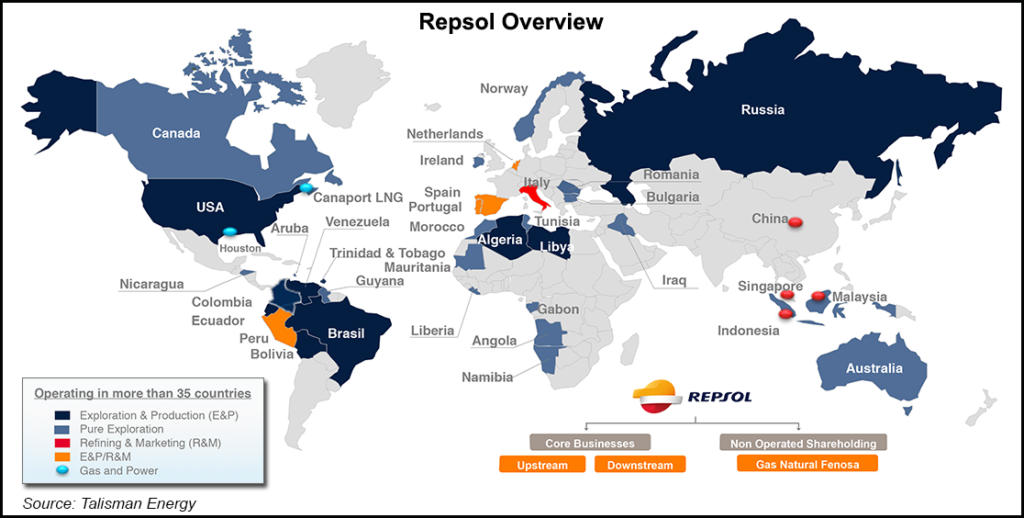 The all-cash price to be paid by Repsol, announced early Tuesday, would almost double the Madrid-based producer’s oil output and enhance its onshore and offshore exploration and production (E&P) opportunities. The financial details equate to about US$8.00/share, a 75% premium to a seven-day volume-weighted average share price of Talisman and a 52% premium to Monday’s closing price.

The news sent Talisman shares soaring, gaining more than 47% ($2.42) in heavy trading, with more than 270 million shares trading hands. Average volumes have been about 10.2 million shares a day.

“It was the right moment” for the transformational merger, Repsol Chairman Antonio Brufau said Tuesday during a news conference. “From the beginning, Talisman was in our sights.”

The transaction is “a good agreement at the right time,” Repsol CEO Josu Jon Imaz said. The integrated producer had begun courting Talisman last summer but walked away when the two could not agree upon a price. However, “depressed crude prices” have “particularly impacted financially stressed companies,” making the transaction a go this week, he said.

The combination, said Brusfau, “allows us to align our highly complementary portfolios of upstream assets to create a truly global company well-positioned to grow production and reserves. Talisman has strong operational capability, a highly skilled workforce and we look forward to leveraging their expertise as we partner to create a stronger, more profitable and competitive organization.”

The transaction, expected to be completed before mid-2015, would create one of the 15 largest privately owned oil and gas companies in the world, Repsol said. Production from the combined company would be more than 680,000 boe/d. The addition of Talisman would increase Repsol’s output by 76% and boost reserves by 55% to more than 2.3 billion boe.

Repsol also would gain 2,800 Talisman employees, giving it a workforce numbering close to 27,000 in 50-plus countries. Repsol has a market value that is five times larger than Talisman’s, but its E&P staff would nearly double with the merger. The companies had been flirting with a tie-up for months and negotiated the final details over the past few days (see Shale Daily, Dec. 15). Talisman’s largest shareholder, Icahn Enterprises, run by corporate raider Carl Icahn, had been pushing for changes at Talisman since buying stock in October 2013 (see Daily GPI, Oct. 9, 2013). Icahn’s holdings in Chesapeake Energy Corp. in 2012 also helped lead to management changes there.

Talisman Chairman Chuck Williamson said the merger would create “significant and immediate value” for stakeholders. “Importantly, the deal underscores Repsol’s strong belief in the high quality portfolio that Talisman has worked hard to develop. Repsol is a world-class operator with a solid track record and the financial capability to continue the development of these assets within their international portfolio. I am proud of the company that our employees, past and present, have built and I believe this transaction represents new opportunities for them in Canada and around the world.”

Talisman CEO Hal Kvisle, the former boss of TransCanada Corp., was planning to retire this year after coming aboard as an interim chief two years ago. Doing the merger now was an imperative because a new CEO might not have been as willing to deal. Kvisle explained that selling the company was almost a necessity.

Talisman failed to sell enough assets to service its debt, and the only alternative to a sale would have been to increase capital spending, an alternative that shareholders may have opposed.

“Talisman’s board firmly believes the transaction with Repsol maximizes value for Talisman shareholders relative to any alternative available to the company,” Kvisle said.

Repsol’s exposure to North America is a big get, with unconventional acreage in Texas, Appalachia and Alberta. Talisman mostly has been working its liquids prospects in the Eagle Ford Shale in South Texas. It also has gassy prospects across Pennsylvania’s Marcellus Shale, as well as in New York, which for now is off limits to unconventional drilling. A big lineup of prospects also are in Alberta’s conventional and unconventional fields. Talisman has offshore rigs not only in the North Sea, but also off the coasts of Indonesia and Malaysia — talent that is expected to be used to develop prospects in the Gulf of Mexico.

Talisman’s headquarters in Calgary are to remain open and be home to one of Repsol’s largest management offices. A special meeting of Talisman shareholders is scheduled for mid-February to vote on the transaction, already approved unanimously by both companies’ boards of directors. The transaction is to be completed under the Canada Business Corporations Act, which requires government and regulatory approval.

The agreement entitles Talisman “to consider and accept a superior proposal if Repsol does not match the superior proposal,” and if the arrangement is terminated, Repsol would be entitled to receive $270 million. Other suitors still may be in the picture, including the Canada Pension Plan Investment Board.

Another bid “is always possible but buyer pool for this diverse asset base likely limited in our view,” said Tudor, Pickering, Holt & Co. (TPH) analysts. “We believe past suitors have been attracted by high-quality Colombian/Asian assets with a decent portfolio of Marcellus and Eagle Ford holdings; however remainder of portfolio has kept many on the sidelines. If stock closed gap to the offer [Tuesday], we would hit the bid as this appears to be a full price in a tape littered with cheap assets.”