A “perfect storm” of oversupply, low prices and the Covid-19 pandemic has snarled billions of dollars worth of liquefied natural gas (LNG) projects, creating a bubble that could burst if the outlook doesn’t improve on multiple fronts, according to a report by Global Energy Monitor. 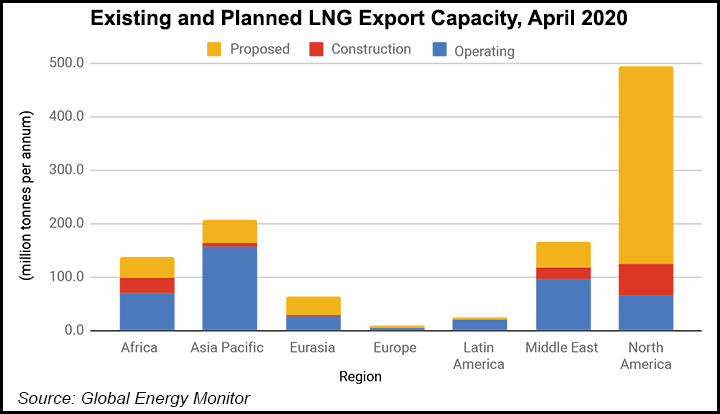 GEM said Monday that the landscape for LNG has drastically changed since its last overview of industry projects in 2019. A combination of overbuilding, low commodity prices, pandemic disruptions, increasing environmental opposition and growing political resistance to the super-chilled fuel have slowed the sector’s rapid ascendancy.

“LNG was once considered a safe bet for investors,” said GEM research analyst Greig Aitken. “Not only was it considered a climate-friendly fuel, but there was substantial governmental support to make sure that these mega-projects — including some of the largest capital sector projects ever built — were shepherded to completion with the billions they needed. Suddenly, the industry is beset with problems.”

Over the last year, the amount of LNG import and export terminal capacity under construction worldwide has more than doubled, with total capital expenditures rising from $82.8 billion to $196.1 billion, GEM said, noting that four of the five top export developing companies are based in the United States. They include Cheniere Energy Inc., NextDecade Corp., Venture Global LNG Inc. and Alaska Gasline Development Corp.

GEM’s report tallied at least two dozen global projects that have recently been cancelled or delayed due to a variety of factors, including difficulties acquiring financing, pandemic-related workforce issues, souring economics or effective protests. GEM said export terminals in earlier stages of development are even more vulnerable to the weaker global economy as the failure rate for such projects stands at 61% between 2014 and 2020.

While companies, particularly in the United States, have flocked to take advantage of cheap unconventional natural gas supplies and what were once premium prices in key import markets overseas, many were never expected to be built in such a competitive landscape. Despite the pandemic’s impact on securing supply agreements with offtakers and even financing for projects, LNG demand is still expected to grow in the years ahead, when the supply and demand balance is forecast to tighten.

“Currently, the LNG market is in a tough position, but that does not mean its future is any less bright,” a spokesperson for the Center for Liquefied Natural Gas (CLNG) told NGI. “Natural gas will be essential to a cleaner energy future helping to support renewables as a flexible baseload.”

The massive export terminals currently under development in North America and abroad require enormous amounts of capital and the world’s leading financiers haven’t stopped investing. GEM noted that the world’s 35 leading banks offered $22.4 billion in financing for the LNG industry last year, the highest level since 2016 when the same banks provided the sector with $21.9 million via project finance, general corporate finance and the underwriting of corporate bonds.

GEM warned, however, that the combination of massive capital at risk and deteriorating market conditions could lead to deep financial losses in the years ahead.

A weak market could also persist beyond the pandemic. GEM noted that increasingly efficient and cost-competitive renewable energy sources also raise questions of long-term financial viability and stranded asset risk if LNG terminals are underutilized long before their useful life of 30-40 years.

But CLNG noted that the role natural gas plays in supporting and furthering renewable energy deployment across the globe is not once mentioned in the report.

“In addition to helping reduce emissions through partnering with renewables, natural gas has helped drive down carbon emissions in the United States to decades long lows,” said the Washington, DC-based advocacy group. “As massive countries like India and China turn to natural gas to help achieve their climate goals, they are also reaping the benefits of lower” pollutants.

GEM, a network of researchers focused on fossil fuel and alternative energy projects, was founded under a different name in 2008 and later became part of the Earth Island Institute, which is focused on ecology and social justice projects. GEM ultimately became an independent nonprofit organization.