Sustained by low-cost shale gas resources, the North American natural gas industry has embarked on a period of sustained growth, but it will have to address the challenges of a rapidly evolving U.S. energy market for the economy to fully realize its benefits, according to a report issued Wednesday by Black & Veatch. 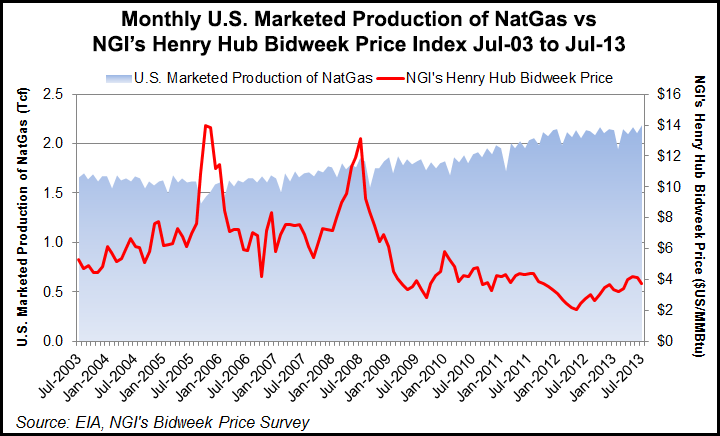 The report, based on a survey of natural gas industry leaders conducted in mid-July, found that 95% of the 336 respondents were “optimistic” or “very optimistic” in their general outlook toward future industry growth.

Coal-to-gas switching in the power sector, combined with growth in pipeline exports to Mexico, industrial operations and U.S. LNG exports, will total more than 20 Bcf/d in additional demand between now and 2020, a Goldman Sachs economist said earlier this month (see Daily GPI, Oct. 10). Credit Suisse analysts recently said they expect the same market forces could “conservatively add 12 Bcf/d to demand” by the end of the decade (see Daily GPI, Oct. 8).

Participants in the survey and Black & Veatch analysts largely agree that natural gas prices will rise to between $4.50 and $5.99/MMBtu by 2020, according to the report. But stakeholders will need to address challenges jointly if the industry and the economy are to get the most out of the nation’s natural gas resource.

“The report’s findings show that stakeholders across the value chain must work together and compromise on key issues,” said Peter Abt, managing director of Black & Veatch’s Oil & Gas strategy practice. “The general consensus is that more pipeline capacity is needed. How this capacity is financed — and who pays for it — is the area of disconnect. Without pipeline investment, the natural gas industry’s growth will slow and consumers could see dramatic price swings.”

Participants in the survey representing the upstream, midstream and downstream sectors all placed safety, economic growth and regulation among their top five industry issues. And, while 90% of large utilities said they have cyber security programs in place or in the planning stages, only 42% of small utilities — those with less than 100,000 customers — said they had a similar level of preparedness.