More than $17 billion of the personal fortune of Harold Hamm — the founder, majority owner and CEO of Continental Resources Inc. — could reportedly be up for grabs at his divorce trial. 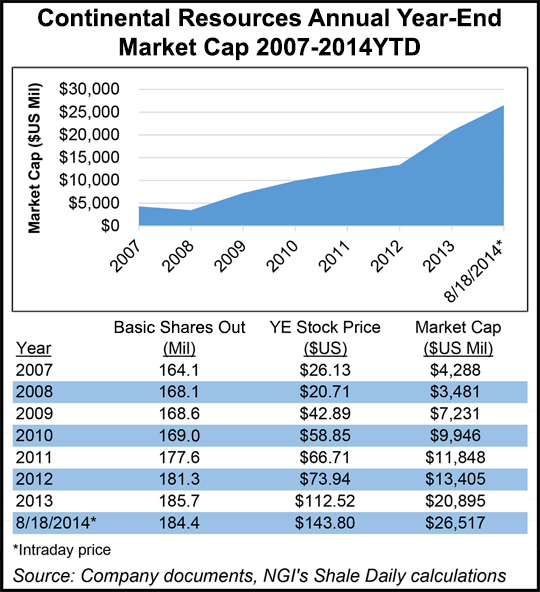 Reuters reported Friday that Kenneth Button, an economist and expert witness hired by Sue Ann Hamm, testified that up to $15 billion of Continental’s growth took place between the couple’s wedding in 1988 and February 2014. A 122-page report compiled by Button and marked as “confidential business information” has been entered into evidence at the trial.

According to Reuters, Oklahoma County Court Judge Howard Haralson released the report to the news agency after determining it wasn’t subject to his confidential order over the proceedings. Haralson barred the media and the public from hearing opening statements in the trial over concern confidential information could be disclosed and damage Continental (see Shale Daily, Aug. 7).

Button testified that Continental had grown another $4 billion since February, about $2.6 billion of which would belong to Harold Hamm, through his 68% stake in the company. Collectively, up to $17.6 billion could be subject to division between the two former spouses, Reuters said.

Forbes lists Harold Hamm, 68, as the 40th richest person in the world for 2014, with an estimated net worth of $18.2 billion. Sue Ann Hamm, who has held executive roles within the company, filed for divorce in 2012.

Last year, Harold Hamm, the son of poor Oklahoma sharecroppers, was profiled in a book, The Frackers: The Outrageous Inside Story of the New Billionaire Wildcatters, written by bestselling author Gregory Zuckerman (see Shale Daily, Nov. 7, 2013).