Worldwide production of shale oil has the potential to reach 14 million b/d by 2035, about 12% of the world’s total oil supply, prompting a 25-40% decline in oil prices, according to a report issued Thursday by PwC. 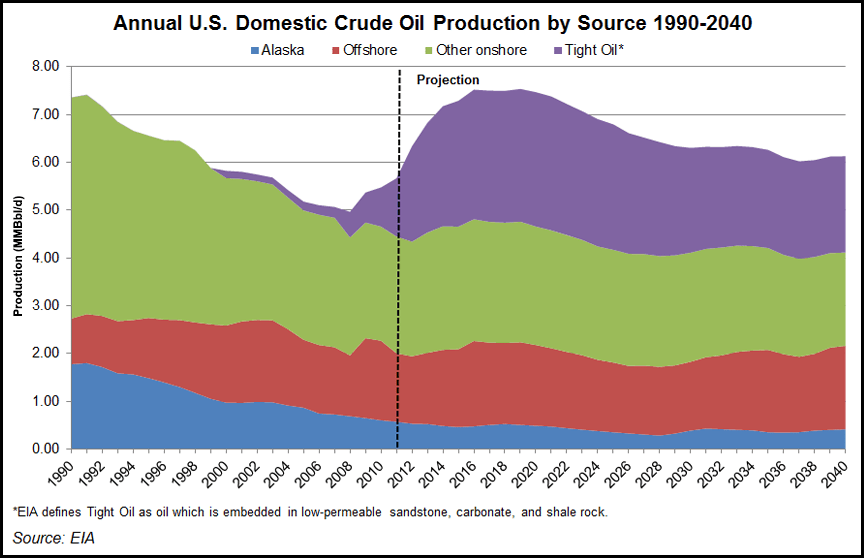 “Shale oil (light tight oil) is rapidly emerging as a significant and relatively low-cost new unconventional resource in the U.S.,” said the report. “There is potential for shale oil production to spread globally over the next couple of decades. If it does, it would revolutionize global energy markets, providing greater long-term energy security at lower cost for many countries.”

The potential oil price reductions could boost gross domestic product (GDP) in the United States, China and the Eurozone by 2-5%, while large net oil importers such as India and Japan might see their GDP increase 4-7%. At the same time, major oil exporters such as Russia and the Middle East “could see a significant worsening of their trade balances by around 4-10% of GDP in the long run if they fail to develop their own shale oil resources.”

Shale oil “could make the largest single contribution to total U.S. oil production growth by 2020,” displacing as much as 40% of waterborne crude oil imports, PwC said. However, if China begins to exploit its own shale oil resources, that “would further decrease its import dependency and increase effective supply to oil importing countries.”

China’s shale reserves are estimated to be the world’s largest. In April 2011, an initial assessment of world shale gas resources conducted by the EIA reported that China holds 1,275 Tcf of technically recoverable shale gas resources (see Shale Daily, April 7, 2011). That figure represents about 19.3% of the world’s total (6,622 Tcf) and is well above reserves in the United States, which were estimated at 862 Tcf.

Oil price reductions could also influence the dynamics of geopolitics, and force oil producers to review their business models, according to the PwC report.