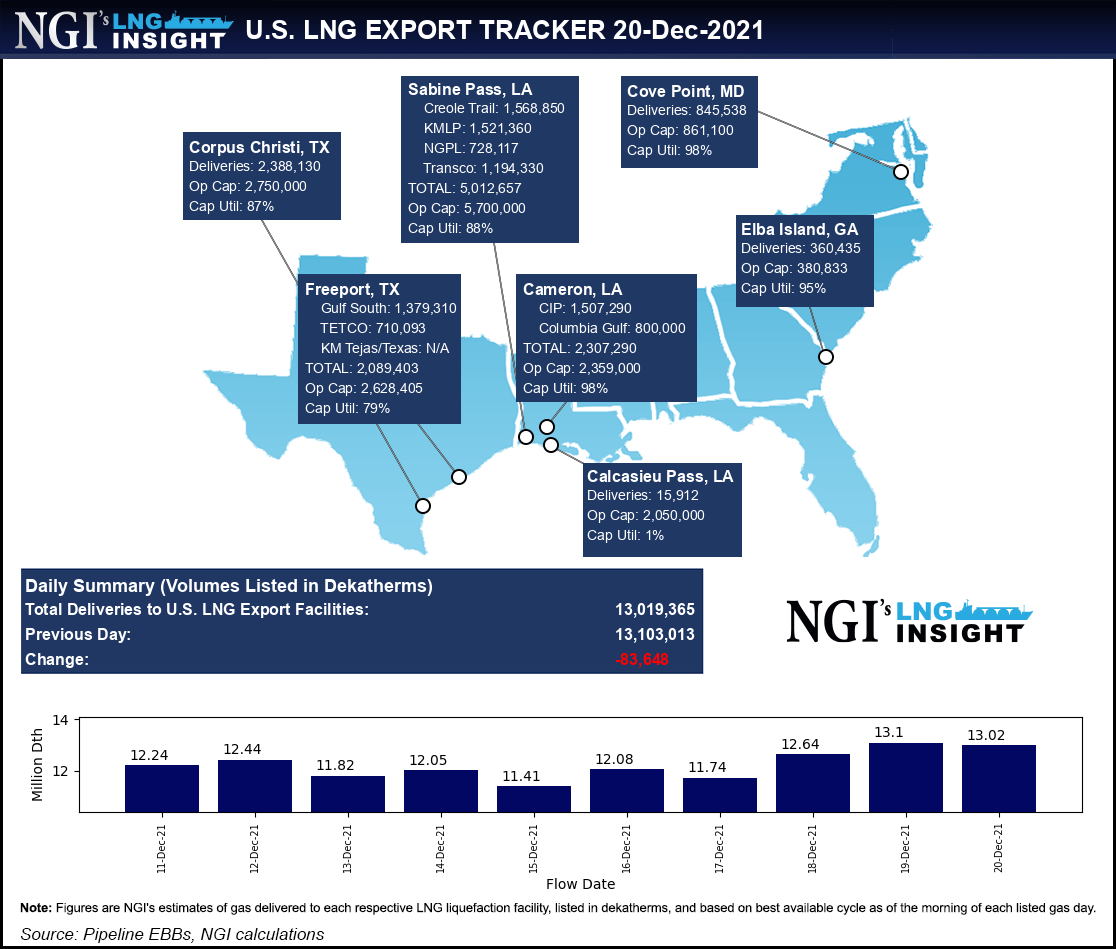 The Dutch Title Transfer Facility (TTF), a European gas benchmark, maintained a rare premium to the Japan-Korea Marker (JKM) in Asia. Both the January and February TTF contracts gained over $3 Monday and hit a record high well above $48/MMBtu. Forward gas contracts have surged by double-digits over the last month and gained again Monday as traders anticipate a tight global gas market through next winter.

Gazprom PJSC booked just a fraction of the capacity available to move additional Russian natural gas to Europe via pipeline at a monthly auction Monday. The company is also not selling spot gas on its electric platform, which it hasn’t done since early November.

Gazprom’s marginal bookings for January through key entry points on the Ukrainian and Slovakian border along with others in Poland and Germany suggest supplies to Europe will remain stable, but won’t increase next month.

Europe relies heavily on natural gas imports. TTF prices have maintained premiums of roughly $3-8 over the JKM prompt contract since last week. Given the spread, LNG cargoes are now being diverted away from Asia toward Europe. Market research firm Kpler said Monday that it was tracking eight vessels that had been redirected to the continent.

LNG deliveries could help ease prices, but for now colder forecasts and nearer-term supply concerns are pushing benchmarks higher as the holidays near.

“Provided TTF maintains the premium over JKM, then I expect this to continue,” Kpler Senior LNG Analyst Laura Page told NGI Monday in reference to cargo diversions. It’s the “usual story on the fundamentals in Europe – fast storage depletion, lower-than-usual Russian flows and below normal temperatures could be arriving for the Christmas period.”

Power prices on the continent are surging as cold weather, high natural gas prices and a lack of renewable energy output pushes them to records. Making matters worse, Electricite de France SA is shutting down roughly 10% of the country’s nuclear power capacity for maintenance that was delayed by the pandemic beginning next month and into February. France is an electricity exporter.

“Untimely French nuclear outages at four reactors through the end of winter suggest the need for increasing power sector gas demand to keep the lights on,” said EBW Analytics Group.

European natural gas storage inventories are at 60% of capacity, compared to the five-year average of 76%.

Asian LNG storage stocks in leading markets like China and Japan are high, according to Rystad Energy. The firm added that mild weather and soaring spot prices have curbed buying on the spot market in the region. But as cargoes have started diverting toward Europe, JKM spot prices jumped Monday by more than $4 to around $45/MMBtu.

Repeated delays for the Nord Stream 2 (NS2) pipeline are also likely to keep the global gas market tight through next year. The 5.3 Bcf/d system is considered a key outlet for getting more gas from Russia to Europe. While the pipeline is complete, it still needs regulatory approval.

The German regulatory agency overseeing power and natural gas markets said last week that it won’t certify NS2 for service in the first half of 2022. Still, Gazprom subsidiary Nord Stream 2 AG said Friday that it has started to fill the second leg of the system with natural gas to build pressure now that pre-commissioning is complete.

Meanwhile, in the United States, Henry Hub prices were up Monday on colder forecasts for much of the country. The prompt contract fell 6% last week and has recently underperformed highs seen in October. It finished at $3.834/MMBtu on Monday, up 14 cents from Friday’s close.

Given low Henry Hub prices and soaring overseas benchmarks, NGI data show the arbitrage spread for LNG cargoes between the Gulf Coast and Europe finished last week at $40.101/MMBtu for February delivery. The spread to Asia for February was at $36.618.

The massive arbitrage has pushed LNG feed gas demand stateside to record highs. Deliveries to U.S. export terminals hit a record over the weekend of 13.1 Bcf/d, according to NGI’s U.S. LNG Export Tracker.

Despite natural gas shortages, in other news last week Europe pressed ahead with a plan to continue curbing its reliance on fossil fuels. European Union (EU) long-term natural gas contracts would not be extended after 2049 under a package of legislative proposals put forward by the European Commission to decarbonize EU gas markets, promote hydrogen and reduce methane emissions.In the crude markets, Brent fell Monday, pressured lower by macroeconomic concerns over the spread of the Omicron Covid-19 variant. The prompt Brent contract gave up $2 and finished at $71.52/bbl. NGI data show LNG prices linked to both Brent and the Japan Crude Cocktail are under $13/MMBtu.