U.S. electricity generation from renewable energy – chiefly wind and solar – is expected to increase substantially in 2022 after a jump this year, though it would still trail natural gas by a wide margin, federal researchers said in a report. 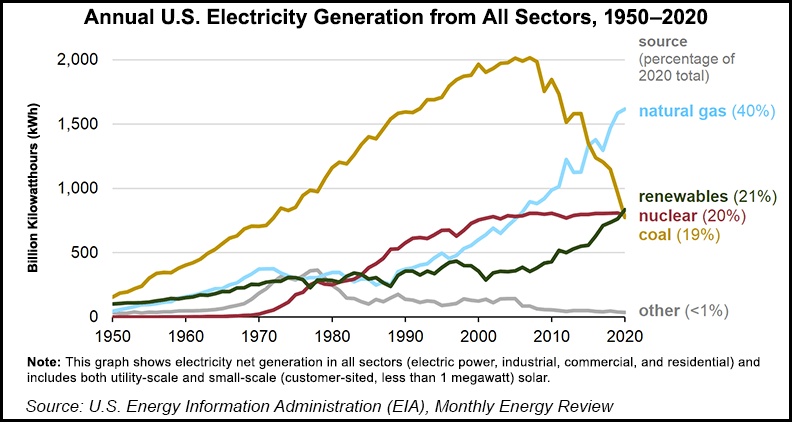 Renewables eclipsed both nuclear and coal for the first time in 2020, EIA said.

“We forecast that the share of electricity generation produced by natural gas in the United States will average 37% in 2021 and 35% in 2022,” EIA researchers said. Market share declines this year come in response to higher gas prices for electricity generators, which “we forecast will average $4.99/MMBtu compared with $2.40/MMBtu in 2020. The natural gas share declines in 2022 as a result of continued high fuel costs and an increasing share of renewable generation.”

Despite a pullback in recent weeks, natural gas prices have climbed in 2021 amid extreme weather-driven demand in North America and supply shortages across Europe and parts of Asia.

For the year ahead, EIA said, renewables would account for 22% of electricity generation. The total share for renewable energy, driven by increases in wind and solar generation, would be greater if not for declines in hydropower amid drought conditions in the West, researchers said.

Nuclear power’s market share is expected to hold steady at around 20%.

Interestingly, after a multi-year downward trend, EIA projects coal will gain share of the electricity generation pie this year.

“We expect coal-fired electricity generation in all sectors in 2021 to increase 18% from 2020 levels before falling 2% in 2022,” researchers said. They said utilities have this year increased use of coal because of lofty natural gas prices. Still, coal is expected to resume market share losses next year, given it has fallen out of favor amid a shift to cleaner energy sources.Coal-fired electricity generation in the United States peaked in 2007, and since then, natural gas-fired generation has largely supplanted coal’s declines, EIA said. Coal was the largest source of electricity in the United States until 2016.