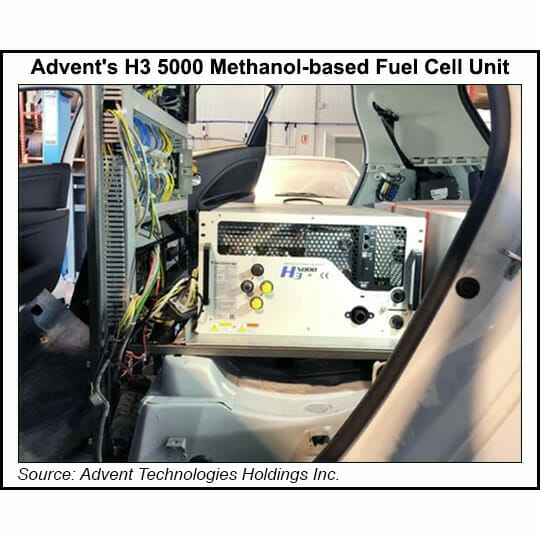 A modified Renault Zoé EV fitted with a methanol-based hydrogen fuel cell unit broke the previous world record for an FCEV, driving at about 31 miles/hour for 40 hours.

The drive took place at the Albi circuit in southern France. Five drivers from Arm Engineering drove the vehicle for the course of three days from early morning to midnight.

If produced at scale, “the fuel cell unit will add limited extra cost to a vehicle compared to a pure electric vehicle,” a spokesperson for Advent told NGI. “An EV with a range-extending fuel cell would have a smaller battery, which could offset, in part or completely, the cost of the fuel cell.”

Without modifying the Renault Zoé EV with a fuel cell unit, the vehicle has an estimated driving range of about 234 miles before requiring a charge.

The hydrogen fuel cell market “is potentially immense, and it is important to note that using fuel cells as range extenders for EVs is a perfect demonstration of how the two technologies are complementary,” the spokesperson said. “Fuel cells can solve the two main problems of EVs – charging infrastructure and range.”

The fuel cell unit used in the current project was “originally built for stationary applications,” the spokesperson said. Moving forward, the goal is to target 100,000 miles of operation for a high voltage fuel cell designed for mobility.

Hyundai Motor Co., Honda Motor Co. and Toyota Motor Corp. have put a combined total of 10 FCEV models on the market since 2021. Toyota’s 2021 Mirai held the previous record for the longest distance covered by a FCEV without refueling for 845 miles, which was set in October.

Advent in April collaborated with Hyundai on a technology assessment, development and sales agreement for its fuel cell technologies.