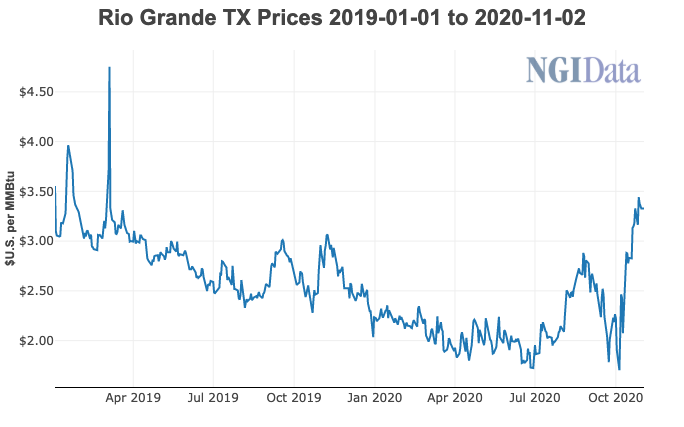 The following month, CFE announced an agreement with Mexican developer Fermaca that the utility said would result in savings of $672 million.

López Obrador and CFE General Director Manuel Bartlett Díaz alleged last year that the terms negotiated for seven pipeline contracts under the previous government were unfair to CFE, namely with regard to the take-or-pay and force majeure clauses.

As a result, they renegotiated five of the seven contracts in question, extending the terms from 25 years to 35 years and establishing a levelized rate for the entire period.

The pipelines faced delays for reasons ranging from permitting issues to opposition by indigenous groups and inclement weather, triggering force majeure clauses that meant CFE had to make fixed capacity payments for projects that were not yet in operation.

The dispute reached a crescendo last summer when CFE refused to sign a letter of acceptance allowing the mechanically complete 2.6 Bcf/d Sur de Texas-Tuxpan offshore pipeline to enter service until the contract terms were amended. An agreement was reached in August, allowing the vitally important conduit to enter commercial service.

Renegotiations of the Tula-Villa de Reyes and Tuxpan-Tula contracts are still pending. Both projects are owned by TC Energy.

The company said in its third quarter 2020 report that management continues to discuss settlement discussions with CFE for the two projects, neither of which is mechanically complete.

Construction of the Tula-Villa de Reyes section has been delayed “due to Covid-19 contingency measures which impeded our ability to obtain work authorizations as a result of government administrative closures,” TC Energy said, adding that construction is expected to conclude in the first half of 2021.

Construction of Tuxpan-Tula, meanwhile, has been delayed “due to a lack of progress to successfully complete Indigenous consultation” by energy ministry Sener, TC Energy said.

Infraestructura Energética Nova (IEnova) CEO Tania Ortiz Mena, meanwhile, said in the company’s 3Q2020 earnings call, “We are optimistic that we can reach a definitive solution” with a faction of the Yaqui indigenous community that opposes completion of the Guaymas-El Oro pipeline.

Ortiz Mena in October 2019 called the renegotiated contract terms for that pipeline a “win-win” for all parties.

Grupo Carso said before the pandemic it expected Samalayuca-Sásabe to enter construction later this year.

No injuries or deaths were reported, Cenagas said, adding that the cause of the explosion was not yet known.

At 5:02 a.m., Cenagas closed valves and suspended injections to the affected stretch of pipe. The operator said the incident was completely under control.