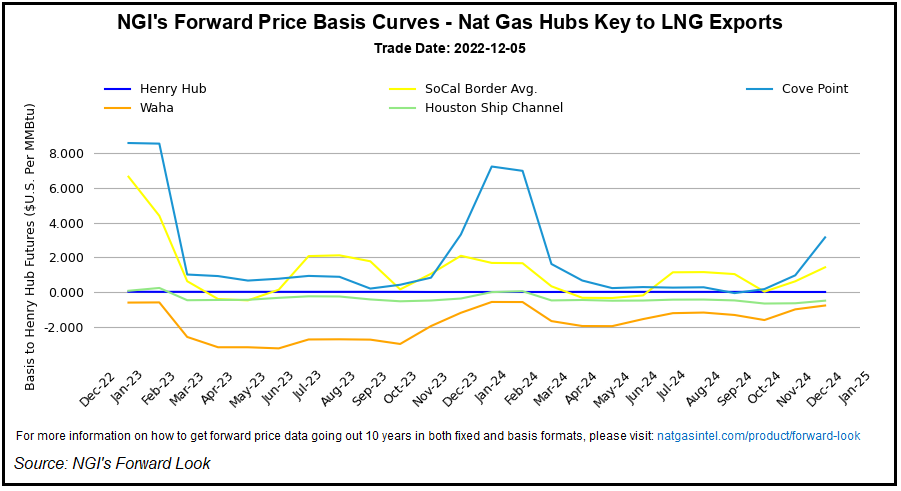 Even after shedding a monstrous amount of heating demand from the 15-day weather outlook, models have yet to show with certainty any significant cold returning to the Lower 48 before the end of the year. What’s more, if anything, there are risks the data could trend even warmer, according to Maxar’s Weather Desk (MWD).

MWD said the forecast for the next couple of weeks reflects mostly above-normal temperatures from the Plains to the East Coast. Models continue to hold onto some Arctic blocking in the West and at times in the South, particularly in the latter part of the period, but there are some discrepancies in the models as to how much cold blankets the eastern United States in late December.

“Risks to the forecast are warmer in the eastern half,” MWS forecasters said.

The midday Global Forecast System (GFS) added back a modest amount of demand to the 15-day forecast, but did little to change the overall bearish outlook. NatGasWeather noted that  the GFS continued to suggest colder air may finally spread south and eastward out of the Rockies and Northern Plains Dec. 16-20 for more seasonal demand. The forecaster questioned, however, whether seasonal demand would be good enough after two solid weeks of solidly bearish demand.

“Likely not and where the onus is on frigid weather patterns showing up for late December and early January or winter risk will continue to evaporate,” NatGasWeather said.

Even with the slight revision in the latest weather model, Mobius Risk Group pointed out that what little bullish tilt the upcoming pattern had compared with the same period last year has deteriorated substantially over the past week. After a “remarkable failure” in forecasts, total degree days (TDD) for the 15-day period are now sitting only around 30 higher than last year, down from closer to 100 during the middle of last week, Mobius said.

Meanwhile, storage data continued to trickle in for market observers on Tuesday, painting an even less supportive outlook for prices. Early storage withdrawal estimates have whittled down from last week, with the mild temperatures in the forecast likely to flip inventories back to a surplus to the five-year average within weeks.

NGI is modeling a 25 Bcf decline in stocks for the week ending Dec. 2. This compares with a 49 Bcf withdrawal in the similar year-ago period and the 59 Bcf five-year average.

Mobius noted that the reference period in the Energy Information Administration’s (EIA) upcoming inventory report was almost identical to the same period last year in terms of TDDs. However, the weather pattern was almost exactly inverse, with the West seeing most of the cold and areas west of the Mississippi River seeing widespread warmth.

Insufficient storage capacity, pipeline import capacity and maxed out Canadian imports left the West “very short supply” last week, according to Mobius. This led to soaring spot prices across the region, with some locations nearing $20. Similar price levels were seen on Monday.

“As the rest of this winter progresses, this issue in the West will be interesting to follow, particularly if it ever gets cold again in the East,” Mobius natural gas analyst Zane Curry said.

“As yet, the West has not really had to compete with the Upper Midwest for molecules at all,” the analyst noted. “If a blast of polar air ever becomes entrenched near the Great Lakes while the West is also cooler than normal, it could create an interesting battle for Rockies supply, which at the same time could experience losses due to freeze-off.”

Weather aside, the market remains on pins and needles awaiting word of Freeport LNG’s return after a half-year outage. The liquefied natural gas export facility has been offline since a June fire, with a late-December target by the company for starting initial operations.

Feed gas deliveries at other U.S. terminals also have fluctuated over the past week.

Rystad Energy noted that the Corpus Christi and Calcasieu Pass LNG export facilities experienced reduced flows recently for a few days. While Corpus Christi recovered last week and is back to full capacity, Calcasieu Pass reached record levels of 1.84 Bcf/d on Nov. 29 but then fell to 1.3 Bcf/d over the weekend. It was back near 1.7 Bcf/d by Tuesday.

“While these reductions were marginal, only lasting a few days, they are a reminder of the broader risk associated with facility operations throughout the winter season,” said Rystad Vice President Emily McClain.

With the prospect of inclement weather conditions and LNG facilities that have pushed their limits nearly all year, markets continue to be on edge, she said. At the same time, recent winter weather forecasts have turned grim for Europe and Asia, driving up demand for U.S. LNG deliveries.

Spot gas generally traded sideways on Tuesday, with few big moves one way or the other as a mostly mild weather pattern remains firmly in place.

California prices remained more than triple the amount of benchmark Henry Hub on Tuesday, but started to come off recent highs. Little has changed on the weather front, with below-normal temperatures, snow and rain still in the forecast for this week.

Nevertheless, cash prices at the SoCal Citygate lost $1.260 day/day to average $17.730 for Wednesday’s gas flow, while locations in the northern part of the state continued to strengthen. PG&E Citygate jumped 62.5 cents to $17.795.

Over in the Rockies, points along the Northwest Pipeline diverged on Tuesday. Northwest S. of Green River saw cash prices shoot up 71.5 cents to $6.565, while Northwest Sumas tumbled 86.0 cents to $16.005.

Wood Mackenzie noted that Gas Transmission Northwest (GTN) began maintenance Tuesday on Sandpoint Station 4 that was scheduled to last through Thursday. The work would reduce the operating capacity of the Flow Past Kingsgate (Kingsgate) segment to 2,577,060 MMBtu/d.

GTN has another one-day maintenance event planned for Thursday. The work at Eastport Station 3 is expected to drop operating capacity at Kingsgate by an additional 93,730 MMBtu/d.

The pipeline also warned shippers that firm services would be reduced by 8% on Wednesday and by 11% on Thursday.

Elsewhere across the country, price decreases moderated a bit. East Coast spot gas prices fell mostly less than a quarter, while in the Midwest, losses were capped at around 15.0 cents at the majority of locations.

Next-day gas prices were on the rise throughout the Southeast and Louisiana. Texas locations were a mix of modest gains and losses, including a move back into positive territory for West Texas hubs.