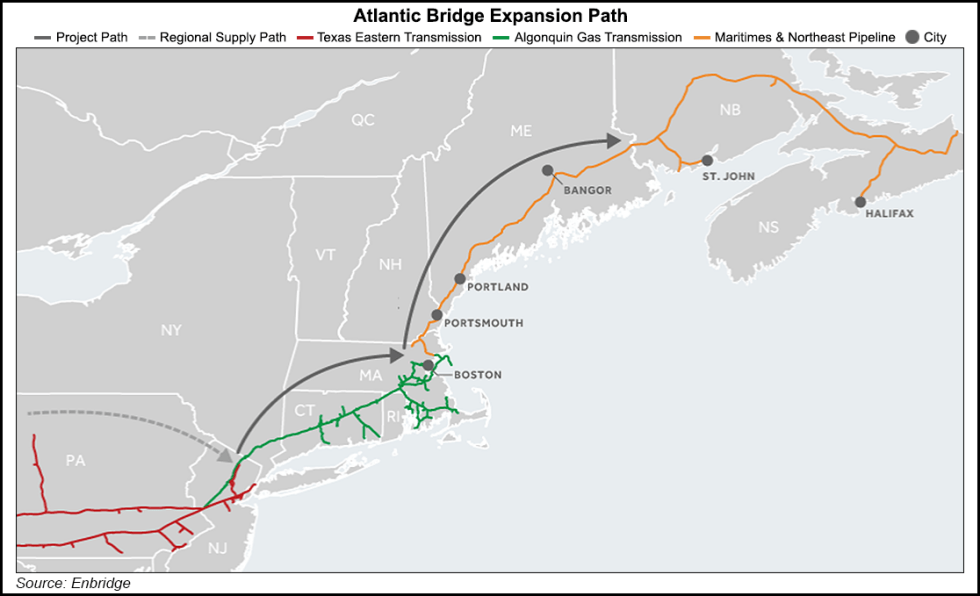 There was disagreement among commissioners, with Richard Glick calling the project “a poster child for what I think is wrong with what’s going on with the Commission’s review process.”

In what Glick said was an unprecedented move, Algonquin’s Dec. 26, 2018 filing for extension was approved by Federal Energy Regulatory Commission staff in less than an hour [CP16-9]. “I think at the very least we could have granted rehearing and reconsidered the request here by Atlantic Bridge Pipeline to be extended,” he said.

Atlantic Bridge is a 132,700 Dth/d expansion of the Algonquin and Maritimes & Northeast pipeline systems in New England, designed to flow south-to-north into Canada. The $452 million project by Algonquin, an affiliate of Calgary-based Enbridge Inc., has been built in phases in New York and Connecticut, but progress was hampered in Massachusetts over air quality concerns. The project was originally scheduled to enter service in November 2017, but Algonquin now expects to begin service in the second half of 2020, according to its website.

FERC granted Algonquin authorization to build and operate Atlantic Bridge in January 2017. FERC later reaffirmed its decision in an order and turned down previous requests for rehearing by environmental groups opposed to the project.

It was the first of several FERC votes on natural gas pipelines Thursday. Glick dissented on most of them and a laundry list of liquefied natural gas (LNG) items also approved by FERC Thursday.

“I continue to have discussions with my fellow commissioners about greenhouse gas emissions associated with pipelines and LNG facilities,” Glick said. “Suffice it to say that I continue to think that the Commission is violating what the DC Circuit has told us to do on numerous occasions.”

Commissioners also granted a PennEast Pipeline request to extend its deadline to complete construction and make available for service its Appalachia to Pennsylvania and New Jersey pipeline to Jan. 19, 2022 [CP15-558]. The vote follows FERC’s decision last month that the beleaguered project may condemn state-owned land as a certificate holder with the power of eminent domain.

The decision was seen as putting the project in a better position to petition the U.S. Supreme Court for review of an adverse ruling from the U.S. Court of Appeals for the Third Circuit that stopped it from seizing land in New Jersey.

PennEast has been in the works for about five years, but it has yet to receive a water quality certificate and other permits in New Jersey, which along with environmental groups has largely opposed the project. The project would move more than 1 Bcf/d of Appalachian gas to markets in Pennsylvania and New Jersey. About one-third of the pipeline would be in New Jersey’s Hunterdon and Mercer counties.

Also on Thursday, FERC denied a request for rehearing and stay of an order granting authorization of Tennessee Gas Pipeline Co.’s 261 Upgrade project, which would add 72.4 MMcf/d of additional transportation capacity in Massachusetts [CP19-7]. In addition, commissioners approved a partial waiver of a certificate condition for the project, which one of Tennessee’s two shippers terminated its precedent agreement. The project was one of four gas pipeline projects approved by FERC in December.