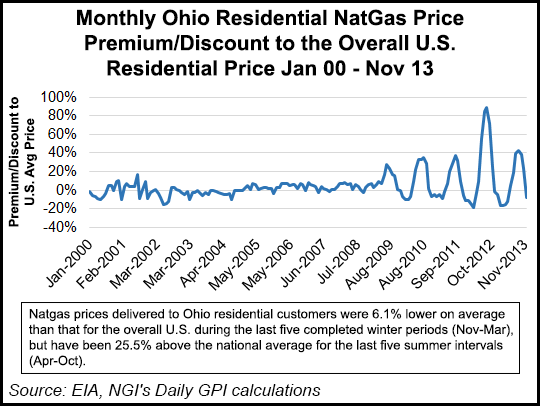 Dan Creekmur, vice president and general manager for the utility, Columbia Gas of Ohio, said the company considered the bitter cold temperatures that hit northern Ohio the week of Jan. 6 to be a one-in-20 year weather event. A second cold snap, which hit the region during the week of Jan. 26, was considered a one-in-10 or one-in-15 year event, depending on the particular area of Columbia’s service territory (see Daily GPI, Jan. 27; Jan. 6).

“[These were] significant events no matter how you look at it,” Creekmur said. “At the outset, I would comment that Columbia’s system handled the cold weather and customer demand extremely well.”

But Creekmur conceded that two separate incidents involving regulator stations caused thousands of customers to temporarily lose gas service. He said the first incident occurred at approximately 6 p.m. on Jan. 6 in North Ridgeville and Elyria, knocking out service to 2,633 customers.

“While our investigation is ongoing and to offer a definitive cause would amount to speculation, I can say a loss of inlet pressure to this particular regulator station occurred,” Creekmur said. “This can happen for any number of reasons. Excessive moisture in the system, instantaneous peak demand, physical capacity of a particular system, and other [reasons] can all play a role in loss of pressure.”

A second incident occurred at 7 a.m. on Jan. 29 at Crooksville, which caused 956 customers to lose gas service. “Again while our investigation continues [and] I cannot speculate as to all factors associated with the cause, [we] believe mechanical failures at a town border station led to a loss of inlet pressure, again at a regulator station,” Creekmur said.

After the North Ridgeville incident, Creekmur said the utility looped its system by tying 2,000 feet of four-inch diameter plastic pipe with a second parallel system. He said the company also installed 1,000 feet of two- and four-inch diameter pipe to move 340 customers to a neighboring system, and installed an ERX electronic pressure recorder at the regulator station for monitoring through Columbia’s gas control system.

Creekmur said Columbia was also successful in getting certain commercial and industrial customers to voluntarily shed some of their gas load during peak morning hours for human needs customers. “I can say, although I cannot [provide specifics], our upstream supplier also took remediation actions on their own system,” he said.

“Columbia has confirmed that physical changes to an upstream system have been made that minimize the probability of recurrence. While I would never minimize the impact an outage has on even one customer, Columbia has the utmost confidence in its system. Columbia’s actions both during these outages and after demonstrate that we are committed to providing safe and reliable service even in the face of historic weather events. [But] Columbia firmly believes one customer out is one too many.”

According to Creekmur, system throughput was recorded at just below 2.5 million Dth on Jan. 6, which made it the second-highest day for throughput in Columbia’s history. The record was just above 2.6 million Dth, recorded on Jan. 18, 1994. Throughput totaled 2.35 million Dth of Jan. 28.

Jeff Murphy, managing director of commercial operations for Dominion East Ohio (DEO), cited a Jan. 7 graphic by the Wall Street Journal during his remarks before the PUCO board.

“You can see Akron and Cleveland set all-time record lows [on Jan. 6],” Murphy said. “It shows not only how cold it was in our area but also how widespread the cold was.

“If you think about the interstate pipeline grid, it’s very essential to us because of the fact we’re drawing supplies from a wide range of regions. And so heading into this particular event, we realized that it wasn’t isolated to northeast Ohio by any means, and that there could be some ancillary impacts with regard to gas supply.”

Murphy added that communication was crucial to get through the polar vortex events.

“Absent effective communication this doesn’t work well,” Murphy said. “We have more than 40 gas suppliers delivering to us. We have seven different interstate pipelines. We have literally scores of local Ohio producers. Those are the very entities that we need to communicate with as the system is being stressed in the kind of manner that it was.”

“We had more stress on the supply grid since we began opening up our system to our energy choice program in October 2000,” Murphy said. “This was a real acid test on the suppliers and they passed with flying colors.”

Patrick Rau,NGI director of strategy and research, said Ohio’s residential gas customers have been the victims of price volatility for years, and not just during the winter.

“It’s bad enough for Ohio to experience issues with natural gas deliveries during the winter months, but residential customers in the state have been experiencing pain in the summer months as well,” Rau said in a note Friday. “According to the data from the U.S. Energy Information Administration, while residential prices in Ohio averaged 6.1% less than the overall U.S. residential price during the five most recently completed winter seasons (November-March), they averaged 25.5% more than the U.S. average price over the last five summer periods (April-October).

“Moreover, residential price volatility in Ohio has skyrocketed in recent years after remaining relatively tame between 2000-2008.”