Mexico’s IPGN monthly natural gas price index reached its lowest-ever average in both peso and dollar terms during March, reflecting the U.S. benchmark prices to which a majority of transactions in Mexico are linked. 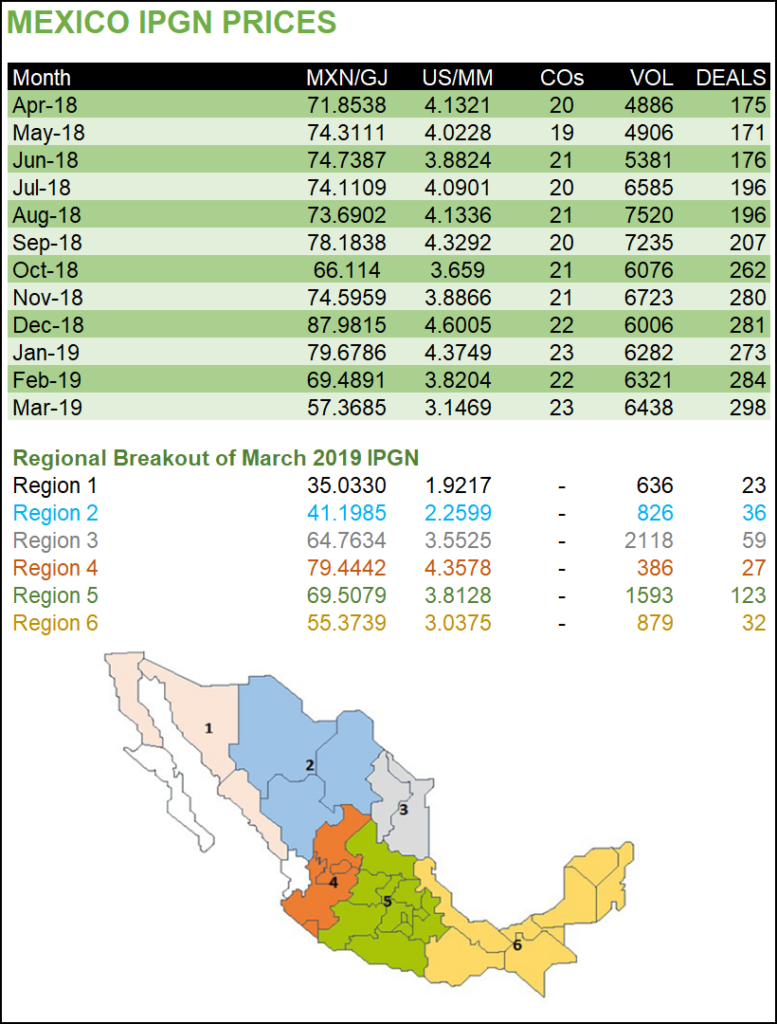 The IPGN is meant to serve as a reference until Mexico’s newly liberalized gas market becomes liquid and transparent enough for third-party indexes and local trading hubs to emerge.

Total transacted volumes averaged 6.438 Bcf/d, the sixth-highest monthly average out of the 21 months that the IPGN has existed. A total of 23 companies reported transactions, compared to 22 in March 2018.

“Bigger sized companies likely were a bit quicker to adapt to the new marketplace, but more recent data suggests that their smaller counterparts may be becoming more engaged themselves.”

Among respondents polled in NGI’s inaugural survey of Mexico natural gas buyers and sellers, nearly 60% of natural gas purchased and sold in Mexico or at the U.S.-Mexico border is either priced via a premium to a U.S. index, or using the Petróleos Mexicanos (Pemex) firsthand sales pricing mechanism (VPM), which is itself derived from various Texas indexes.

“The IPGN has shown a pretty strong correlation to U.S. prices since its inception in July 2017, as shown by the correlation coefficient of 0.633 between the IPGN and a simple average of Henry Hub, Houston Ship Channel, and El Paso-Permian prices,” Rau said. “Those U.S. indexes have trended lower so far in 2019, especially the El Paso-Permian price, and that has translated to lower prices in Mexico.”

The delays and transport bottlenecks, combined with falling domestic gas production by Pemex, have led to concerns of power outages and gas rationing for consumers in the industrial and power generation segments.

The most anxiously awaited pipeline projects include the 2.6 Bcf/d Sur de Texas-Tuxpan offshore pipeline under development by TransCanada Corp. and Infraestructura Energética Nova (IEnova), as well as the final three sections of Fermaca’s Wahalajara pipeline system.

The Texas-Tuxpan pipe, which has faced repeated delays, is now slated to enter operation in late June, according to the director of CFE’s gas trading arm, CFEnergía.

The final sections of Wahalajara, comprising the 1.189 Bcf/d La Laguna-Aguascalientes and 886 MMcf/d Villa de Reyes-Aguascalientes-Guadalajara pipelines, are scheduled to come online in May, according to the latest projections from energy ministry Sener.

Upon its completion, Wahalajara will allow Permian gas to reach the industrial hub of Guadalajara, Mexico’s second most populous city.

“Reported volumes and transactions should increase somewhat in the next few months, as the Wahalajara system is expected to come online in May, followed by the startup of Sur de Texas-Tuxpan in June or July,” Rau said. “However, I don’t expect either of those systems to run close to full capacity for quite some time.”

Rau also cautioned that the number of transactions in Mexico “will likely only grow so much until there is both more certainty in Mexico with respect to potential policy changes from the new administration, and until the Mexico pipeline grid is more fully completed and integrated.”