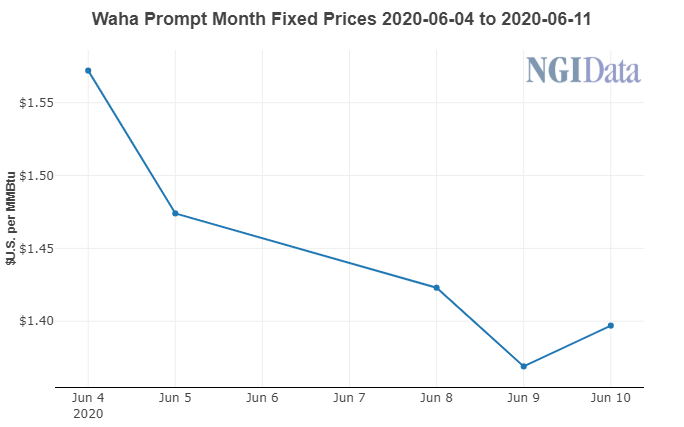 July prices averaged 5.0 cents lower, as did the balance of summer (July-October). Prices further out the curve were marginally higher, except in the Permian Basin, which saw losses extend across the strip as regional production has shown signs of a recovery.

The small price changes at most markets across the country mirrored the modest swings in Nymex futures, which appear to have stabilized in the last couple of weeks as traders await a larger shift in the supply/demand balance. The July futures contract slipped only around 4.0 cents from June 4 to settle Wednesday at $1.780. The balance of summer also fell around 4.0 cents during that time to $1.898, while the winter strip (November-March) picked up a penny to reach $2.800 and next summer (April-October) rose 2.0 cents to hit $2.542.

Weaker liquefied natural gas (LNG) demand is said to account for some of the pressure on prices, and EBW Analytics Group said prices could fall further in the near term as LNG demand has tracked under 4.0 Bcf/d for five consecutive days. Although NGI data on Thursday pointed to feed gas volumes slightly above 4 Bcf, more downside risk looms as U.S. cargo cancellations are expected to continue into the fall.

“The July contract has closed between $1.767 and $1.822 every day in June as the market struggles to balance weak LNG demand and sky-high inventories against sinking production and an economic recovery,” said EBW.

The International Energy Agency this week echoed projections by other researchers in seeing much slower demand across the export spectrum in the near term. As of early June, all major gas markets worldwide were experiencing a sharp decline in demand or growth, researchers said. More mature markets across Europe, North America and Asia are forecast to see the biggest drops this year, accounting for 75% of the total decline.

“Slower growth in global gas demand in the coming years is likely to result in capacity outpacing LNG imports through 2025, limiting the risk of a tight LNG market for the time being,” IEA researchers said.

In the meantime, EBW said Thursday’s weekly storage inventory report could provide a bounce for gas prices if the Energy Information Administration (EIA) had reported an injection lower than expectations. However, concerns of completing filling storage by October remain, and any bounce still would likely keep prompt-month prices within their recent trading band.

Rather than surprising to the low side, the EIA delivered an on-target injection for the week ending June 5. The reported 93 Bcf build was on par with the Bespoke Weather Services projection and thus, the firm viewed the report as “neutral.”

The EIA figure is reflective of tighter balances than seen in many weeks, according to Bespoke, although the issue from here is lower week-on-week LNG volumes. This means “that demand has to again pick up more slack to maintain the balance. As such, staying range-bound, price wise, continues to seem like a higher-odds scenario.”

Market observers on online energy platform Enelyst noted the lack of reaction from Nymex futures once the EIA data was released. Instead, it’s become a waiting game for “some dramatic demand or production stats to bust the range open.”

Broken down by region, the Midwest reported a 28 Bcf injection into inventories, while the East added 27 Bcf, according to EIA. South Central stocks rose by a cumulative 22 Bcf, which included a 19 Bcf build in nonsalt facilities and a 4 Bcf build in salts. Both the Mountain and Pacific regions reported small injections of less than 10 Bcf.

From here, Enelyst managing director Het Shah said the market would need to inject about 6.75 Bcf/d to reach an end-October 3.8 Tcf in storage. “Last year, we injected about 11 Bcf/d on average during the last 150 days of summer.”

NatGasWeather forecaster Rhett Milne said it’s “going to be tough to erase surpluses ahead of winter at this rate.” The market needs to see a tighter supply/demand balance or hotter weather. Prospects for widespread heat materialize beginning next Thursday (June 18) through June 23, but it “needs to be sustained,” he said.

The EIA isn’t holding out much hope for power usage this summer. It expects power demand between June and August to fall 5% year/year to 998 billion kWh, the lowest level of summer electricity consumption the Lower 48 has experienced since 2009.

Leave it to Texas, however, to march to the beat of its own drum. The Electric Reliability Council of Texas, or ERCOT, the grid operator for most of the state, is forecasting record power usage this summer even after factoring impacts from Covid-19. ERCOT indicated it could implement some energy emergency alerts to cope with the potential strong demand.

Notwithstanding the impacts from Covid-19, Permian Basin gas pricing has experienced quite a boost over the last couple of months as a major pullback in oil activity has lowered associated gas. However, that upward pricing momentum may have reached its breaking point as higher oil prices could have incentivized some producers to return to the West Texas/New Mexico play.

Earlier this spring, the Permian was producing more than 12 Bcf/d of associated gas, even as pricing in the region oftentimes plunged below zero. However, once West Texas Intermediate (WTI) crude also plunged into unprecedented negative territory, the U.S. rig count started dropping, leading to a decline in associated gas production below 10 Bcf/d by late May.

Now that WTI prices appear to have settled comfortably in the mid-$30/bbl range, rumors have circulated that some exploration and production companies have started bringing wells back online, even as others have filed for bankruptcy protection. However, so far, there is little data to support the notion of a major supply recovery for oil or natural gas.

That said, there has been a modest rebound. Pipeline flows point to Lower 48 gas production recovering since hitting a low of 84.9 Bcf/d on May 20, largely from recovering oil prices, according to Genscape Inc.

Production bounced above 86 Bcf/d on May 23 and has averaged 86.3 Bcf/d since then, the firm said. However, day-to-day figures can be finicky, especially this time of year when pipelines are conducting routine maintenance.

“Top day production for June 11 fell sharply to 85.4 Bcf/d, but June 9 and 10 numbers were revised up 600 MMcf/d to reach above 86 Bcf/d,” said Genscape analyst Josh Garcia. Thursday (June 11) production should be revised upwards as well.”

Recovered production since May 23 has been centered in the Permian, which has grown more than 1.2 Bcf/d, according to Genscape. Oklahoma (plus 420 MMcf/d) and West Virginia and Ohio also have contributed larger volumes (plus 570 MMcf/d).

Meanwhile, former Tropical Storm Cristobal, which made landfall last Sunday in Louisiana, is still affecting production levels, with offshore production as of Thursday still down around 150 MMcf/d and North Louisiana down about 470 MMcf/d, Genscape noted.

“…Production has a long way to recover, as it averaged 93.1 Bcf/d from the beginning of March to April 20, the last time production levels were above 92 Bcf/d,” Garcia said.

The long road to full recovery didn’t stop a steep slide in Permian gas pricing this week, with losses extending across the forward curve.