Fresh off a record-setting Nor’easter that dumped more snow along the upper East Coast than all the snowstorms in 2019 combined, natural gas forward prices finally snapped a three-week losing streak. January prices jumped 22.0 cents on average between Dec. 10 and 16, while the balance of winter (January-March) climbed 18.0 cents, according to NGI’s Forward Look. 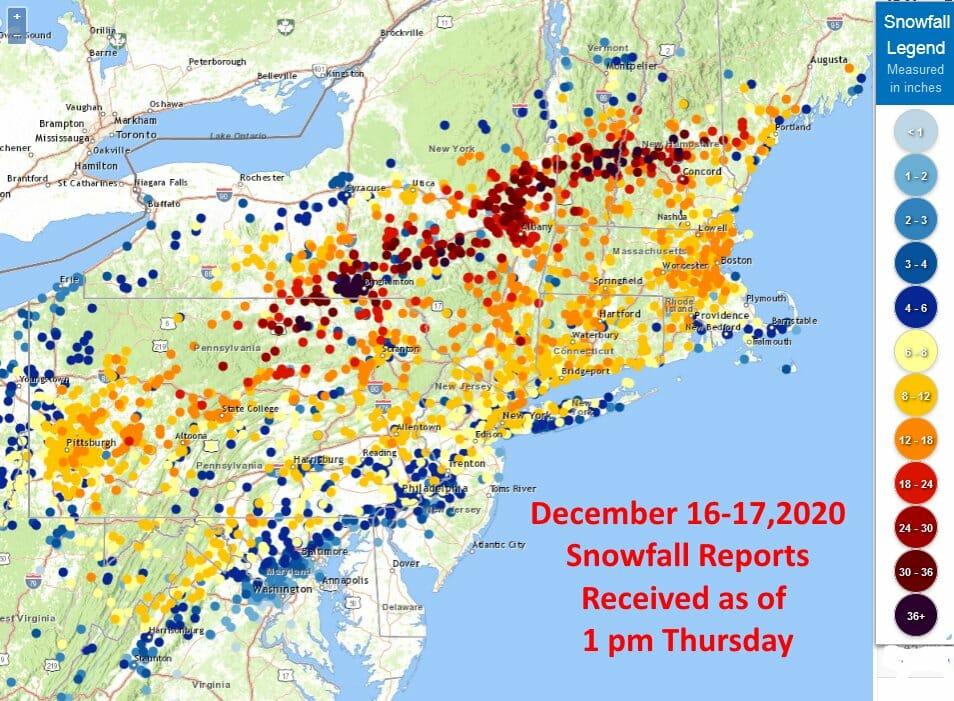 Prices further out the forward curve also strengthened as the story for liquefied natural gas (LNG) demand in 2021 may be gearing up for a surprise plot twist. A sustained drop in production also factored into the gains. Summer 2021 (April-October) prices averaged 11.0 cents higher from Dec. 10-16, and the winter 2021-2022 strip picked up 12.0 cents on average.

The double-digit rally along forward curves closely mirrored the recent strength in Nymex futures. On Wednesday, the January Nymex contract stood at $2.677/MMBtu, up about 12.5 cents from Dec. 10. Similar gains extended across the futures strip, with the balance of winter settling around $2.680, the summer 2021 package hitting $2.780 and winter 2021-2022 landing at around $2.990.

EBW Analytics Group said winter supply adequacy concerns remained “improbable” at this point. Although a blockbuster snowstorm across the upper Eastern Seaboard Wednesday was expected to hang around through Friday, a quick warm-up was forecast to follow.

NatGasWeather said the latest data showed conditions becoming “too mild” over most of the United States late this weekend through the middle of next week as cold air retreated into Canada. A strong cold shot was expected around Christmas Day through next weekend (Dec. 25-27), but that too would be followed by warmer temperatures returning Dec. 28-29.

“However, we continue to view this milder break Dec. 28-29 as cold reloading over Canada for a potential return push into the U.S. Dec. 31-Jan. 2,” NatGasWeather said. “It’s important cold comes through Dec. 25-27 and Dec. 31-Jan. 2 to make up for the exceptionally mild November and first half of December.”

Unlike the rather balmy backdrop that has characterized much of the U.S. winter to date, more frigid conditions have hovered overseas in some of the Lower 48’s largest export markets. Reports that extreme conditions in Asia have led to a bid of $15.28 for LNG cargoes to be delivered in early January, together with steep drawdowns in European storage, are increasing expectations for domestic LNG in 2021, according to EBW.

BofA Global Research analysts shared that sentiment in a recent note. The analysts said Asian LNG prices were projected to remain strong enough through next summer to prevent significant cancellations of U.S. LNG cargoes. Projected U.S. export arbitrages for next summer are now positive, in the range of 75 cents to $1.00, according to the analysts.

“Thus, we assume near max utilization rates of U.S. LNG export facilities next year and see Asian demand supporting Henry Hub prices above $3/MMBtu in the summer,” they said.

It was only a few months ago that Raymond James & Associates Inc. analysts said global gas fundamentals were expected to tighten considerably this winter and over the long term, but U.S. cargo cancellations could materialize as soon as next May. An estimated 165-200 U.S. LNG cargoes were canceled earlier this year as depressed demand from the Covid-19 pandemic and other factors drove Asian and European benchmarks to parity with Henry Hub for much of the summer.

Meanwhile, falling U.S. production over the next six to eight weeks could reinforce the longer-term bullish price outlook. Dry gas supplies have struggled since early December, and the combination of freeze-offs and higher pipeline pressures reducing flowing production may increase the market’s focus on a “tremendously undersupplied” calendar year 2021, according to EBW.

“In our view, Nymex natural gas prices may have to rise high enough to shut-in volumes,” the firm said. “In this context, global LNG strength may prove very bullish for Nymex futures in 2021.”

Until then, domestic weather forecasts should continue to drive the market, with weekly storage data occasionally moving the price needle. On Thursday, after two straight days of nearly flat futures prices, the Energy Information Administration’s (EIA) triple-digit storage withdrawal sent the market lower despite the figure coming in very close to consensus.

The EIA reported that inventories for the week ending Dec. 10 fell by 122 Bcf, which compares with the 97 Bcf decrease recorded in the year-ago period and a five-year average pull of 105 Bcf. Ahead of the report, predictions clustered around a draw near 120 Bcf, but some estimates were for a much steeper pull and could be why prices softened after the report. A Bloomberg survey produced a withdrawal range from 105 Bcf to 138 Bcf, with a median of 119 Bcf. A Wall Street Journal poll had the same results, while a Reuters poll produced a median draw of 120 Bcf. NGI projected a 133 Bcf pull.

NatGasWeather’s 120-121 Bcf estimate was close to the actual figure, but the forecaster said the market clearly was hoping for something larger. It didn’t “see a good reason” to expect a draw near 130 Bcf but said the markets must have been expecting the heftier pull, as prices quickly fell.

Broken down by region, the EIA said South Central inventories dropped 38 Bcf during the reference week, including a 25 Bcf pull from nonsalt facilities and a 13 Bcf pull from salts. The Midwest withdrew 36 Bcf, while the East drew 34 Bcf. Inventories in the Mountain and Pacific region each fell by less than 10 Bcf.

Total working gas in storage as of Dec. 11 stood at 3,726 Bcf, 284 Bcf higher than year-ago levels and 243 Bcf above the five-year average, according to EIA.

“To our view, the 122 Bcf draw is still quite tight and should lead to a draw of over 150 Bcf next week to further decrease surpluses.”

Though forward price gains were widespread across the country during the Dec. 10-16 period, the massive snowstorm on the East Coast prompted a far more substantial rally in regional markets there.

The week’s rally was aided in part by the extensive gain in cash prices ahead of the storm. Markets across the region set multiple records throughout the week. Genscape Inc. pointed out that Wednesday’s surge to fresh highs occurred despite the EIA East pipeline demand sample down 1.4 Bcf/d day/day to 34.5 Bcf/d. The firm said New England was the only subregion where demand had strengthened, gaining around 100 MMcf/d to average 4.1 Bcf/d.

However, Genscape analyst Josh Garcia said revisions brought down the New England demand sample from previous days. Tuesday’s demand was currently at 3.7 Bcf/d, and Wednesday’s demand was revised down to 4.0 Bcf/d.

“This bullishness should continue, with the current cold front expected to peak Friday and sustain colder than average temps” through Sunday (Dec. 20), he said.

AccuWeather said in less than 24 hours, the Northeast was transformed into a winter wonderland as one of the biggest snowstorms in years buried the region. A heavy band of snow took shape on the northwestern edge of the storm late Wednesday afternoon, in some areas unloading several feet of snowman material through Thursday from central Pennsylvania, across upstate New York and into interior New England.

Williamsport, PA, home to the Little League World Series, measured 24.7 inches of snow on Thursday morning, according to AccuWeather. Throughout the 125 years of record-keeping in the area, it was the biggest single snowstorm in the city’s history.

Though impressive, the record was dwarfed by what unfolded farther north, the forecaster said. “A yardstick wasn’t tall enough to measure the snow that fell” around Binghamton, NY, where more than 40 inches piled up in less than 24 hours, said AccuWeather meteorologist Brian Lada.

With Jolly Old St. Nick set to land his sleigh next week, the record-setting snow from the storm combined with an expected cold pattern may bode well for a White Christmas in the Northeast after all. NatGasWeather said the Global Forecast System’s midday run trended further cooler with a weather system into the Plains Dec. 24 and then spreads it faster into the South and East for Christmas Day through Dec. 26.