Pennsylvania likely became a net natural gas exporter in late 2009, but growing supplies are still whetting the state’s appetite for more, according to an analysis by Pennsylvania State University’s Marcellus Center for Outreach and Research. 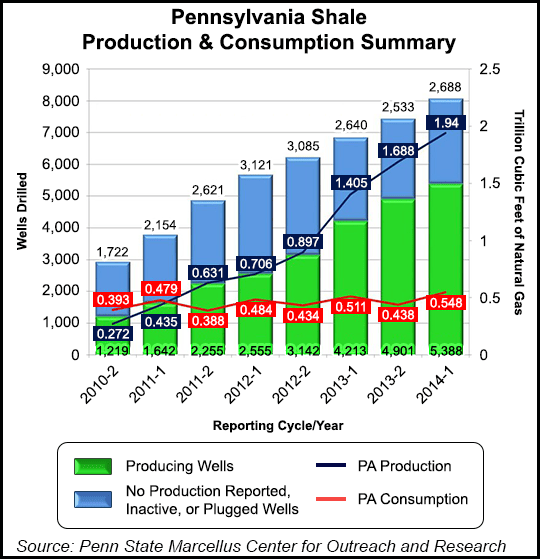 In its latest review of the raw production data submitted to the state Department of Environmental Protection and released earlier this month (seeDaily GPI, Aug. 19), MCOR found a correlation between growing supplies and demand in Pennsylvania. The state has increased its annual consumption by about 13% in the last four years, or just above 110 Bcf, to 1 Tcf, while the state’s power generation sector has increased its consumption by 24% annually, or nearly 70 Bcf at the same time.

In March, the U.S. Energy Information Administration said it projected 60 GW of coal-fired power plant retirements by 2020, with facilities in the Appalachian region to be among the hardest hit (see Daily GPI, March 20). A number of gas-fired power plants have been announced in Pennsylvania, Ohio and West Virginia that could eventually fill the void and provide operators with another outlet for locally produced gas (see Daily GPI, May 16; April 22; April 17).

A closer look at production data in Pennsylvania from January-June shows that new drilling, backlogged wells waiting on pipelines or completion and others likely to return to production after a period of inactivity will likely drive volumes in the state to a new record by the end of the year, MCOR said.

In the first half of 2014, gas production in the state broke another record with output of 1.94 Tcf, or about 520 MMcf more than the 1.42 Tcf reported in the year-ago period. Operators produced 3.3 Tcf of natural gas last year, mostly in the Marcellus Shale (see Shale Daily, Feb. 20). In February, MCOR said it expected production to reach between 3.8-4.5 Tcf this year, an estimate that remains unchanged.

In its latest analysis, the center said new drilling in Pennsylvania appears to be running 10-15% ahead of this time last year, with 1,200-1,400 new horizontal wells anticipated. Beyond the new wells expected, a significant inventory of backlogged wells are not reporting production. Roughly 1,750 wells, or about 525 more than at the end of last year, are backlogged, MCOR found.

Another 550 wells are designated by the state as regulatory inactive, which means they have five years to return to production or be plugged. MCOR added, however, there is no clear guide as to how many inactive wells might come back online this year. It also couldn’t say how many backlogged wells might be tied-in or completed this year.

In a commodities research note released in May, which analyzed last year’s data, Barclays Capital found that four of the five counties with the greatest number of backlogged wells are in northeast Pennsylvania, where dry gas production has been the norm (see Shale Daily, May 5). Given that operators are aiming for wetter targets in southwest Pennsylvania and oilier formations elsewhere in the country, the bank said it could be some time before the northeast inventory is reduced.

Still, a significant inventory and a sizeable number of inactive wells will likely help to grow Pennsylvania’s production stream in the coming months, MCOR said. Unconventional horizontal wells reporting production since July 2010, the center said, have averaged about 1.6 Bcf of natural gas and helped increase annual output by more than 600% since then.