As oil refiners worldwide seek to distance themselves from Russian crude imports, a consultancy recently predicted a “rebalance” in the global crude oil trade. 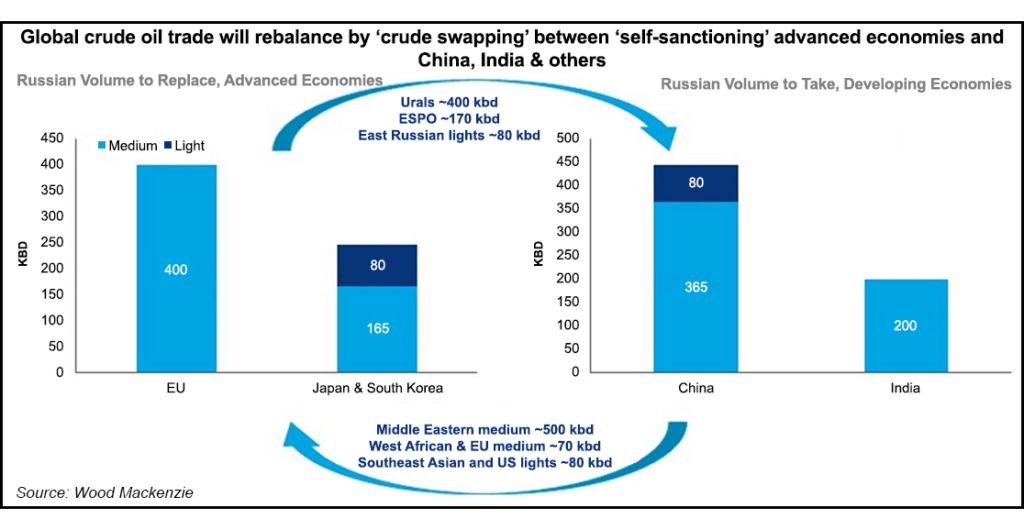 After the United States imposed sanctions on Russian crude oil following the invasion of Ukraine, European companies followed suit with curbs that have displaced up to 1.2 million b/d of Urals crude, Wood Mackenzie stated. Urals is Russia’s most common export crude grade.

Sun said buyers in the European Union, Japan and South Korea “could ‘swap’ about 650,000 b/d of Russian crude oil…with similar grades and volumes predominantly from the Middle East procured by China and India.”

“This reshuffling is attractive at current Urals discounts but in the near term, refiners face challenges with contractual obligations with Middle Eastern producers,” said Sun.

Thanks to pipeline links and waterborne delivery access, China’s state-owned and private refineries are key destinations for Russian medium crudes such as ESPO and Urals, Wood Mackenzie noted. Moreover, it stated the steeply discounted Urals price represents an opportunity for China to fill its declining strategic oil reserves.

“The Russia-Ukraine conflict has made Russian grades commercially attractive, but as we have observed in recent weeks, auctions have been canceled due to few participations,” said Sun. “Also, we did not see China take up European Urals cargoes. Even for eastern grades, a number of transactions have now gone private.”

China and India collectively process about 5 million b/d of Middle East medium crudes, comparable in quality to Urals, on long-term contracts, said Wood Mackenzie. The firm added that both markets would need to displace crude imports from Africa and the United States to accommodate larger Russian volumes.

“While expiring term contracts with Middle Eastern suppliers will open the door to additional Asian purchases in the coming months, the quality of Urals crude and the freight costs associated with the long transit time will be an impediment for many refiners in Asia,” data, analytics, and technology firm DTN’s Troy Vincent, senior market analyst, told NGI.

Vincent said the swap scenario that Wood Mackenzie laid out “would help cushion the blow to the global oil market from a loss of Russian barrels.” However, he added the potential 650,000 b/d of swapped volume “would still fall severely short” of 2-3 million b/d of Russian crude expected to soon be displaced on the global market.

It “therefore still points to a scenario where Russia will have to shut in production amid slowing exports and brimming storage,” he said.

“These displaced barrels are very unlikely to end up in North America,” particularly after Congress’ recent vote to officially ban Russian energy imports, he said. “On the margin, this is additional supply dislocation which should push prices higher, but headlines related to the situation in Ukraine, Iran nuclear deal, stock releases, etc. will have a larger impact on near-term prices.”

“That those barrels continue to supply the global marketplace is the key, no matter where they are going,” Texas Alliance of Energy Producers’ Karr Ingham, petroleum economist, told NGI, referencing the market rebalance noted by Wood Mackenzie. “Losing those barrels entirely would clearly continue to put additional upward pressure on prices.”

In that vein, more developed oil-importing countries “can stand by their sanctions, but their consumers don’t have to bear the full brunt of those lost barrels,” he said.

Ingham added that “crude oil prices paid to U.S. operators won’t be as high as it would be if those barrels were entirely removed from the market, but U.S. producers are not complaining about price either way right now.”

He added the swap could displace U.S. crude exports to China and India, possibly diverting those cargoes to Europe.

“Again, though, at least for that 650,000 bbl the size of the total pool is unchanged, it just goes to different places, meaning at least in theory price is generally unaffected,” Ingham said.

Alluding to higher freight costs and other factors, he added, “That won’t be the case entirely, because this clearly introduces some inefficiencies into that trade scenario.”

Given the extent of sanctions, which affect considerably more than 650,000 b/d of Russian crude, Ingham said the global oil market will remain undersupplied, providing an incentive to ramp up U.S. oil production.

He said that Permian Basin producers in Texas and New Mexico, accounting for about 45% of total U.S. crude production, “are the most viable options for near-term supply growth. The Permian has recovered all production lost during Covid and is producing at record levels now. Texas will move into record production territory later this year. So it is happening here, but it needs to happen faster.”