Following up on a similar filing last week, Rover Pipeline LLC on Wednesday again urged FERC to issue a number of pending in-service authorizations for its 713-mile, 3.25 Bcf/d greenfield project by Thursday. 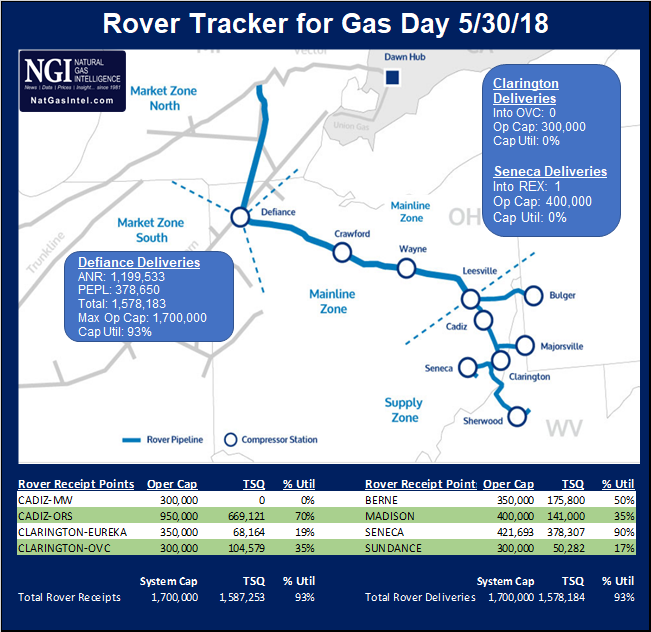 The operator asked that the Federal Energy Regulatory Commission approve service on the Burgettstown Lateral, Majorsville Lateral, Supply Connector Line B and remaining Mainline B segments by 9 a.m. CT Thursday.

“With construction of pipeline and related facilities now complete, gas on the remaining facilities can begin to flow immediately,” the operator told FERC. “Given the substantial progress Rover has made toward restoration, and the commitment Rover has made to complete the restoration work, Rover respectfully submits that it is not in the public interest to prevent gas from flowing.”

The operator cited large inventory deficits and the need to refill storage in time for the 2018-2019 heating season as a compelling reason to enable the additional volumes to flow on Rover, which has been transporting about 1.6 Bcf/d east-to-west across Ohio to interconnects with ANR and Panhandle Eastern.

“Approval of the requested Rover segments could account for roughly 28% and 17% of the daily storage injection deficit as compared to the five-year average and last year’s inventory levels, respectively,” Rover said.

Earlier this year FERC took issue with Rover’s failure to complete restoration work on time at its Mainline compressor stations 1 and 2.

“Rover stresses that it remains fully committed to completing all restoration work in the times set forth” in a supplemental filing submitted last week, the operator said Wednesday.

Management for Rover backer Energy Transfer Partners LP said during a May 10 earnings call that they planned to bring the remainder of the project into service by June 1.

Rover, designed to transport Marcellus and Utica shale gas east-to-west to reach markets in the Midwest, Gulf Coast and Canada, headlines a slew of new Appalachian takeaway expansions expected to come online over the next few years. Anticipated supply growth from producers drilling to fulfill commitments on these expansions has been cited by analysts as a factor in recent long-term bearish forecasts for natural gas prices.

Genscape Inc. analyst Colette Breshears said recently that the firm had “no good estimates” for when FERC would authorize service on the remaining portions of the Rover project.

“Continued earth movement/slips along the Burgettstown, Majorsville, Sherwood and TCO laterals may impact FERC’s approval of those lines, which will impact the addition of supply paths to Rover. Mainline B, which adds the rest of Rover’s throughput to bring it from 2 Bcf/d to 3.25 Bcf/d, doesn’t seem to have any major restoration or remediation efforts left to hurdle,” Breshears told clients last week.

Genscape doesn’t expect the start-up of Rover’s remaining facilities to coincide with any near-term ramp-up in production out of the Ohio, southwestern Pennsylvania and northern West Virginia areas the project is designed to serve.

“Instead, expectations are for gas to reroute from current pipelines to flow onto Rover, especially at Majorsville and Sherwood, where processing plants are connected into TCO, Tetco and Dominion,” Breshears said. The start-up of the Burgettstown Lateral — expected to be supplied by the new Harmon Creek and Revolution plants — could bring some new production online, but these volumes should “grow slowly as these systems turn on for the first time.”