There hasn’t been much to see by Pennsylvania oil and gas producers, who have adopted a “wait and see” approach to the Pennsylvania Supreme Court’s decision on Act 13 returning zoning authority to local entities, according to the head of the Marcellus Shale Coalition (MSC). 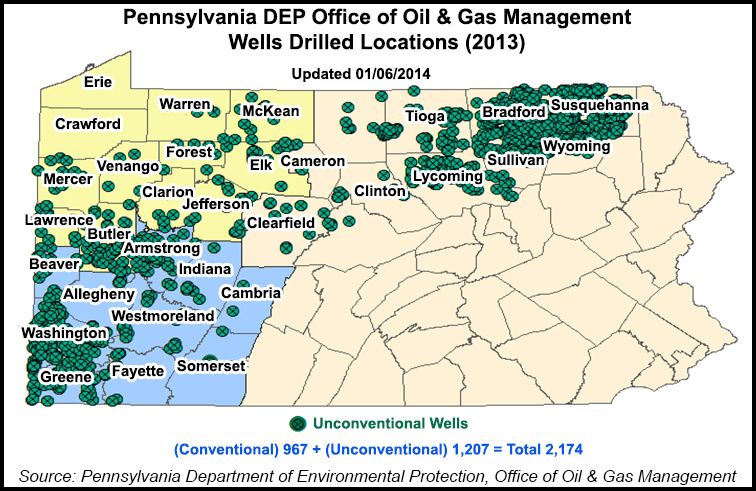 “Certainly the membership is concerned, but I think we’re waiting to see how communities will respond to this,” MSC President David Spigelmyer toldNGI’s Shale Daily. “If municipalities, boroughs and townships begin to ramp up and do something more aggressive that’s certainly of concern, but to date, we really haven’t seen that, so I think our focus is to continue to communicate with our townships and work closely with those we’ve worked with over time. From that perspective, it’s kind of status quo.

“There’s been a trust level gained. Frankly, if you look at our polling data, you’ll find some of our strongest polling comes back in the communities in which we’re actively drilling,” he added. “We do statewide polling and our numbers are far better in areas where we’re actively drilling. Folks have gotten accustomed to and know our company; working closely with communities has certainly made a big difference.”

A poll released last week by Franklin & Marshall College in Lancaster, PA showed that 64% of Pennsylvanians favor the gas-drilling industry, while just 27% said they opposed it, Spigelmyer said.

The oil and gas industry has had several years to build its reputation in the state and the relationships it has fostered with local communities should serve operators well as they navigate a new landscape following the court ruling (see Shale Daily, Dec. 20, 2013).

Meanwhile, the fallout continues in the wake of the high court’s ruling on Act 13, and the state last month chose to challenge it (see Shale Daily, Jan. 3). In the meantime voters in Robinson Township, who joined six other townships across the state to bring the lawsuit against Act 13 in 2012 (see Shale Daily, Oct. 22, 2012), have cast out two supervisors and instead voted-in two who support the oil and gas industry. Lawyers there are working for the court’s permission to be dropped as the lead plaintiff in the case.

With developments like these, Spigelmyer said he’s more concerned for the operations of other industries that could be affected by the ruling.

“That’s what is most concerning about this, it’s more broad than shale gas development,” Spigelmyer said. “I think, frankly, that the shale industry might have a bit of a leg-up because we’ve been working with these communities since we’ve been here. Those industries that are now thrown into a heightened area of local regulation, as a result of that ruling, might have some work in front of them.”

The MSC has grown to include hundreds of exploration and production, midstream and supply chain companies since it was founded in 2008, and is today one of the Appalachian Basin’s most influential trade organizations,

Spigelmyer, former chairman of the board at the MSC, was elected to replace the organization’s first president, Kathryn Klaber, last October (see Shale Daily,Oct. 22, 2013). He told a crowd in Canonsburg, PA, on Friday that under his tenure, the organization would step-up its dialogue with state legislators, local communities and opposition groups to continue building the industry’s relationships across the state (see Shale Daily, Feb. 10).

On other fronts, Spigelmyer remains confident that the Marcellus Shale play will continue to be a leader in the unconventional oil and gas boom unfolding across the country. He said that in 2008, the state’s industry produced just 182 Bcf of natural gas, adding that today operators produce that amount in just 13 days.

“There continues to be a very constrained market in terms of pipeline capacity,” he said. “Certainly in cities, like Philadelphia, Washington, D.C., Baltimore, New York and Boston, they’re all very pipeline constrained and that’s where you’ve seen significant swings in pricing.”

But Spigelmyer said he believes the industry is well-positioned to continue growing and head-off that sort of volatility.

“I think the Marcellus is a leading contributor on dry gas production across the country,” he added. “The great part about the Marcellus is its proximity to market — we’re right in the center of one of the hottest consuming regions of the United States. Liquids production in southwest Pennsylvania, eastern Ohio and northern West Virginia have made extraordinary contributions to lessen our dependence on foreign oil.”

As production increases in the Marcellus, though, some Pennsylvania lawmakers have once again stepped up their push for a severance tax on operators to replace the state’s impact fee, which charges a flat rate for each unconventional well drilled in the state (see Shale Daily, Jan. 28). Spigelmyer said he couldn’t speculate on whether that effort would gain enough momentum to finally become a reality in Pennsylvania.

“I’m not going to speculate on that. All I can say is that we’re going to continue working with legislators and making significant contributions to the Commonwealth,” he said, seeming somewhat irritated about the notion of a new tax. “I think the impact fee has been an extraordinary benefit to those communities that house drilling and welcome it. The money that goes to the Marcellus Legacy Fund as part of it has benefited communities all over the state as well.”

Spigelmyer pointed out the state has collected more than $2 billion in combined taxes from the unconventional industry, collected $406 million in impact fees thus far, paid $750 million to repair and build new roads and generated another $40 million in revenue for the state from permitting fees.