Next year will be a “breakout year” for U.S. exports of liquefied natural gas (LNG), with cargos expected to emanate from four terminals. But don’t expect much help from that for natural gas prices, Raymond James & Associates Inc. said Monday. 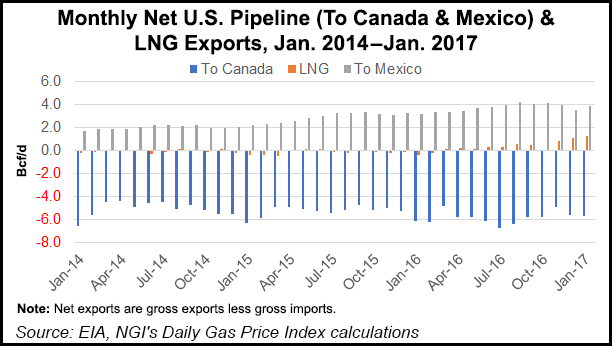 Cheniere Energy’s Sabine Pass terminal kicked off the Lower 48 LNG export era. It is expected to be followed by Dominion’s Cove Point, Kinder Morgan’s Elba Island, and Sempra Energy’s Cameron LNG, as well as increasing exports from more trains at Sabine Pass. Then coming in 2019 will be the Freeport LNG terminal as well as Cheniere Energy’s Corpus Christi terminal.

“All of these six projects (with about 10 Bcf/d of aggregate nameplate capacity) are under construction, so there is good visibility on completion timing,” Raymond James said. “However, the pace at which the projects gradually ramp toward full capacity is more uncertain.”

Totaling up all of the announced projects, not counting canceled efforts, Raymond James arrives at about 75 Bcf/d of theoretical export capacity at full buildout of all the projects in the United States and Canada. Obviously, they won’t all come to pass. “…[P]lenty of developers have been trying to jump on this rather full (and overhyped) bandwagon,” the analysts said, adding that they still expect 12-15 Bcf/d of export capacity to be developed.

The United States is way ahead of Canada in developing export capacity. This is partly because early U.S. projects are at brownfield sites where import capacity had previously been developed. It’s cheaper and quicker to add liquefaction to an existing import site than it is to build a greenfield project, like those proposed in Canada, Raymond James said.

Efforts to expedite LNG export regulatory approvals in the United States are likely to not mean much as there are already projects in the Lower 48 that have been permitted that are being delayed for economic reasons. Tax reform that favors U.S. exports would be another story, though, the analysts wrote.

For now, the major export market for U.S. natural gas still is Mexico, with about 3.7 Bcf/d traveling there via pipeline. LNG exports won’t surpass gas sales to Mexico until 2019, Raymond James predicted.